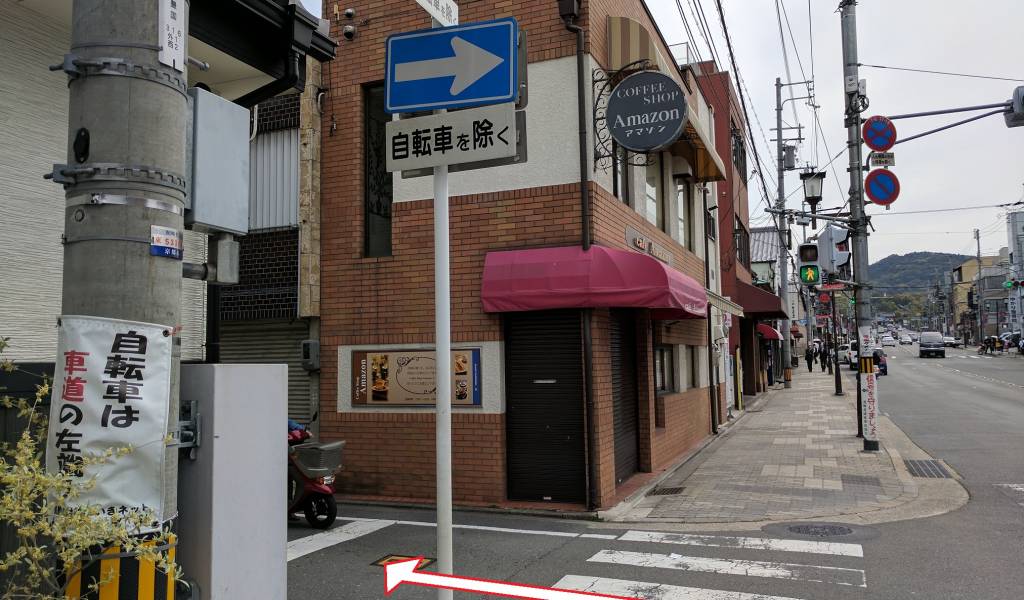 Experimental travel is an idea developed by Frenchman Joel Henry as a way to explore places without doing the usual tourist activities of sightseeing and shopping. It’s heavy on whim, chance and humor, and it’s a great way to explore your own town. Since Kyoto has a grid layout, it’s perfect for “alternating travel”—taking the first right, then the first left, then right, then left, and continuing until it’s no longer possible. Let’s try it and see what we can find!

The starting point of this round of alternating travel is Exit 2 of Shichijo Station on the Keihan Line. Usually, tourists exiting this station would head to the National Museum of Kyoto or Sanjusangen-do, the long wooden building with 1001 statues of the Buddhist goddess Kannon. But experimental travel scorns these typical tourist attractions! We’re going to head to the back streets instead!

Tip: If you want to increase the chance element of alternative travel, bring a dice and roll it to decide which train station exit to take. Flip a coin to decide whether to turn left or right first.

From the station exit, we turned right onto Shichijo Street. Already, we can see some tourists making their way east towards the usual sightseeing spots.

But not us! We turned right first, so next we need to turn left:

And immediately we find ourselves in the back streets of Kyoto, in a residential area. It’s quieter, with fewer cars and people.

It’s a chance to breathe a little, slow your pace to a stroll, and just enjoy everyday life. Be fascinated by the pot-plant gardens on almost every doorstep, the little decorations residents leave on their windowsills. Check out the dusty menus of tiny restaurants that are only patronized by locals and not even visible on Google Maps. Maybe bring your hands together at one of the numerous Buddhist ojizō that dot Kyoto’s neighborhoods.

Left and right and left again…

It’s time to turn right again! This time the street is even narrower than before. But it’s only a short street. Soon we’ll turn left again onto a street that runs parallel with our first back street. In the distance, we see a rare sight in Kyoto: a divided road! Usually the streets are so narrow that there isn’t even a sidewalk for pedestrians! It’s interesting, and it just so happens to be the next right turn, so let’s explore it more.

Turns out that this wide divided road is the approach to Toyokuni Jinja—a shrine dedicated to warlord Toyotomi Hideyoshi. There are streets to the left, so we’ll turn without exploring the shrine, but before that, on the right ride, is Mimizuka.

The name translates as “Ear Mound”, but it was originally called “Nose Mound” (Hanazuka) and, yes, it was basically a mound of noses. Specifically, the severed noses of Chinese and Korean soldiers killed by Toyotomi’s invading forces in the 1590s. The noses were cut off by Japanese warriors because it was easier than carrying decapitated heads. Back home, the Japanese warriors received remuneration for the number of soldiers that they could prove they had killed. After the noses had been counted, they were collected and enshrined in this mound, and Toyotomi instructed Buddhist priests to pray for the souls of the dead.

It’s a horrifying monument to past Japanese aggression, and as a result, it’s not very well publicized in tourist guides (with the exception of guides for Korean tourists, who are often seen \ visiting the mound). Many Japanese people don’t even know about the mound.

Mimizuka is a prime example of why alternating travel is a fantastic way to discover things that aren’t typically considered by tourists. We would have never even heard about Mimizuka if we didn’t decide to wander through the back streets of Kyoto.

Back on the road again

Back to our alternating route, and we once again find ourselves in residential back streets. This being Kyoto, there are a number of machiya houses to admire, especially as we get closer to Gojo Street.

As we wandered, we enjoyed the architecture and the weather, we befriended cats and greeted the locals. We dodged postmen tearing around corners on scooters. We encountered dog-leg turns, roads that turn left just when it was time to turn left (convenient!) and ridiculously narrow passageways.

We also pass the Higashiyama Tax Office, which was just as well, because I needed to chase them up for my tax return. (That may or may not have been the reason I choose to do alternating travel in southern Higashiyama in the first place…)

Now, as we approached Gojo Street, it seemed like we’d be able to wander for hours, but hang on—what’s this?

A small residential appeared on the left, and since that was the next direction to take, we turn. Only to find a dead end in a little enclave of new houses.

End of the adventure

This round of alternating travel has come to an end. It was about 1.5 km, with a few double-backs and a few pit stops. Undoubtedly the most interesting part of the route was Mimizuka, but it was also just a pleasant stroll that offered a lot of scenery and ideas (like the keema curry restaurant for lunch). And, yes, I sorted out my taxes too.

One of the fascinating aspects of the alternating travel method is that we would get an entirely different route if we had just turn left out of Shichijo Station, instead of right. Or if we took Exit 6 instead of Exit 2. The possibilities are limitless. And of course: walking is entirely free.

Try this cheapo way of exploring your town!