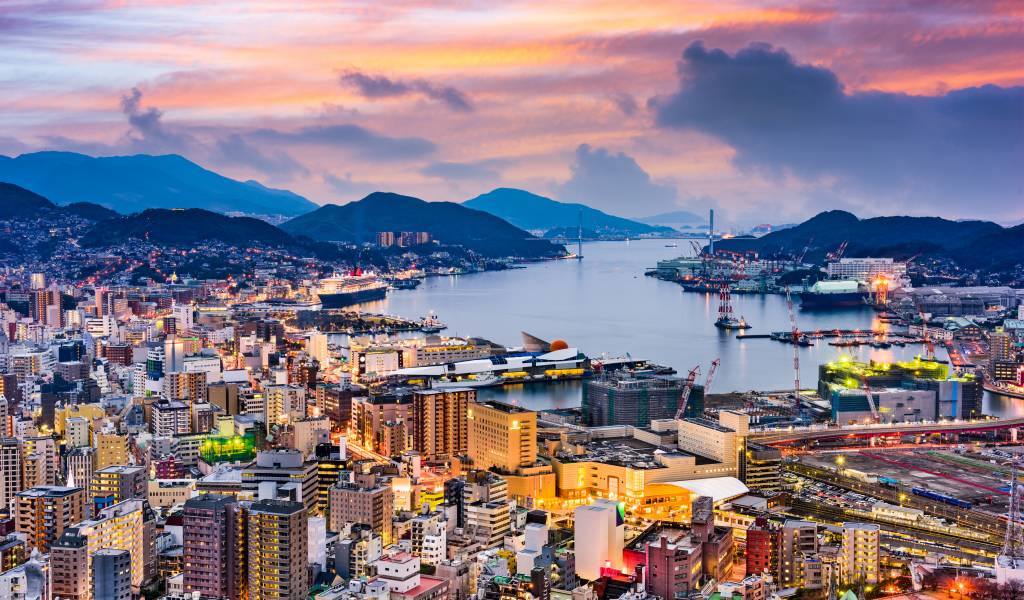 Cities and Towns in Nagasaki

Nagasaki is located at the very most west of Japan and is neighbored by Saga prefecture at its north border. Its largest city is found on the island of Kyushu and is a site of rich historical significance.

Nagasaki Airport, situated 18 km (11 miles) away from the city, has 476 domestic and 21 international flights per day with 14 different airlines. Flights are available from Fukue Airport‎, Haneda‎, Iki Airport‎, Incheon Intl‎, Itami‎, Kansai International Airport‎, Nagoya‎, Naha Airport‎, Osaka Kobe Airport‎, and Pu Dong‎. Low-cost carriers such as Skymark or Solaseed Air offer trips to Nagasaki for 10,000 yen, give or take a few thousand yen. ANA and JAL are far more expensive, and prices of flights can increase during peak times.

Another option is to take the Shinkansen (bullet train). Although there is no train that takes you straight to Nagasaki, you can take the Sanyo Shinkansen to Hakata Station and then the Kamome Express, which will get you to Nagasaki Station in under two hours. Making this trip from Tokyo takes about seven and a half hours and costs roughly 26,500 yen. A JR Pass is good value for this journey, if you can get one.

Although it takes longer, a bus is also available at the Hakata Station Bus Terminal that goes directly to Nagasaki Station. Of course, there are other destinations within Nagasaki Prefecture besides the station. Various ports including Nagasaki Airport, Fukuoka Airport, Hakata Port and Sasebo Port have planes and ferries available to take people to the popular islands, including the Goto Islands, Iki island, or Tsushima, in a maximum of 2 hours. Nagasaki Port is a mere 10-minute walk from the station, so it is very easy to access, and to get to Hakata Port (in Fukuoka), you can take the Nishitetsu Bus #47 or #48 from JR Hakata station to its last stop.

Once you arrive at Nagasaki, taking a sightseeing trip by public transportation is highly recommended. The old style streetcars are an easy way of getting around and enable you to enjoy the scenery of the town as you travel. There is a 500 yen “One-day open pass” available at the City Tourist Information Center at Nagasaki Station, at major hotels and travel agencies. If you choose to take these streetcars, you will have to plan your own tour, but it lets you explore the area at your own pace and choose how long to spend where. If planning your own tour and doing research is not your ideal vacation, there is a bus tour for 3500 yen that takes you around the popular sightseeing areas for more than 4 hours. The only problem is that the guide is only in Japanese, so non-Japanese speakers will not be able to understand the explanations.

There are also cruises such as the Nagasaki Harbor Cruise from March to November for 2,000 yen, and the Gunkanjima Island Landing and/or Cruise for 3,300 yen to 4,300 yen which will take you to the island (aka Hashima Island) that is well known for being an inhabited ghost island that was formerly used to mine coal. Hashima Island was bought the Mitsubishi Corporation three years after of its discovery by the Fukahori Family in 1887, and then further excelled as a shipping enterprise to become one of the leading corporations today. The island is packed with concrete housings to prevent damage from typhoons, that had been known to be the first large scale concrete buildings in Japan. Coal miners inhabited this isolated island, and in 1959, the residential area of Hashima Island was thought to be the most densely populated area in the world with a density of 1391 per hectare. By 1974, the source of coal had run out which led to the lack of use for the island, so the island was completely evacuated and left to decay into the ghostly island it is today.

Where to Go and What to Do:

Well known for its involvement in the entrance of foreigners to Japan during the 1500’s, Nagasaki houses many foreign-influenced establishments and residences that are now very popular tourist sites.

For those interested in Japanese history, Dejimamachi is a great and compact destination. It is the artificially created port created by local merchants to segregate the Dutch traders and missionaries in 1634. It served as the only window to trade between Japan and the world as Japan was under the isolationist policy created by the Tokugawa Shogunate until the 19th century. The restoration of Dejima had been commenced in 1996, and is still under further development. Currently, life size replicas of houses and typical items that would have been seen during the Isolation Period are displayed. There are also museums within Dejima that exhibit archeological findings and other historical aspects to Dutch life in Dejima. Not only is the Nagasaki Dejima Wharf is a great place to drop by for food and shopping, it is an ideal area to relax by the harbor.

From October 7-9, the Suwa Shrine, a major Shinto shrine in the northern area of Nagasaki city has a festival celebrating the 9th day of the 9th month of the lunar calendar. The festival incorporates both Chinese culture and Dutch culture, which came along with the traders who arrived at Dejima. In 1571, the Portuguese established Nagasaki as a major trading post, which then led to the flow of Chinese culture into Nagasaki. One unique aspect to this festival is that the performances are prepared by 5 to 7 different districts of Nagasaki, so every district is only able to perform once every 7 years. The main attractions to this festival are the dragon dances and performances with large floats. Although it is possible to view the dances without a ticket, all four stages are usually overflowing with people and their reserved spots, so it is recommended to arrive early or to purchase a ticket for a seat.

All Articles about Nagasaki

Things To Do in Nagasaki

Getting Around in Nagasaki