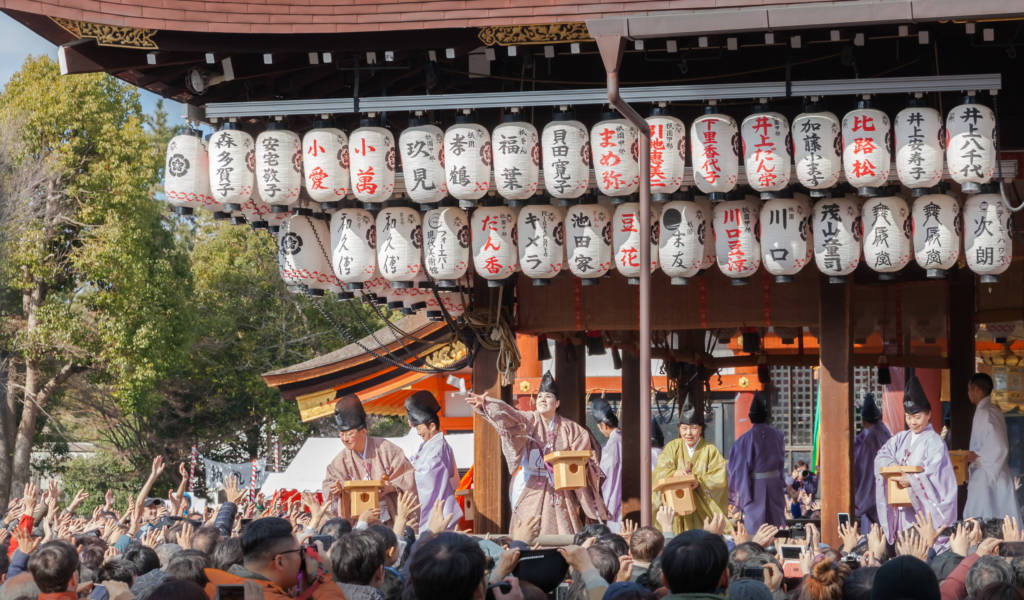 Snow, fire and even plum blossoms mean there’s plenty to see this month in Japan. The festivals are a pick-and-mix of purification rituals and playful family events, with seasonal celebrations thrown in. February is a month filled with winter wonderlands in the form of Japanese festivals celebrating winter, oysters, demons and the Chinese New Year! If it’s the snow festivals you’re after in particular, check our extra article here!

A chance to see the most unusual natural snow creations of the season, the festival weekend is an added bonus. While the monsters are illuminated in winter evenings, this weekend features a parade of professionals and familiar characters skiing with flaming torches as well as a fireworks display.

A winter wonderland appears beside the shores of Lake Towada for three weeks every February. There is a short fireworks display (about 10 minutes) each night from 8 pm as well as illuminations.

Set up shop at any of the 400 grills and enjoy all the oysters you could ever hope to eat before collapsing on one of the 1,600 seats. The event will be held on the grassy square at 99 Islands Pearl Sea Resort  in Sasebo. You can buy your oysters fresh and grill them yourself if you feel like getting involved as everything you need—from charcoal to oyster knives—will be available! This year the festival is taking place on all Saturdays, Sundays and public holidays throughout February.

A great chance to see the maiko and geiko (geisha of Kyoto) without forking out terrifying amounts, this Setsubun ceremony is pretty special. The first day features dancing and bean-throwing while the second has a lion dance too.

An annual celebration of the arrival of spring, this is an age-old ceremony held across Japan to drive evil spirits from the house. It’s common to see people dressed as demons being herded from homes and businesses by occupants throwing beans. At this event, traditional prayer sticks are thrown into the fire in a Goma-daki ceremony.

This is one of the most well-known Setsubun celebrations in Kyoto and offers a cleansing ritual, an exorcism performance complete with evil oni (demons) and even maiko and geiko (the geisha of Kyoto) who throw beans into the crowd. The day ends with a fire ceremony, and while it will no doubt be busy, it’s worth the crowds.

One of Japan’s most famous festivals, the Sapporo Snow Festival spans six days and is filled with food, snow and sculptures. Huge creations are carefully crafted in Odori Park from international and Japanese sculptors and you can find a huge selection of food trucks with warming food and drink to keep you going. There are multiple sights to explore and we have a guide on enjoying the festival here!

Another smaller, more local snow festival when compred to the Sapporo one, this event is one of the largest in Tohoku. There are tasy local dishes to try like milk ramen and amazake (a sweet drink made from rice, served hot) as well as sledding, scultpures and nearby onsen to enjoy.

Famed for its oyster supply, Hiroshima celebrates this oyster fest every year with increasing popularity. Although oysters are often prohibitively expensive, here they’ll set you back a mere ¥100 a piece so you can gorge to your heart’s and stomach’s content. There will be stage performances of taiko drumming to keep you entertained too!

A very small town with a reputation for its annual snow festival, Tadami certainly knows how to make the most of the seasonal weather. A great local alternative to the giant Sapporo Snow festival, this one has scultpures, carvings and taiko performances as well as firework displays.

Decorating the already-impressive castle with over 200 lanterns, this event is perfect for a relaxing evening stroll in the snow (if there is such a thing). There will be snow scultpures and performances during the day as well as a kid-only snow slide (dissapointing, we know).

Deep in the snowdrifts of northern Hokkaido, this snow festival has towering sculptures which are tastefully illuminated at night. There are family games, a warming selection of food and drink stalls to choose from and plenty of creations to pose with, just dress up warm!

An annual event with a long but unclear history, this festival sees dozens of large paper balloons released into the sky. Decorated with traditional designs and the larger balloons are truly amazing, while smaller ones are covered in wishes by locals and visitors.

Another of the more unusual festivals, this one involves local men dressed in straw coats (the festival’s namesake) pretending to be birds. The tradition originated in the 17th century and begins in front of the Kaminoyama Castle. The dancing straw men are doused in cold water and are gradually herded into the city for some warming sake.

One of the more sinister-looking festivals, the Namahage Sedo Festival involves demons, bonfires and a whole load of screaming children. The festivals are terrifying to say the least and if you’re in town, be sure to go to the Nahagekan Museum to see a variety of the costumes used.

Another of the famed naked festivals of Japan, this event has a history going back 500 years—so you can be sure the nakedness is cultural. Watch over 9,000 participants compete to catch the two lucky sticks called shingi as well as bundled willow strips thrown to the crowds by priests. There is a primary-school-aged version from 6 pm for the kids.

Highlighting the traditional snow structures called kamakura, which are like snow igloos (not ice) and house candles and sometimes people, this festival is pretty magical. Held for over 400 years, this festival has perfected the art of kamakura, and each has a small altar with rice and winer offerings to the Gods.

Held on February 20th each year without fail, this festival celebrates the women and girls who sacrificed themselves to save the city from the disasters of the Yodo River. Maintaining the traditional styles of the time, the parades involve ancient costumes and are a real sight to behold. The festival has been designated an Intangible Folk Cultural Asset of Osaka Prefecture. 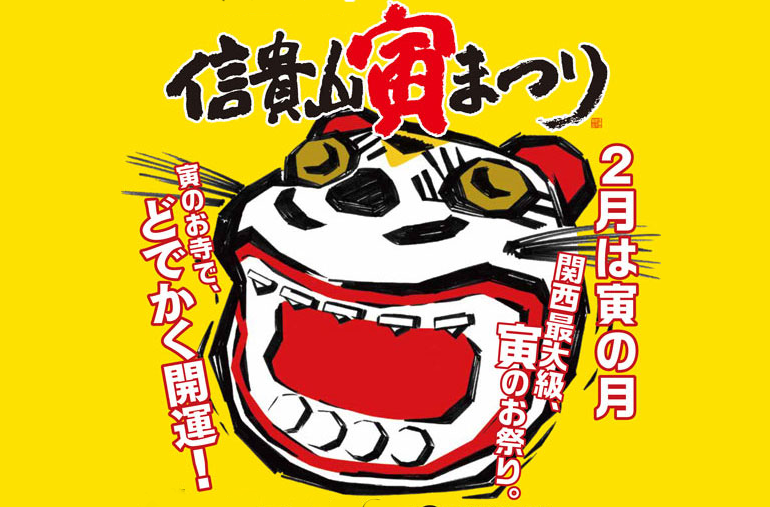 Traditionally known as the month of the tiger, it’s no surprise February has a whole festival centered around the striped beast. Between 11 am and 12:30 pm, 50 tiger boys and girls parade with tiger shrines accompanied by traditional taiko drumming and Japanese instruments. The children are all born in the year of the tiger, lending them their rightful roles.

Centred around the traditional Dondo-yaki ceremony held in the New Year, this festival takes place on the banks of the Kuzuryu River. New years ornaments are burned while local artists perform on elevated wooden stages that are carried around the city. The traditional fire festival has been held for the last 300 years and always draws large crowds.

A sign of the start of spring, the plum blossom transforms the already impressive Kitano Tenman-gu Shrine into a seasonal treat. While the blossom will obviously be around for a week or two, the festival day features a tea ceremony with apprentice geiko (Kyoto’s geisha) called maiko, but tickets are limited, so be there on time.

Some of the longer running events which cross over multiple months: