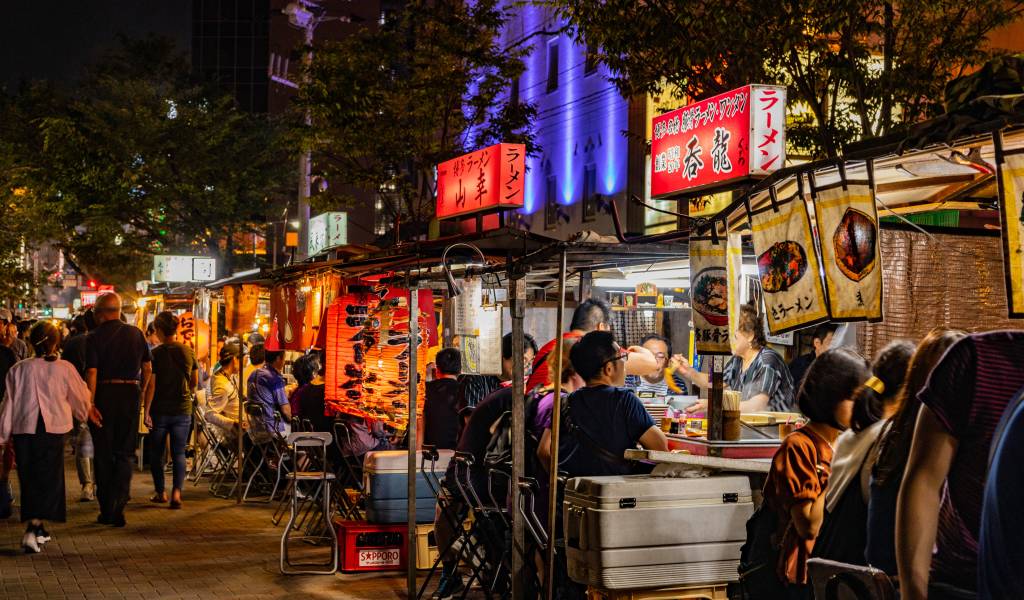 A Quick Guide to Visiting Fukuoka: Lively, Yet Laid Back

Fukuoka is Kyushu’s largest city—and a growing, lively-yet-laid-back one. It’s a stunner of a place, mixing ancient and modern in a relatively compact area, with some of the finest ramen you’ll find.

It’s literally a city of two halves: the towns of Hakata (east of the Naka River) and Fukuoka (to the west) were joined together in 1889. People still use the name Hakata, but old Fukuoka is now referred to as Tenjin. Confused yet?

To be very simplistic, Hakata is for business and Tenjin is for pleasure. But whatever part of Fukuoka you find yourself in, there’s something to enjoy. And if not, the subway will whisk you somewhere else in a jiffy.

What to see in Fukuoka

If you can bear the summer heat, try being here for the Gion Yamakasa festival, which culminates around July 15th with a race of decorated floats pushed along a 5km route. If you prefer your weather not set to ‘blast furnace’, head to the popular Kushida Shrine  (link in Japanese) at any time of year to see some of the festival floats.

Malls and shopping centres in Fukuoka

Round the corner from Kushida Shrine is Canal City shopping center, a vision in pink concrete that has a cinema, theater, game center, cafes and restaurants as well as shops. Be sure to check out the wall of TV screens, which looks for all the world like a 1980s MTV ident. A canal runs through the middle which is pleasant to sit by, especially on a weekend when there are often free music performances.

To soak up some culture head to the Fukuoka Asian Art Museum (entrance ¥200), a few blocks from Kushida Shrine. The museum holds nearly 3,000 works by modern and contemporary artists from across Asia and is considered one of the finest collections of its type in the world.

For a taste of Fukuoka of the past, the Hakata Machiya Furusato-kan recreates life in the Meiji and Taisho eras. You can see the restored Machiya Hall for free, but for exhibitions and demonstrations of arts and crafts it’s an extra ¥200.

Shrines and parks in Fukuoka

Temple junkies should make sure to add two places to their list of places to visit. Shofuki-ji was founded in 1195 and is the oldest Zen temple in Japan. You can’t go in the buildings but the grounds make for a pleasant wander. Tocho-ji dates back to 806 and has Japan’s largest wooden seated Buddha. The statue is only a couple of decades old but its size (nearly 11 meters tall) is impressive. There’s also a beautiful five-story pagoda in Tocho-ji’s grounds.

You might need a rest after all that sightseeing, so head to Ohori Park. It’s set around a lovely lake, which you can walk around or across on a series of islands and bridges. It’s partly the old moat of the castle, the remains of which are nearby. The park is also home to Fukuoka Art Museum and a beautiful Japanese garden (entrance fee ¥240).

If you want even more relaxation, Yunohana Onsen in Tenjin has indoor and outdoor baths for the very reasonable fee of ¥720 (take your own towel if you don’t want to rent one). It’s not that common to find cheap onsen in the middle of cities, particularly not ones with multiple bathing options. Brush up on your onsen etiquette and get soaking.

What to eat in Fukuoka

Fukuoka is the place where tonkotsu ramen comes from. That meaty, salty broth, with melting pork belly and noodles that’s so slurpingly addictive? Yes, this is its homeland. It’d simply be rude not to eat some.

Ippudo is a global ramen chain that you can find in London, New York and Sydney, but it started out in Fukuoka. The restaurants here are typical counter joints and the ramen tastes the same as it does in Ippudo the world over, but it’s still fun to see where it all began.

Ganso Nagahamaya has been serving ramen for over 60 years. You can walk there in about 10 minutes from the castle ruins, and a bowl costs ¥500.

If you want to be spoiled for choice, there are eight restaurants in Ramen Stadium on the fifth floor of Canal City. The restaurants swap around every now and again, so there’ll always be something fresh to try.

If you’re sick of ramen—hard to imagine—there’s one more famous sight in Fukuoka that you can try. Every evening, food stands called yatai pop up on the streets across the city. You’ll find a cluster at the bottom of Nakasu Island but you’ll probably stumble across others when you’re out and about.

Yatai seat a handful of people and serve things like yakitori (grilled meat skewers), hot pot or ramen, with plentiful booze flowing. Find one that looks to your liking, grab a seat (or join the queue) and chow down. And if you’re in the Nakasu area, you’re already in the right place to explore Fukuoka’s nightlife.

Fukuoka Airport is just a couple of subway stops from Hakata and Tenjin stations, making it a perfect gateway to the city. Of the low-cost airlines, Peach and Jetstar fly to Fukuoka from Tokyo Narita—and Skymark actually flies from Tokyo Haneda, avoiding the long trek out to Narita, which is quite exciting. JAL and ANA also fly from Haneda, for those who like to pay with the soul of their first born rather than reasonable amounts of money.

Fukuoka is actually closer to Seoul than it is to Tokyo, so plenty of international flights arrive here from South Korea’s Incheon airport. Other Asian cities are connected directly, and you can fly from Europe with Finnair during the summer.

Trains and Shinkansen to Fukuoka

Pro tip: If you’re heading to Fukuoka by train, don’t search for Fukuoka Station—you’ll end up in Toyama! The main station in Fukuoka is called Hakata and it can be reached in five hours from Tokyo on the bullet train for around ¥21,810, without discounts.

The Tokyo to Fukuoka rail route is covered by the Japan Rail Pass but you’ll need to change at Shin-Osaka, Shin-Kobe or Okayama, as the pass doesn’t cover the direct (and fastest) Nozomi trains. But if you time the connection right you’ll only add 40 minutes to your journey.

Another option is to take a slow ferry from Tokyo to Fukuoka. You can get a one-way ticket for about ¥18,000, including a spot in a second-class cabin. See what’s available. If you’re a fan of the life aquatic, the super-good-value Japan Ferry Pass 21 offers a Tokyo-Tokushima-Kitakyushu route.

While we do our best to make sure all our information is accurate, details may vary. Post first published in February, 2018. Updated in March, 2019.

Written by: Rachel Holdsworth
Filed under: Food and Drink | Things to Do
Tags:
Sharing