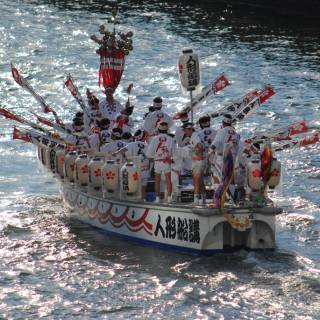 Summertime is the best time for festival culture in Japan—from parades, to period costumes, to fireworks…and even human-powered flying machines!

The Gion Matsuri is a month-long festival that takes place in Kyoto in July each year. The biggest draw are the parades (called Yamaboko Junkō) on the 17th and 24th of the month.

Join 1 million spectators as men race elaborately decorated floats (weighing in at 1 ton!) at this festival whose history goes back 750 years.

This July is host to one of the six major basho (tournaments) that take place in Japan each year. For 15 days, see the iconic Japanese battle play out in Nagoya. General seating starts at ¥2,900 for adults and tickets are sold at the arena from 7:45 am (and sometimes earlier) on the day.

The Miyakawa River will once again be illuminated by over 10,000 fireworks as the annual firework competition takes place. Pyrotechnicians from across the country will compete to create the best displays, with the festival being one the three largest in Japan.

A music festival with a laid-back atmosphere, this event runs for two days on a sandy beach in Okinawa. Headliners include Jose Gonzalez, Amp Fiddler and Naoki Serizawa, plus Terrace House star Eden Kai. Having started in Ibiza a few years ago, it has a solid reputation and more headliners are set to be announced soon.

Enjoy a quaint and colorful evening along the Nagoya Port with a display of 3,000 fireworks.

An umbrella event with lots of smaller different celebrations and festivals, this is a great time to be in the city. There’s a huge beer garden, a traditional bon odori festival and much more.

Enjoy a performance of the traditional Japanese intrument, the Koto. Playing contemporary and traditional songs, the ensemble will be lead by Michiyo Yagi with performances from Takashi Sugawa, Christopher Hardy and guest Koto player Maki Isogai. 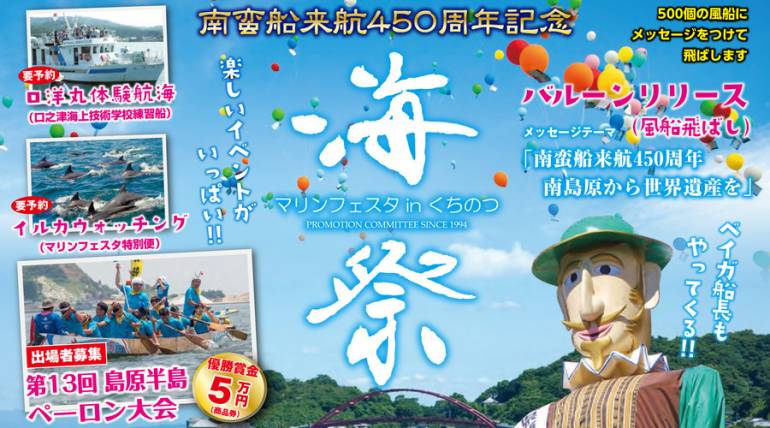 A port town which has prospered from the sea in terms of fishing and trade holds this annual Marine Festival by way of thanks. The first evening features boat parades and performances and the second day includes a dragon boat race and fireworks display.

Yamaguchi was modeled after Kyoto and this festival is a testament to their bond. The festivities are started with the traditional local Dance of the Heron, deemed a Folk Cultural Property.

This festival add its own twist (quite literally) to the traditional mikoshi parades of festivals elsewhere in Japan. As the 375 kg portable shrines are carried through the streets, the men flip them as they go. The main event is on the 23rd but there are fireworks on the 22nd.

One of Japan’s top three festivals, the Tenjin Matsuri starts off with a procession of 3,000 people dressed in the style of courtiers of the 8th to 12th centuries, after which the participants get on boats at Tenmanbashi Bridge and sail up river. As the sun sets, fires are lit on board the vessels, creating a spectacle for those on the banks. The festival ends with a fireworks display.

Set up along the Toyohira River for Hokkaido’s most popular fireworks show. Four-thousand fireworks will illuminate the Sapporo night sky.

A festival that dates back over 200 years, this event features the carrying of tall floats (the yamagasa) which are adorned with lanterns at night. It’s a really impressive sight and has been recognized as an Intangible Cultural Asset.

A three-day festival with all the perks of food stalls, performances, markets and culminating in one of the biggest fireworks displays in Kyushu!

Over 10,000 rockets are launched over the lake in this impressive display. The best viewing spot is Ho Park. Although times have not yet been released, the event should take place around 7pm. 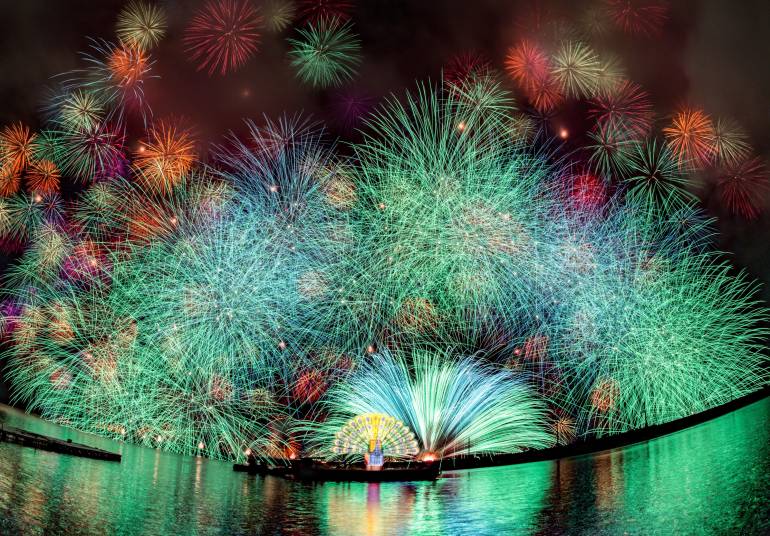 During the late afternoon, an elaborate floating lantern is set afloat in the harbor, and in the evening, a huge fireworks display is put on. Nicknamed the Saiun Kujaku (rainbow peacock), it’s a sight to behold.

Celebrating the completion of the Ise Bridge in 1934, this fireworks festival sees the launch of over 10,000 rockets in an incredible display. There are a combination of over and underwater fireworks including Niagara Falls and star mines!

One of two giant fireworks competitions held this summer, here you can see pyrotechnicians from across the country battle it out with their best designs. There are day displays from 12pm, food stalls and then the main event in the evening. 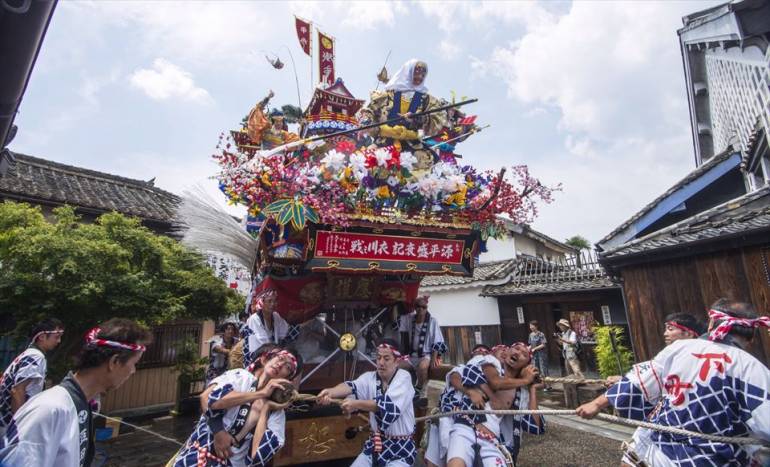 A local Gion festival which is billed as one of the top three annual festivals in Kyushu. Expect large mikoshi (portable shrines) parades through narrow streets and a great atmosphere.

This summer events has fireworks on both nights and is situated in one of the prettiest harbors in Japan too! There are 7,000 rockets on the first night and 3,000 on the second night, so keep that in mind if choosing between the two! 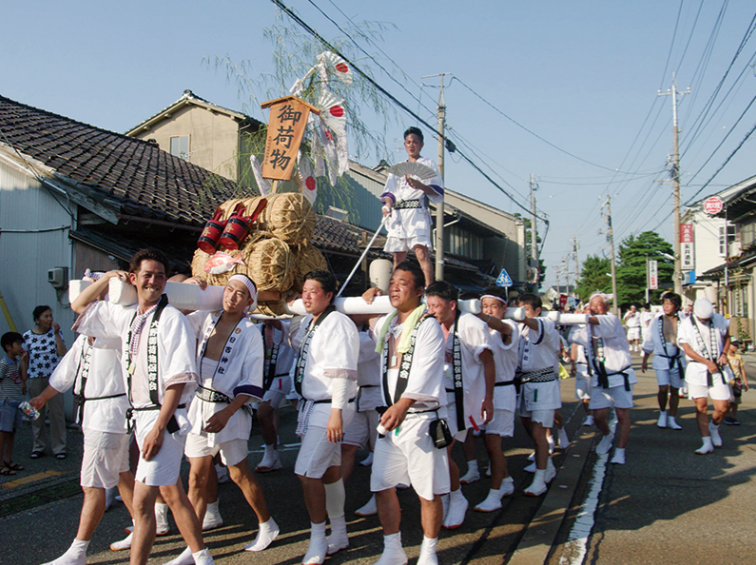 Held to welcome summer, this two-day festival features highlights like demon payment day and a lion dance, with unusual costumes and performances which have been deemed an Intangible Folk Cultural Property.

One of Japan’s more unique festivals, participants (or “bird men”) will attempt to fly as far as possible into the lake with the help of human-powered flying machines.

This annual festival ends with a huge fireworks display launched from a ship floating in the bay. You can watch from the beach and enjoy the offerings of the many food stalls and performances during the weekend.

Using the city lights as the perfect backdrop, over 3,000 fireworks will be launched in Wakayama. Originally created to pray for the port’s safety and to bring visitors to the area, the festival grows in popularity every year.

Another fantastic fireworks festival set in the bay at this popular beach in Wakayama. Running since 1948, over 3,500 fireworks will be launched including a Niagara Falls display.

The highlight of this three-day festival is the nagoshi harai shinji ritual where participants (women and children) processioning through a straw-rope ring wearing Muromachi period costumes.

One of the smaller Neputa festivals fo northern Japan, this is nonetheless a stunning display of huge lanterns. The main days ar the 30th and 2nd when the 50 floats gather together.