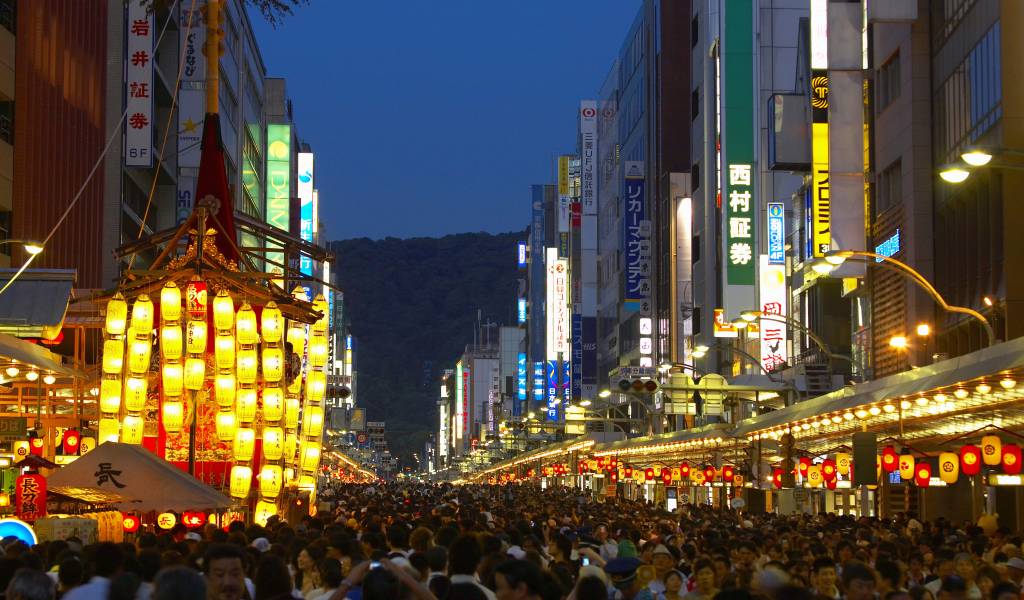 The Gion Matsuri (Gion Festival) is a month-long festival that takes place in Kyoto in July each year. The name comes from the neighborhood of Gion, which is home to some of the more traditional parts of Kyoto—including the geisha quarter.

Although there are processions throughout the month, the highlights of the festival are the parades called Yamaboko Junkō on July 17 and July 24. In the three days that lead up to each parade (known as Yoiyama Days), the central city streets are closed to vehicular traffic. Lining the streets are stalls selling a variety of traditional festival food such as takoyaki, okonomiyaki and yakitori. The floats in the Yamaboko Junko parade are huge and can weigh up to 12 metric tonnes.

What else is there to see and do

Apart from the parades and the other festivities, the festival is also known as an opportunity to snap pictures of geisha or maiko — but you’ll have to be on the look out!

Kyoto is well served by a metro line, trains and a flat-rate bus network, which makes getting around easy and affordable. There is a one-day bus pass available for ¥500. If you’re traveling from Tokyo, these are your top transport options.

Staying in Kyoto during the Gion Festival is a challenge to say the least—it’s almost as busy as cherry-blossom season. More affordable options disappear fast, but there are a few good hotels to keep an eye on. In Kawaramachi, The Millenials offers capsule-like pods. In a similar vein, the Karasuma branch of First Cabin has airline-inspired part-capsule part-room options for a few thousand yen a night. On the other side of the river, in the Gion district itself, Ryokan Hostel Gion has a more traditional hostel feel but with modern design, starting at a couple of thousand yen a night.