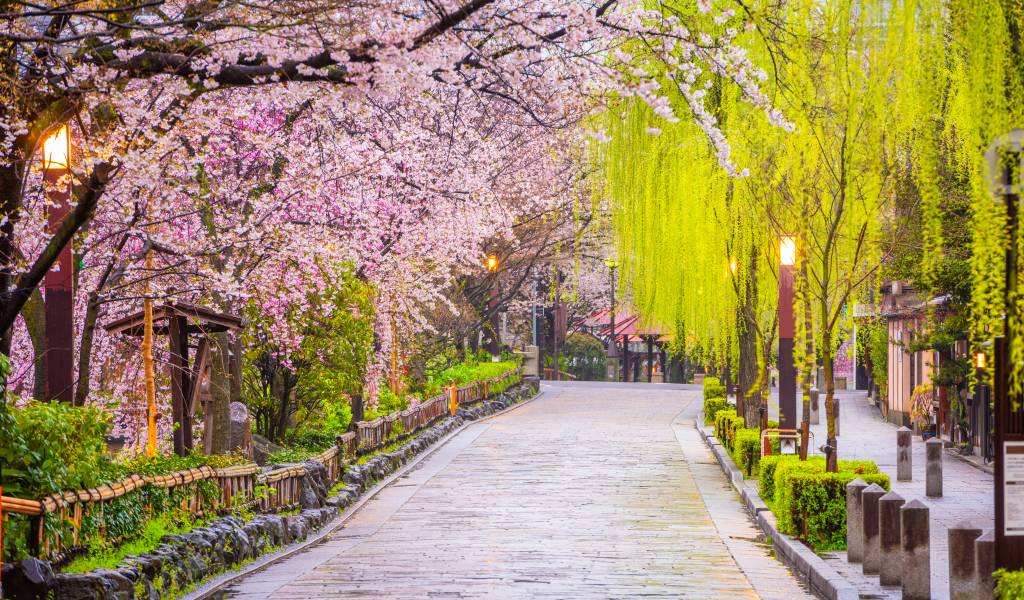 The only way to make one of the most beautiful places in Japan even more stunning? Here are all the best places to see the cherry blossom in Kyoto.

For 2023, cherry blossoms in Kyoto are expected to start around late March and be in full bloom in early April. Simply wandering the streets of Gion will be impressive enough, but to really get your sakura fix, you might want to head to one of these top spots for some intense blossom action.

We’ve divided our Kyoto cherry blossom viewing recommendations into areas so you can plan your sightseeing accordingly. If you’re in Kyoto for a couple of days and want to make the most of it, we have a two-day plan covering the west side on day one, and the east on day two.

A short train journey away, the west side of Kyoto is usually associated with bamboo and monkeys, but the river running through the area means there are plenty of stunning cherry blossoms, too!

Feeling like a different world entirely, Arashiyama is as well-known among locals for the cherry blossom as it is for the bamboo. The Katsura River is lined with blossoming trees and you can take a rowboat out to enjoy it from the water.

Most of the top spots are places you would have on your list anyway, including Tenryuji and Togetsukyo Bridge, along with small parks like Katsuragawa Ryokuchi.

With a little more space to stretch out in, the main spots in the north of Kyoto have a little more of a natural feel to them. While they may be further than you originally planned on venturing, they are likely to be a little less crowded than the central areas (but only a little).

Great for late blossoming varieties of cherry blossoms, the UNESCO World Heritage Site of Ninnaji Temple is more than picturesque when surrounded by the flowers. The temple has open grounds, which are usually free to enter but during cherry blossom season, will be ¥500. From March 19th to May 8th, the temple hosts a Flower Festival, which also includes exhibitions.

This area is easily accessed from Arashiyama as it is a short walk from the train station which connects the two. It is also on the bus route from the city to the Golden Pavilion.

A little farther north than you might have been planning to go, the Botanical Gardens are a great spot for all sorts of flora, but cherry blossoms especially. They have over 500 trees, and highlights include the weeping cherry tree forest and the somei-yoshino type, which are best for picnicking beneath. Happily, the cherry blossom illuminations will be taking place this year, from March 26th through April 10th.

It costs ¥200 to enter and you can walk from Kitayama Station.

One of the slightly lesser-known and quieter (because it’s harder to reach) spots, Haradani-en Garden is often nicknamed Kyoto’s Eden. A private garden with 24 different sakura varieties, this is a good spot if you really want to avoid the crowds. You will most likely require a taxi though, and there’s an entrance fee of approximately ¥1,500 depending on the day of the week and blossom peak, so that puts off a few people. A taxi from Kinkaku-ji is under ¥1,000. There is an M1 bus which gets you much closer, but only a few run each day.

With a great combination of both early- and late-blooming cherry blossom trees here, it’s a great option if you’re avoiding peak season. Thanks to some serious replanting efforts in the 60s and 70s, they now have over 500 trees and 50 different species to admire. The park has evening illuminations during peak season which use LED lights to create stunning yozakura displays in a grand setting. Illumination hours are from 6pm to 9pm.
Entry is ¥1,030 during daytime hours and ¥1,400 (Mon–Thu) or ¥1,800 (Fri–Sun) during illumination hours.

Kyoto Gyoen surrounds the Imperial Palace and the Sento Imperial Palace with over 1,000 cherry trees to wander through, all free of charge. They have both early- and late-blooming trees and a real variety of mature examples to enjoy, including weeping trees famed from legends. According to ancient tales, the trees were so beautiful, a passing emperor ordered his carriage to turn and go past them again. Now nicknamed the Goshomi Kurumagaeshi (turn of the royal carriage) variety, you might have to do the same thing when you go by this spring.

A wonderful spot to stroll down, the Kamo River runs through the liveliest part of Kyoto, but also extends to a calmer path which will no doubt be filled with cute couples and those ubiquitous blue tarps. This area is especially nice towards the end of the season as petals begin to fall and float along the river.

East: Gion, Higashiyama, and beyond

Arguably the prettiest part of Kyoto in general, if you add some cherry blossom to the winding streets of Higashiyama, you will honestly never want to leave.

A 2km stretch from Ginkakuji to Nanzenji, this is a fantastic way to start off a (rather long) day of walking in Higashiyama during Kyoto cherry blossom season. It was once the walking route of famous Japanese philosopher Nishida Kitaro; he would meditate on the Meiji-era canal path as he made his way to Kyoto University each day. You can stroll off to seek out nearby temples and shrines or visit the cafes on the route as you enjoy the views. See our full guide.

Pro tip: The Philosopher’s Path is one of the most popular spots, so early morning is your best bet for a peaceful walk.

Possibly the number one spot in the city, Maruyama Park is hanami central and is definitely more lively than peaceful. In past years, it’s a fantastic place to visit during the evening, as the grounds of Yasaka Shrine are typically filled with revelers, food stalls, and festivities beneath lantern-lit sakura. However, it has not been announced if there will be illuminations in 2022 (they were canceled last year). Be sure to visit the Gion Shidare-Sakura, a weeping cherry tree grown from the seed of its 200-year-old predecessor.

Prepare yourself for crowds, but brave them because the views are worth it. Already a contender for top spot on a regular day, Kiyomizudera really comes into its own when filled with cherry blossoms. From the balcony, you can look out across to the city with blossoms beneath you.

The nearby pond has a lot of trees too, but you may find yourself queueing to get anywhere. There are evening illuminations from March 26th to April 3rd from 6pm to 9pm.

Following the course of the Shirakawa Canal, Shimbashi is considered one of the prettiest streets in Gion and is incredibly popular with cherry blossoms strewn across the flagstones. The most popular section is between Nawate-dori and Kawabata-dori, but you can’t really go wrong whichever end you find yourself in. During the evening, the blossoms are illuminated and you can peer into the (expensive!) bars and restaurants that line the river.

Home to one of the biggest torii gates in Japan, Heian Jingu Shrine is a very popular spot thanks to evening illuminations and stunning reflections of weeping cherry trees in its pond. This variety blossoms slightly later than most, so it’s great if you’ve caught the end of the season. The shrine grounds are free to enter, but you do have to pay ¥600 to enter the garden which holds the cherry trees; this is just behind the main buildings. Note: It has not been announced if there will be illuminations in 2022.

Running past Heian Jingu Shrine from south to east, Okazaki Canal is a very, very popular spot and even has boat rides beneath the blossoms. The canal connects the Lake Biwa canal network with the Kamo River and is always filled with keen photographers and selfie-snappers. You can stroll along the paths and watch boats go by; they’re actually not extortionate, costing around ¥1,500 per person — so you can try them if you want a treat.

Once used to transport boats between canals, the Keage Incline is a beautiful spot, with old train tracks adding an unusual twist. A relatively steep incline, it was in use between 1891 and 1950 but was restored in 1977 as a site of industrial heritage — becoming a National Historical Site in 1996.

Not as many sightseeing spots are located below the main station of Kyoto, but that means you might be able to avoid some of the biggest crowds!

General Hideyoshi once held a famous hanami party in the grounds of Daigoji Temple and it’s been a popular spot ever since. The blossom-filled landscape garden dates back to 1598 and was expanded for the famous hanami event, making it an excellent space to enjoy a variety of Kyoto cherry blossoms. The entrance fee is higher than most places which means it may be a little quieter, and the temple is worth exploring too, with parts dating back to 1115.

Headed to Tokyo? Check out our cherry blossom mega guide. If you’re visiting Osaka, we have one for the foodie city too.

While we do our best to ensure it’s correct, information is subject to change. This article was first published in March 2018. Last updated in March 2022.

Kyoto
Written by: Lily Crossley-Baxter
Filed under: Things to Do
Tags:
Sharing