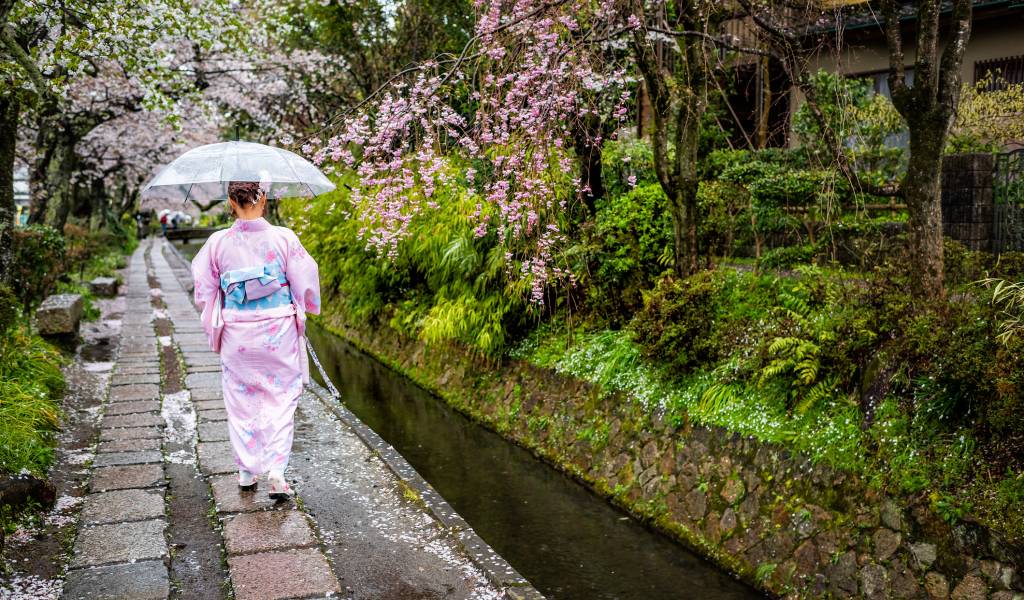 The Philosopher’s Path in Kyoto is more than a quiet meander along a canal. It’s also a chance to unwind and explore a different side of Kyoto.

Called Tetsugaku no michi in Japanese, people often flock to there to view the cherry trees in spring or colorful leaves in fall. It’s great way to see some temples and shrines — with mini-detours to well-known and lesser-visited options aplenty. We recommend beginning at the north end, near Ginkaku-ji.

What is the Philosopher’s Path?

The Philosopher’s Path is a fairly flat, 2 km long path stretching along a canal in Kyoto’s Higashiyama District. Despite it being so short, walking the Philosopher’s Path can fill many hours because of all those detours you’ll want to take. The path gained its name thanks to the influential Kyoto philosopher, Kitarō Nishida, who walked along it on his way to university.

Nishida founded the Kyoto School of Philosophy, and his daily walk was a key point in his meditation. Born in the Meiji Period (1868-1912), he was able to frame the world using Eastern and Western views. He was a keen exponent of the logic of basho — the closest translation being ‘place’ in English, but which is a less concrete concept than one might expect.

While nowadays the crowds and cafés might be a bit of a distraction, the Philosopher’s Path is still a place for meditation. The countless shrines, temples, and smaller spiritual sites offer focused points for thought. Along the path itself, take your time to appreciate the sounds of water and birdsong. And of course, the relaxing sight of flowing water and the signs of seasonal change around you too.

Experiencing the seasons along the Philosopher’s Path

The Philosopher’s Path is a great place to visit all year round, as the scenery offers something unique for every season. While spring gets crowded, the colder months also have their highlights. Afterall, what could be better than a brisk walk in the (nearby) mountain air on a winter’s day?

Unsurprisingly, spring is by far the most popular time to visit, especially when the delicate sakura (cherry blossoms) bloom. Prepare to see traditional hanami (cherry blossom viewing) parties with locals and visitors alike. This means that the cafés and food stalls are in their element during this time, and you’ll be spoiled for choice (but also battling for a seat).

During summer, a magical event takes place along the water, with fireflies appearing as dusk falls. As the hot days begin to cool, these glowing beauties transform the Philosopher’s Path into an anime-esque scene. Bring something to sit on and keep your eyes peeled — whether you’ve seen them before or not, the fireflies are pretty amazing.

An added bonus of cherry trees is that in the fall, their leaves become a fantastic color palette of golden browns. Compared to spring, the fall leaves are a slightly more somber affair though. Offering a chance for reflection, the leaves invite a more zen appreciation, often lost in the merriment of spring. In winter, soft snow sometimes coats the ground, offering a magical winter scene you’ll struggle to beat.

The path has a whole host of tempting detours which will distract you on your stroll, including plenty of spiritual spots. Look out for the following.

Starting off with a pretty famous one, Ginkaku-ji, known as the Silver Pavilion, is the lesser-visited sister of the world-renowned Golden Pavilion, Kinkaku-ji. Highlights include the moss garden and the Sea of Silver Sand complete with sand cone, known as the moon-viewing platform. 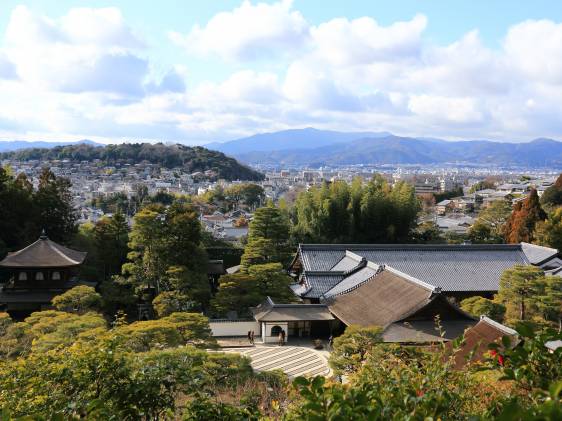 This understated but atmospheric place is a great detour. The moss-covered gate sits above worn steps and invites you to walk between sand mounds to achieve purification. Once inside (and purified), make sure to see the stone bridge, the mini-art show in the storehouse, and the secret area behind the main hall. 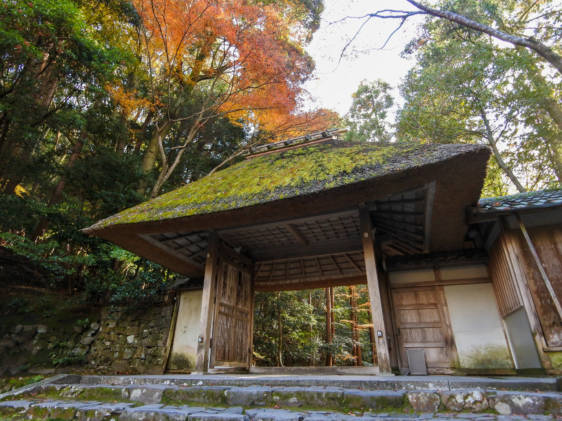 Known for its fall colors, Eikan-dō was founded by one of the monk Kukai’s students. Make sure to check out the small rock garden, the Tahoto Pagoda and the very pretty Hojo Pond. If you’re around in fall, then be sure to head over for their evening illuminations — although expect crowds, it’s very popular! 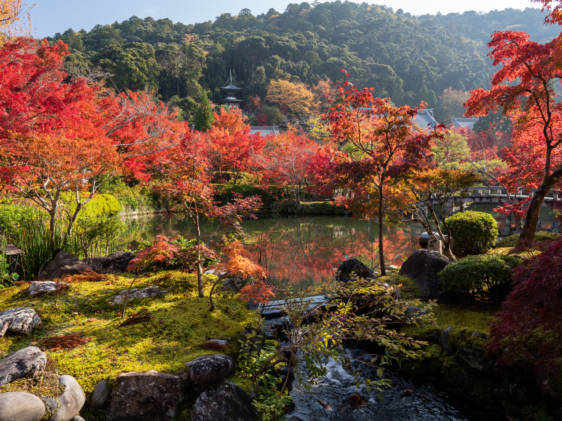 A small shrine with a totally-worthwhile reason to visit: the mice guarding the entrance. Forget foxes, this place does things its own way — and it’s far cuter than you might expect.

The shrine is dedicated to Okuninushi, a god who had a great relationship with mice after they saved him from a fiery death at the hands of his beloved’s father. The mice offer good luck for childbirth and learning, and it’s a particularly popular spot for those born in the year of the rat. 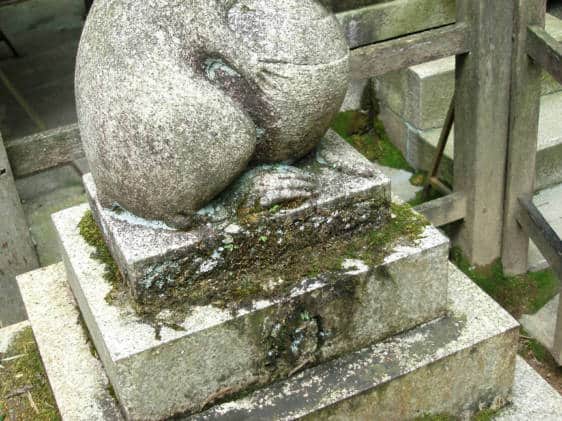 One of the most important Zen temples in all of Japan, Nanzenji dates back to the 13th century. It has an especially impressive Sanmon — the large wooden entrance gate — which was constructed in 1628. You can still climb onto the gate’s balcony for views across the city — and all this before you’re even in the temple grounds.

Inside, you’ll find rock gardens, beautiful paintings and a little further, a surprising addition. A giant brick aquaduct stands just outside the Hojo (the former head priest’s residence) — built in the Meiji period, it once carried goods from Lake Biwa to Kyoto. 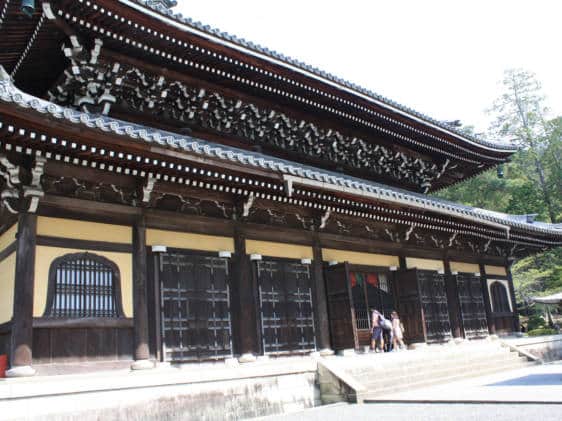 Canal-side cafés and restaurants near the Philosopher’s Path

As the popularity of the path grows, there are more and more cafés and shops popping up, so factor in some time for a coffee break. Since the canal was built to revitalize the area’s economy back in the Meiji period, it’s kind of bringing the project full circle with local businesses thriving alongside the water.

We recommend Komichi, a little cafe serving shaved ice and tea — perfect in the warmer months. Kanoshojuan Teahouse is another great option, it’s a traditional spot serving matcha, seasonal desserts and other sweets. And if you’re around in the evening, Monk is a smart restaurant that serves 7-course dinners for ¥13,200. Relying on fresh, seasonal produce, the menu changes frequently and is a great way to treat yourself after a day’s exploring. They have two serving times: 5 p.m. and 8 p.m. — we recommend you reserve in advance (you can do so online in English).

Getting to the Philosopher’s Path

From Kyoto Station catch Bus 5 or 17 to the stop called ‘Ginkakuji-michi. This stop is just a short walk from Ginkaku-ji near the northern end of the Philosopher’s Path. Alternatively, you could catch Bus 32 to ‘Miyanoomaechō’ and start from the south. However, Bus 32 doesn’t stop at Kyoto Station, so consult the route map to work out the most convenient option for you. Whatever bus you take, they’ll have a flat fare of ¥230.

If you’d prefer to take a train or the subway, the closest stop to Ginkaku-ji is Demachiyanagi Station which services the Keihan Main Line and the Eizan Main Line. From there, it’s about a 30 minute walk or 20 minute bus ride to Ginkaku-ji. Another option is to take the Tozai subway to Keage Station and walk about 10 minutes to Nanzen-ji.

At various locations along the Philosopher’s Path rickshaws offer their services — this is an old-fashioned form of transport using the impressive leg-power of men pulling the carts. If you haven’t tried one it can be pretty fun — it’s a popular date activity, but is nice with friends too. It costs around ¥8,000 for half an hour but you can try it for 10 minutes for around ¥3,000 (prices vary).

While we do our best to ensure it’s correct, information is subject to change. Post first published in January 2016. Last updated in February 2023 by Maria Danuco.