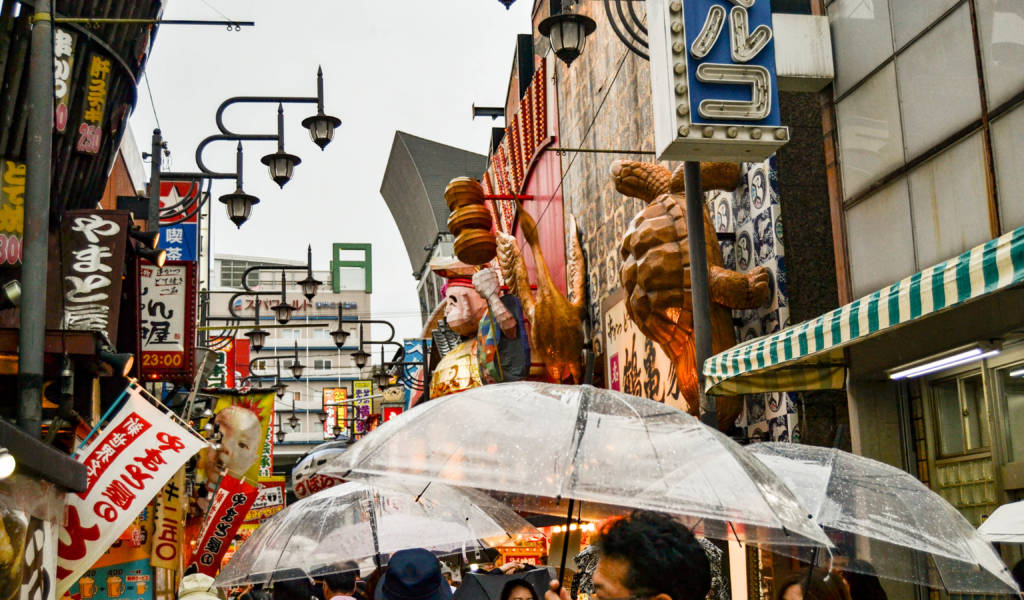 9 Ideas for Rainy Days in Osaka

Nothing makes the neon streets more photogenic than some raindrops, but once you’ve got your atmospheric shots, what else can you do on a rainy day in Osaka?

Unfortunately, plenty of the main sights in Osaka—Dotonbori, Tennoji Temple, Sumiyoshi Taisha, for example—require some outdoor strolling, which can be pretty unenjoyable in the miserable rain. You might not have factored in the wet weather, but in a city that sees around 110 days of rain a year, you probably should have. Fortunately, Osaka did, so you’re not short of things to do—from huge covered shopping streets to relaxing spas to great museums and galleries. Take a look at our top ten suggestions and you might find yourself hoping for a bit of rain.

1. Explore the past at the Osaka Museum of History and Living

A glimpse of Osaka in times gone by, the museum has carefully recreated the city streets for a unique display.

With a full-sized historical townscape, the Museum of History and Living allows you to see what day-to-day life was like in Edo-era Osaka (rather than just battles and wars like many museums). Traditional festivals, games and shops are explored using murals, videos, and small- and large-scale models. Guests can rent a kimono and stroll through the streets for some vintage shots as well as enjoying the special exhibitions and events including crafts and tea ceremony.

2. Shop in the city’s shotengai

Safe from the elements, these shopping arcades maintain a strange half-in-half-out feel thanks to the glass ceilings (literal ones), allowing natural light to flow in. While some are more modern, like the Shinsaibashi-Suji (just off Dotonbori) some are a little more retro like the Karahori and Kohama shotengai.

Alternatively, head to Tenjinbashi-suji, which claims to be the longest in Japan, stretching out to 2.6 km. It’s less crowded than Shinsaibashi as it’s a little further afield, but has enough stores and shops to keep you busy for a long while. If it’s kitchen goods your after, stick to Doguyasuji—the short-but-sweet shotengai filled with knives, utensils and more.

3. Catch a show at the National Bunraku Theater

If you’re feeling cultural, then a show at the National Bunraku Theater will be right up your alley.

Offering performances of bunraku—a traditional art form from the Kamigata (Osaka and Kyoto) area, the theater opened in 1984 and has a smaller branch in Tokyo. A type of puppet drama, bunraku is on UNESCO’s list of Intangible Cultural Heritage of Humanity. Tickets can be bought online or at the box office—if you’re looking for student discounts you’ll have to get the tickets in person.

4. Feed the fish at Kaiyukan Aquarium

Embrace the water and spend a couple of hours at one of the largest public aquariums in the world.

Known for having a whale shark, the aquarium is one of the big draws for locals and visitors alike. The areas include a ‘Deep Japan’ display with giant spider crabs as well as a ‘Japan Forest’ which has salamanders slinking around. There are different feeding times and a touching tank for kids, so you can entertain families easily, as well as adults.

5. Eat away the day at Tsuruhashi Market

Similar to the city’s shotengai, Tsuruhashi is a food-focused market with countless stalls to sample from.

Located in the Osaka’s Koreatown, this market will keep you well fed and stocked for days. The atmosphere is distinctly shabby but in a charming way (hopefully), with plenty of signs, lights and distractions to keep you entertained. There are around 800 shops in the market which stretches through three areas (Tennoji, Higashinari and Ikuno). This is where the chefs and restaurant owners of Osaka gather in the mornings to get the best produce for the day, so trust in the knowledge that you’ll be getting good quality when you shop here. Be sure to arrive hungry as the food stalls sell everything Japanese and Korean—you’ll have a hard time choosing from them all!

6. Soak away the day at Spa World

Probably the best way to enjoy a rainy day in the world, this is basically an onsen theme park with a rooftop pool.

In the delightfully sketchy Shinsekai area of Osaka, Spa World is divided into two sections: Asian and European, with genders swapping between the two each month. Spend your time between blue caves, Grecian pools and salt saunas, with traditional Japanese cypress baths around too. The water is sourced from a proper hot spring, it’s just jazzed up a bit by the surroundings—so enjoy the benefits on your skin and embrace the bizareness of it.

The pool at the top is mixed and requires bathing suits. Be aware there is a strict no tattoo policy (but if you can hide them you’ll probably be fine—from personal experience once you’re in, you’re alright).

Use for three hours is ¥2,400 while all-day use is a little extra at ¥2,700. You have to pay an extra fee on weekends and national holidays.

See the world’s only permanent exhibition of this very local style of wood block prints.

For a local feel, head to the Kamigata Ukiyoe Museum which has displays of prints featuring popular kabuki and bunraku characters. From the late Edo era, the prints form the only permanent exhibition in the world of Kamigata Ukiyoe. Kamigata is the old name of the Kyoto-Osaka region and the prints are distinctly different to those from elsewhere in Japan thanks to their realistic style.

If you want something a little more varied, head over to the National Museum of Art on Nakanoshima Island (don’t worry, it’s right in the middle of the city).

Maybe so obvious it passed you by, but Osaka Castle was renovated to include a historical museum, perfect for rainy days!

While wandering in the surrounding park won’t be too much fun, you can step inside for a few hundred yen and learn all about the history of the castle and the city it protected. Once the largest castle in Japan (and still pretty impressive) the castle has undergone various disasters including lightning strikes since its original construction in 1583. The modern version was built in 1931 and renovated in 1997 and will teach you everything you need to know about the battles, bloodshed and building work that’s taken place over the centuries.

10. Make your own Cup Noodle at the ramen Museum

If a museum doesn’t have it’s own cup noodle making room is it even a museum? Not in Japan, and the proof is right here at the Momofuku Ando Instant Ramen Museum.

With a much more well known sister museum in Yokohama, this museum is slighty smaller but still really fun—with the added bonus of being the real hometown of the creation. With wall-to-wall displays tracking the design changes, movies about the history of cup noodle development and giant models dotted around the place, you’ll love it here, even if you only like instant ramen a bit.

The place is a lot of fun before you even reach the cup noodle making area, which is factory-like in efficiency (as we would expect no less from Japan). Design your cup, the contents and then take it throught the packaging process, all before packing it in an inflatable pouch. If you’re still peckish, there’s an Ippudo ramen shop on the way back to Ikeda Station.

Osaka
Written by: Lily Crossley-Baxter
Filed under: Things to Do
Tags:
Sharing