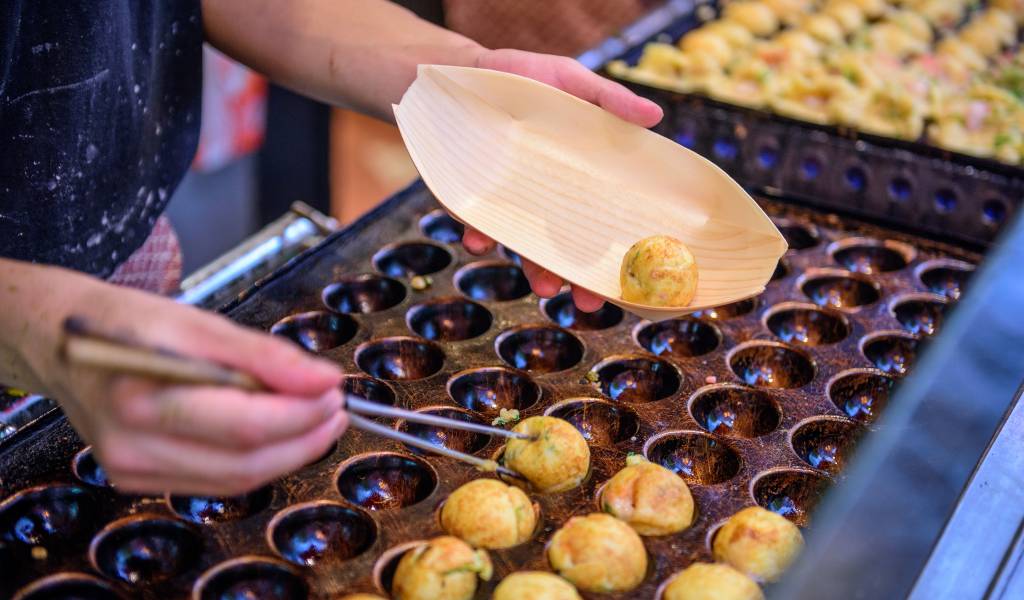 The Gourmet Guide to Osaka: 10 Foods to Try

Osaka is well known for its neon lights and nightlife but it also has enough delicious delicacies to well and truly earn its nickname as “Japan’s Kitchen”.

Whether you’re making a quick stopover on your way to Kyoto or spending a while in this friendly city, one of the top things to do on your list should be eating. Now, that’s pretty much top of my list wherever I go, but I promise that in Osaka it is a worthy goal. While it may not be as big as Tokyo or as refined as Kyoto, this city has a gourmet reputation all of its own. Here, you can feast on the food enjoyed by locals: Takoyaki, okonomiyaki and kushikatsu are some of the more well-known dishes. There’s also traditional pressed sushi, ridiculously wobbly cheesecake and kitsune udon to try—which all originated in Osaka. Read on for the perfect Osaka food guide for your trip (and if you haven’t booked one yet, you’ll be tempted after reading this!)

Pro tip: Enlist a local guide to show you the tastiest eateries in town.

So, it’s best to get at least one of the most popular options out of the way first, and who doesn’t love okonomiyaki? Meaning ‘what you like’ and ‘grilled’, you can mix and match your favorite toppings, cabbage and some extras into batter before being cooked on a griddle, and served up still sizzling. Some places let you cook your own, which is great fun. At others, you are seated along a griddle to watch as it is prepared for you. This is real comfort food and a crowd pleaser as it is so adaptable to individual tastes. (There are also a few okonomiyaki variations, like the Tokyo style, also known as monjayaki, and Hiroshima style.) You’ll find plenty of spots offering this delicacy on any stroll through Osaka, or you can try the ones below.

Where to try okonomiyaki in Osaka

These sweet cakes are made fresh and cooked individually in special copper molds. While they are usually filled with red bean paste, these days you can have them with custard and sometimes chocolate too, as well as special seasonal varieties like strawberry. They can be found in varying forms across Japan, all with different names (including imagawa-yaki, oban-yaki or niju-yaki), but here they are known as taiko-manju, with taiko meaning drum. These treats can be found in most food markets, like the Kuromon Ichiba market a few streets away from Dotonbori. If you’re looking for them specifically, head to Gozasouro, this is the most famous spots and have plenty of stores to choose from.

Where to try taiko-manju in Osaka:

Deep fried and subsequently delicious, kushikatsu (aka kushiage) is a delicacy specific to the Shinsekai area of Osaka, although you can find it pretty much everywhere. This is a real mix-and-match style treat; you pick all the skewers individually from long lists, or opt for a pre-picked set to get a general taste for it. From beef tongue to gizzard, quail egg to bamboo shoot, there’s always a great selection—and it’s a great opportunity to try out some new flavors. Served fresh from the fryer with a sweet tonkatsu dipping sauce and sweet cabbage, you can order in batches until you can eat no more. There is one golden rule for kushikatsu though, and that is to NEVER double dip your skewer. Read on here for more about the angry faces and best places to try kushikatsu.

Where to try kushikatsu in Osaka (more options available in the above-mentioned article):

Invented in the Meiji era, this simple and pleasing dish was actually created in Osaka, although it is on every udon shop’s menu across Japan. Surprisingly, you can try it in the very restaurant it was invented in, by chef Yotaro who founded his own restaurant after the one he worked at stopped selling udon. A simple dish of udon (thick wheat flour noodles) topped with deep-fried tofu, kitsune (fox) udon is named after a legend that suggested foxes loved snacking on dish. This is also why there are often two pieces of tofu served—they represent the two foxes often seen guarding shrines. This is a great chance to see the difference in Kansai and Kanto dishes. In Kansai, broths and sauces are milder whereas the same dishes in Kanto have a stronger flavor.

Where to try kitsune udon in Osaka:

Another big favorite, takoyaki is the love-it-or-hate-it option for the city, but one that you just have to try. A popular festival food across the country, the little balls of batter and octopus are cooked to perfection at street stalls by bandanna-clad chefs who flick the batter in a mesmerizing performance. Made with small pieces of octopus cooked in batter, they are topped with takoyaki sauce (a Worchestershire-esque sauce, but thicker), mayonnaise, bonito flakes and aonori (powdered seaweed) for a real mouthful of flavors. The takoyaki cooked in Osaka are often left a little softer than elsewhere in the country, so you’ll be trying them in their most authentic form! (If texture is an issue, give them a second chance somewhere else!)

Where to try takoyaki in Osaka

A traditional take on sushi, this local delicacy is a little harder to find that the other foods mentioned here. Made using rice and fish pressed in a cypress box, the sushi takes on a symmetrical and pleasing finish, unlike any sushi you’ll have seen on your travels. Focusing on the quality and flavor of Japanese rice, the dish is a testament to the benefits of simplicity and is also known as oshizushi. Yoshino is one of the best spots to try it as they have been in business since 1841, and certainly know what they’re doing. A great alternative is to pick up a lunch box at their main shop or one of the department stores (you can find mini-Yoshino stalls at Takashimaya Osaka, Hanshin Department Store and in Shin-Osaka Station) for your next train journey.

Where to try hakozushi in Osaka:

Not for the squeamish, horumon is like yakiniku (Japanese-style grilled meat), but with all the bits you usually don’t eat. The name is a Kansai-dialect play on “hormone” and means “discarded pieces”—so it’s no secret what’s going in there. It’s actually seen as a bonus thanks to the high levels of collagen (great for your skin) and stamina-inducing qualities, so maybe give it a chance. Top picks include cow stomach, spleen, liver, kidney and heart or pig uterus, esophagus and diaphragm—hungry yet? The pieces can be served as yakiniku, fried like tempura, in a hot pot or mixed in with noodles. While most yakiniku spots and izakaya will have various horumon items on the menu, there are some places that specialize in the delicacies, so if you’re keen to try them at their best, head to one of the spots below.

Where to try horumon in Osaka

Beef tendons cooked to perfection in a mirin- and miso-based broth, this is a real hearty side dish you’ll find at most izakaya and yakiniku restaurants and sometimes at festival stalls. Served simple, it will sometimes be scattered with scallions, but generally is left alone in all its rich meaty goodness. You can have it in quite a few ways, either skewered, grilled on a hot plate or in stew form—but all have the same rich and strong flavor. Technically this is a form of horumon (see above), but is so popular it needs its own category—plus it is a good gateway meal to the world of how delicious horumon can be. Nonkiya is a Japanese standing bar which specializes in doteyaki, but has little to no English.

Where to try doteyaki in Osaka:

Sometimes the best food in Japan isn’t Japanese, and the stalls and cafes of Tsuruhashi prove exactly that. This is one of the most famous Koreatowns in Japan, filled with authentic places to fill up when you need some spice in your life. At the market, you’ll find all the best fresh produce, from kimchi (try the samples to find your perfect match) to meat and plenty of places serving up very affordable food too. If you’re a street food fan, be sure to try the freshly made pancakes and the kimchi sandwiches on offer! For a bigger meal, take your pick from the small restaurants lining the streets, and choose from Korean barbecues, bibimbap or noodles. Beware, as Wednesday is the regular closing day for the market.

Where to try Korean food in Osaka

A shop with lines out the door every day, this incredibly fluffy cheesecake is loved for its creamy and light texture. Sold fresh from the oven, the cakes wobble to the touch and are a little more sponge-like than the cheesecake you might be thinking of, but delicious nonetheless. There are plenty of shops in Osaka where they bake them fresh, but only some have cafes where you can sit and eat them. There are often two lines: freshly baked and baked two hours ago, it is suggested that if you want to transport them, the second line is better as they are a little firmer. Listen out for the bell which is rung when fresh cheesecakes come out of the oven!

Not likely to make it onto the fancy gourmet lists, but an Osaka staple nonetheless, cup ramen was invented by risky businessman Momofuku Ando in Ikea, Osaka. This museum is not like most museums you may have visited. It has a movie theater, bright displays, and a life-size model of his invention shed. You can also make noodles from scratch or create your very own cup noodle. This is a great way to spend a rainy afternoon in Osaka, and you can take home dinner if you try one of the make-your-own options. Unfortunately, unlike the museum in Yokohama, you cannot eat here (they have a noodle bazaar) but they do have vending machines serving noodles from across Japan, with hot water and chopsticks available.

Where to try cup ramen in Osaka

While it may not be Michelin-star ramen, a bowl of this late-night salty goodness is heaven-sent on a night out in the city. It’s also a great chance to meet the locals. In the warmer months, ramen stalls have open counters and you eat then and there, slurping all the way till the end. In the winter you’ll be protected with plastic sheets hung down, but usually by this point, you aren’t so bothered. You can often find them unintentionally while stumbling, but there’s one well-known spot you can always head for.

Where to try standing ramen in Osaka

Kinryu Ramen: Dotonbori; easy to spot, look for the dragon(!); prices start from ¥600 for basic ramen