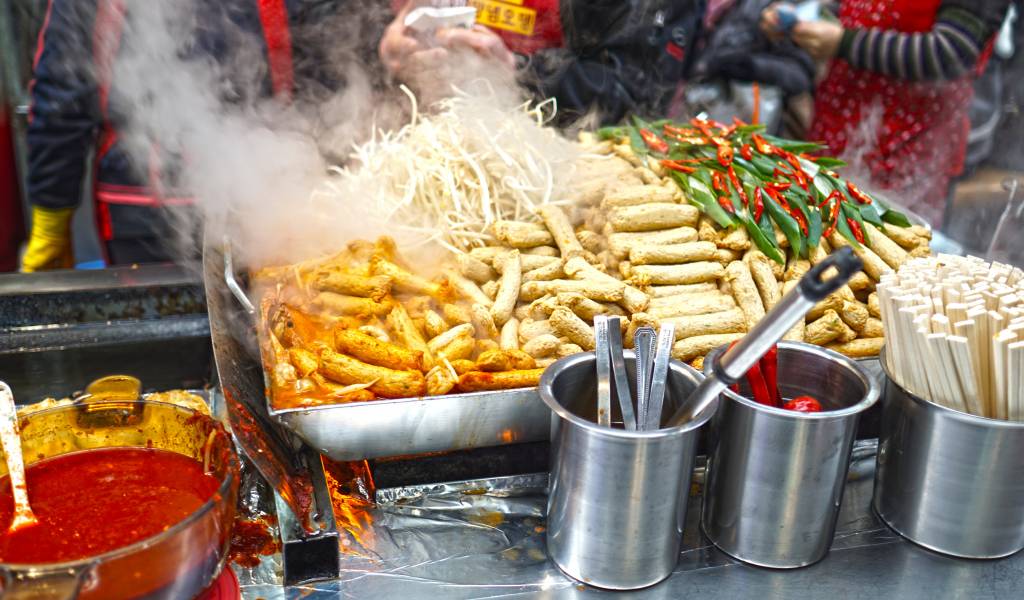 Not so long ago we took you on a foodie’s tour of Japan’s three major Chinatowns—and after all that delicious food it is time for a new cross-cultural experience right here in Japan. We are heading for the home (away from home) of kimchi, K-pop and cheapo-friendly cosmetics: Koreatown!

Tsuruhashi in Osaka, where it all began

First stop is Osaka’s Tsuruhashi, where mouthwatering scents welcome you the moment you step out of the station. Much like Namdaemun in Seoul, the area around Tsuruhashi is truly vibrant. The maze of stalls where anything from fresh homemade kimchi to K-pop CDs and collectibles seems to come in an endless supply.

Korean BBQ, or yakiniku establishments are everywhere in Tsuruhashi offering a wide variety of meats at various prices. Some of which are overwhelmingly cheap so you are assured to find a great place for dinner.

For those of you who need a cup of coffee to get started, why not walk into the Rock Villa? Aside from serving a good cup of joe, it also serves a very original kimchi sandwich for ¥500. The toasted sandwich filled with slices of cucumbers, scrambled eggs and ham topped off with kimchi pickles is both refreshing and spicy at the same time.

But guess what? This is actually not the ‘real’ Koreatown. Osaka’s Koreatown is just a few minutes’ walk away or simply hop on city bus 18 to Gokodori bus sop. The narrow shopping street named Miyuki-dori has almost 200 restaurants and shops for anyone who wants to bring a slice of Korea back home. Although a bit too expensive to buy, but certainly worth admiring are the the traditional Korean dresses, called hanbok, which some stores rent out for weddings.

Please be aware that while the shops and restaurants are open during regular business hours, they are closed on Wednesdays.

Shin-Okubo, a little taste of Seoul in Tokyo

For many Shin-Okubo on the Yamanote Line is just a random station after Shinjuku, but for Tokyo’s die-hard K-pop fans it is their “Akihabara”. Shin-Okubo is a fairly young neighborhood that emerged around the 1980s when many Korean students but also expats started coming to Tokyo.

K-pop became a big hit in Japan around the early 2000s and remains so until today. Shin-Okubo’s dozens of small stores leave no place on their wall uncovered with posters of your favorite idols and welcome you with their most popular songs. There are also plenty of karaoke bars for those budding talents among you!

A street snack you will come across at almost every food-related stall in Shin-Okubo as well as Osaka’s Tsuruhashi is kimbap. Kimbap is very similar to a piece of hosomaki sushi as it too is rice filled with one or two ingredients wrapped in seaweed, albeit quite a bit larger. The local favorite seems to be kimbap filled with kimchi, and we doubt anything can be more Korean than that for just a couple of hundred yen.

Ladies, and gentlemen, I have kept you waiting for this one a bit too long but here we go. Korean cosmetics, they are … everywhere! Whether it is Etude House, Skinfood or Missha you will find your favorite brand in Shin-Okubo. Certainly, they ask a bit more than you could get them for in Korea, but they are still a steal. Face masks that go for as little as ¥60 a piece seems to be the one product no one is able to leave without. Be quick though, one of our cheapo-staffers might just snatch that last pack on sale!

Offering cheap yet top-quality cosmetics, delicious food and a vibrant atmosphere Japan’s Koreatowns are not just a slice of Korea but also cheapo heaven!

Written by: Bjorn
Filed under: Food and Drink | Things to Do
Tags:
Sharing