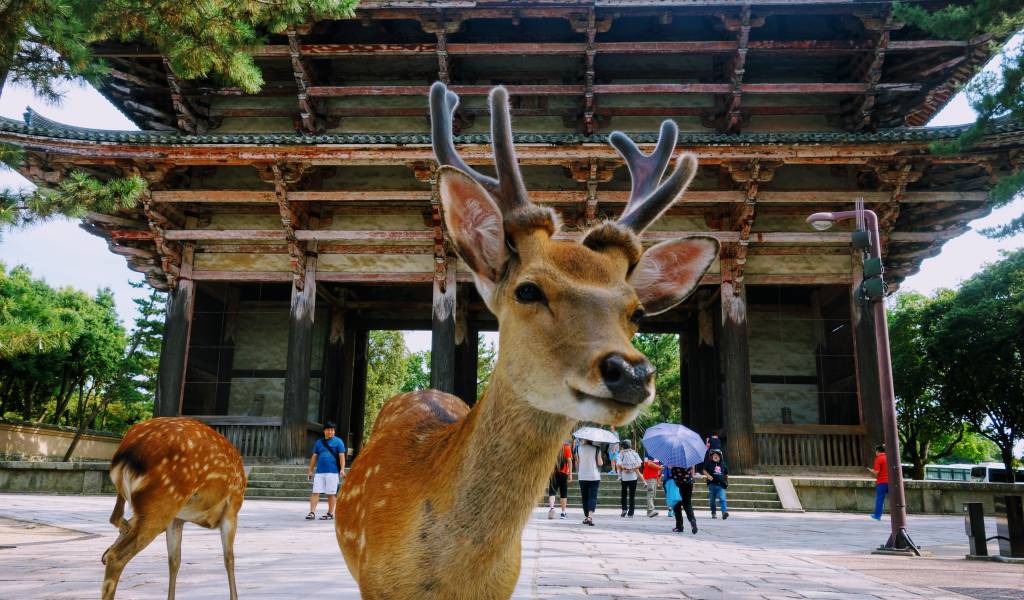 Nara, a place where deer roam freely, is found in the Kansai region of Japan and can be reached from Kyoto and Osaka in less than an hour. The area attracts many animal lovers and tourists interested in Nara’s numerous temples.

The best way to travel to Nara internationally is by plane to Osaka, and then train to Nara Station. Itami Airport in Osaka operates domestic flights, and Kansai International Airport has planes from 75 different cities all over the world coming in. The cheapest domestic airline tickets are usually found for airlines such as Peach or Jetstar, and prices start at 10,000 yen for a round trip.

There are various ways of traveling from Osaka to Nara, with one being from Kintetsu Namba taking the kaisoku-kyuko, which is a Rapid Service express that gets you to Kintetsu Nara in 32 minutes. Also, from JR Osaka you can take the Nonstop Kaisoku (Rapid Service) to JR Nara in 48 minutes.

The bullet train from Tokyo will get you to Kyoto in about two and a half hours. From Kyoto Station, the JR Nara Line or the Kintetsu Kyoto Line will have you in Nara in another 70 minutes, with approximately 10 minutes required for train transfers. You can book Shinkansen tickets in advance online.

Buses are also a popular alternative; they cost less, but take 7 to 8 hours from Tokyo. There is a wide range of buses of different costs, such as the overnight Yamato bus that costs 8,400 yen and the cheaper one-way overnight buses that start from 3,500 yen per trip. Also, bus fares are typically more expensive on weekends and holidays.

Although strolling with the deer is no doubt one of the best ways to get around, Nara’s main attraction is not only the Nara Park area, but all spread out with numerous religious temples and monuments that must be toured. Some places such as the Enjoji Temple and the Yagyu area are inaccessible by train, so buses or taxis come in handy as an alternative. There are 5 buses that leave JR Nara Station, and travel all the way up to Yagyu and back, while stopping at different temples along the way. The Nara Kotsu Bus Service costs 180 yen for an adult, and 90 yen for children of ages 12 and under. If you would prefer to travel on foot, a whole day’s worth of sightseeing is available in the Nara Park area starting at the station, and walking to various monuments including temples, museums, ponds and gardens with at least 5 hours of walking while observing culture.

Where to go and What to do

In 710, the permanent capital of Japan was decided to be Nara, but was later changed due to its strong Buddhist influence and power. As a result, in Nara rests the world’s largest bronze statue of the Buddha Vairocana, or Daibutsu (in Japanese), which is also one of the 7 “Historical Monuments of Ancient Nara” UNESCO World Heritage Sites. The temple in which the Buddha statue sits is called the Todai-ji, and is dated to 728. The temple is surrounded by gardens such as the Isuien Garden, and by houses, which are now considered part of the temple. Some are also now accessible to the public as part of the sightseeing tour along with 7 architectural master-works that are considered national treasures. The Todai-ji Cultural Center exhibits sculptures and treasures in the temple halls, and has also established a library, research center, storage facility and auditorium in the same temple area.

The Great Buddha Hall, or the Daibutsuden is the world’s largest wooden building and measures about 57m long and 50m wide. Although the original temple was in fact larger than the one rebuilt, the model is still able to maintain its same status and reputation.

All Articles about Nara

Things To Do in Nara

Getting Around in Nara