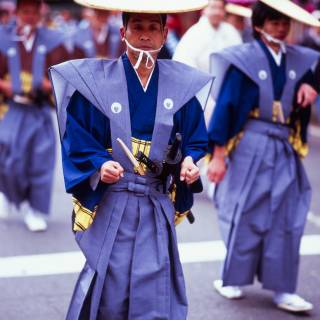 This festival in Nara prefecture traces its origin back to the 12th century.

The name comes from the Wakamiya Shrine – a shrine within the ground of the larger Kasuga Taisha Shrine. This event is really a combination of different festivals which take place on subsequent days, including cermeonies, processions and sumo. There is a map of the different events as well as further details (although it is in Japanese).

One of the highlights of the festival is the “Jidai Gyoretsu” (period procession) that takes place in the afternoon of the third day. 500 people will participate in the procession, each dressed in the manner of people from different eras from the Heian period (beginning in the 9th century) through to the late Edo period (19th century).