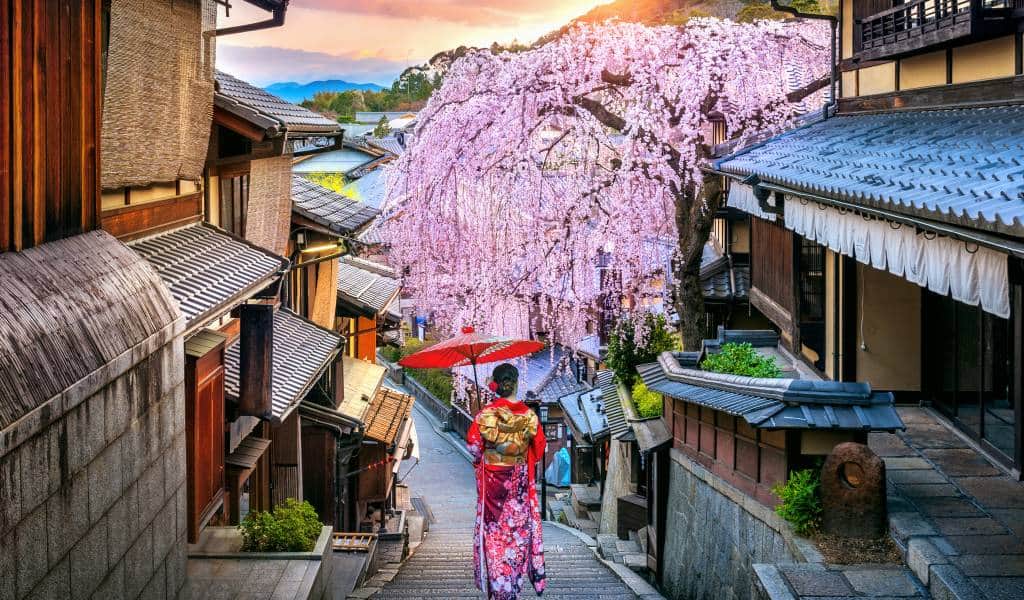 Kyoto (京都), the former capital of Japan, is one of the country’s most popular destinations. It’s home to literally thousands of temples and shrines, including many that are impressively old. Also: traditional festivals, geisha districts, tea houses, and more. And yes, unfortunately, it will be crowded!

Some fine print: Kyoto is both a city and a “fu,” which is similar to, but technically not, a prefecture. The vast majority of attractions that most people associate with Kyoto are in the city. Other spots in the greater Kyoto “fu” worth checking out include: Uji, which is famous for matcha green tea; and Amanohashidate, located in the far north of the region and one of Japan’s three famous views.

Oh, and Kyoto is also sometimes called Miyako, which simply means “capital.” (While Kyoto hasn’t been the official capital in over 150 years, some habits die hard).

Kyoto is centrally located in Japan, on the main island of Honshū, and about 225 miles (360km) west of Tokyo. It’s part of what is known as the Kansai region, which also includes the nearby cities of Osaka, Kobe, and Nara. Travel within the region is easy, with frequent, inexpensive train service connecting Kyoto with Osaka in 30 minutes; Nara in 45 minutes; and Kobe in one hour.

Kyoto sits very close to Lake Biwa, which is Japan’s largest freshwater lake and also really, really old. Kyoto-fu, meanwhile, extends all the way north to the Sea of Japan.

What to see and do in Kyoto

If it’s your first time visiting Japan, you won’t regret a visit to Kyoto. The temples and shrines are world famous, and a bucket list item for many travelers. At the very least you should visit Kinkakuji (the Golden Pavilion) and Kiyomizudera (the Pure Water Temple). For more recommendations see our full list here.

There are also many traditional activities and cultural experiences that you can try like dressing in kimono or yukata. Sure, you could do that in other Japanese cities too, but there’s something special about doing it in the traditional atmosphere of Kyoto. Here are our picks for the top experiences in Kyoto.

Kyoto is an attractive place to visit year-round, although it is particularly spectacular during cherry blossom season in spring and when the leaves turn in late fall. However, these are also the times when you can expect the biggest crowds and the highest accommodation prices.

On the flip slide, winter and summer are quieter months in terms of tourism but the weather isn’t as nice. Summer can get very humid, while winter is quite cold.

Pro-tip: Do as the locals do and head off on a cooling summer day trip.

Kyoto is home to many traditional festivals. The most famous is Gion Festival, which features large floats and parades and last the whole month of July. Daimonji is another famous summer festival, in which bonfires that spell out kanji (Chinese characters used in written Japanese) are lit on the mountainsides.

How long do I need to see Kyoto?

While some itineraries just slip it in as a day-trip from Osaka, we suggest allowing yourself at least two or three full days in Kyoto. That way you can do all the highlights without rushing. Plus, you’ll be able to fit in a few other places like the Philosopher’s Path or the National Museum of Modern Art Kyoto. To be honest though, if you’re really into history and tradition, you easily spend a week (or a lifetime!) in Kyoto without running out of new places to visit.

Kyoto is a somewhat old-fashioned place with strong ties to its history. It’s a charming place that gives visitors a taste of traditional Japan. However, sometimes the “refined” atmosphere can come across as a bit cold.

It is also a region that is suffering from both over-tourism and an aging population. Unfortunately, many young people leave for jobs and opportunities bigger cities like Tokyo.

What is Kyoto known for?

Kyoto is known for being Japan’s former capital, and the “City of a Thousand Shrines.” The city is one of the only places in Japan where Japanese traditional architecture remains in abundance.

One of the most famous drink products from Kyoto-fu is matcha from Uji. It’s considered the highest grade matcha in Japan, and you’ll find lots of matcha flavored food and snacks in souvenir shops, both in Uji and Kyoto. Yatsuhashi (a type of rice cake) is another popular souvenir snack.

Famous local products include ceramics (called Kyo-yaki or Kiyomizu-yaki) and lacquerware (called Kyo-shikki). Basically anything with the suffix “kyo” is a famous product from Kyoto — a city whose brand carries high cachet around Japan.

Kyoto is a great place to stay. Because it’s such a popular destination, there are lots of accommodation options. You’ll find all kinds of hotels, Japanese-style inns, and hostels all over the city.

Generally, we recommend accommodation in central areas around Kyoto Station or Kawaramachi. Kyoto Station, of course, has the best transport connections, while Kawaramachi is right in the heart of the action with lots of shopping/food options and attractions in the area. Staying right by a particular main attraction might seem appealing, but because these are spread out over the city you risk end up spending a lot of time in transit.

Also keep in mind that Kyoto doesn’t quite have the nightlife or food scene of neighboring Osaka. If those things are important to you, maybe consider staying there instead and day-tripping over to Kyoto for sightseeing.

Kyoto, being so major, is well connected transport-wise. The city is a stop on the Tōkaidō Shinkansen, the original bullet train, which runs between Tokyo and Osaka (among many other train lines, both JR and private). While Kyoto doesn’t have its own airport, there are two relatively nearby: Kansai International Airport, which is about 80 minutes by express train from Kyoto; and Osaka’s smaller, sort of inconvenient domestic airport, Itami.

There are direct flights from all over to Kansai International Airport. Sometimes, however, it may be cheaper to fly to Tokyo and then use a rail pass to travel between Tokyo and Kyoto.

It’s fairly straightforward to get from Kansai International Airport to Kyoto.

Travel from elsewhere in Japan

Coming from Tokyo? Here is a breakdown of the best ways of traveling between Tokyo and Kyoto.

Most of Japan’s low-cost carriers fly between Kansai International and major airports around the country, including Tokyo’s Narita Airport and Haneda Airport, Hokkaidō’s New Chitose Airport, and Naha Airport in Okinawa. Legacy carriers like JAL and ANA, which do offer discounted set fare tickets for foreign travelers, fly between Kansai or Itami and all the airports in Japan, major and minor.

Note: Getting between Kyoto and Osaka’s Itami Airport is a pain — taking about 70 minutes by train and involving two to three transfers — so we don’t recommend flying into Itami.

Kyoto Station — the city’s central train station — is well connected to Japan’s extensive rail network. It’s served by the Tōkaidō Shinkansen, which connects Kyoto with major cities like Tokyo and Nagoya to the east and Osaka (Shin-Osaka Station) to the west.

First time navigating Japan’s train network? Check out our guide to all things Shinkansen. You might also might want to learn more about the Japan Rail Pass and other rail passes that can save you money.

If you’re working your way from point to point across the country, limited express JR trains connect Kyoto with popular destinations like Kinosaki Onsen, Kanazawa, Takayama, and Shingū (on the Kii Peninsula). There are services to additional destinations from Osaka as well.

The Kansai area is extremely well served by rail lines, both JR (the regular kind, not just the Shinkansen) and private lines. Especially when traveling from Kyoto to Osaka, Kobe, or Nara, it often makes sense to use a private rail line, rather than relying on JR lines. There are a couple of reasons for this: One is that all of these cities have multiple train stations (not just the main JR station), and it is often more convenient to travel between these other stations. Another reason is that fares are often slightly cheaper.

Of course, if you’re using a rail pass, you generally want to stick to JR lines. However, if you are ONLY traveling around the Kansai area, then a Kansai area travel pass that covers private lines may be a better deal.

Highway buses connect Kyoto with major cities around Honshū, including Tokyo, Nagano, and Hiroshima; Shikoku; and even Kyūshū.

Check Kosoku Bus for other route information and fares. Note that bus prices can be highly seasonal.

Kyoto is on Japan’s network of toll highways, so you can drive here from elsewhere in Japan. The usual caveats, however, apply: tolls and petrol can seriously add up and the Shinkansen is always faster. Kyoto is also a particularly hard city to drive in: it’s an old city, which means many roads are one-way only and extremely narrow. Parking in Kyoto is a pain, and also adds up.

Kyoto is easy to navigate by public transportation. There is a somewhat useful subway network with two lines, one that runs north–south (Karasuma Line) and another that runs east–west (Tōzai Line). To reach most of the sights, you’ll probably rely more on Kyoto’s extensive municipal bus network.

Getting around Greater Kyoto

Some destinations in Kyoto-fu, like Uji, are part of the greater Kansai metro area rail network and easily reached by public transportation. The northern edge of Kyoto (the city) abuts mountains, so destinations in this direction are more commonly reached by local buses, which may be infrequent. You might want to consider renting a car.

Amanohashidate is an exception, reachable by JR Ltd. Express rail.

Where should I go from here?

From Kyoto, you can head off in any number of directions to Kansai’s best getaways. Fun-time city Osaka is just 30 minutes away; Nara, the capital before Kyoto, is 45 minutes away; and cosmopolitan port city Kobe is an hour away — all of this is by efficient, affordable regional rail.

From Kansai, many visitors continue westward, traveling along the Sanyō Shinkansen beyond Osaka and Kobe to castle town Himeji and historic Hiroshima. Or maybe you want to head back to Tokyo via Kanazawa using the Hokuriku Arch Pass. Check out our guide to JR West regional rail passes — good for unlimited travel around Kansai and more — for more inspiration.

Onward travel to some destinations, like Kōyasan, is more convenient from Osaka — something to bear in mind when planning your travels.

All Articles about Kyoto

Things To Do in Kyoto

Getting Around in Kyoto