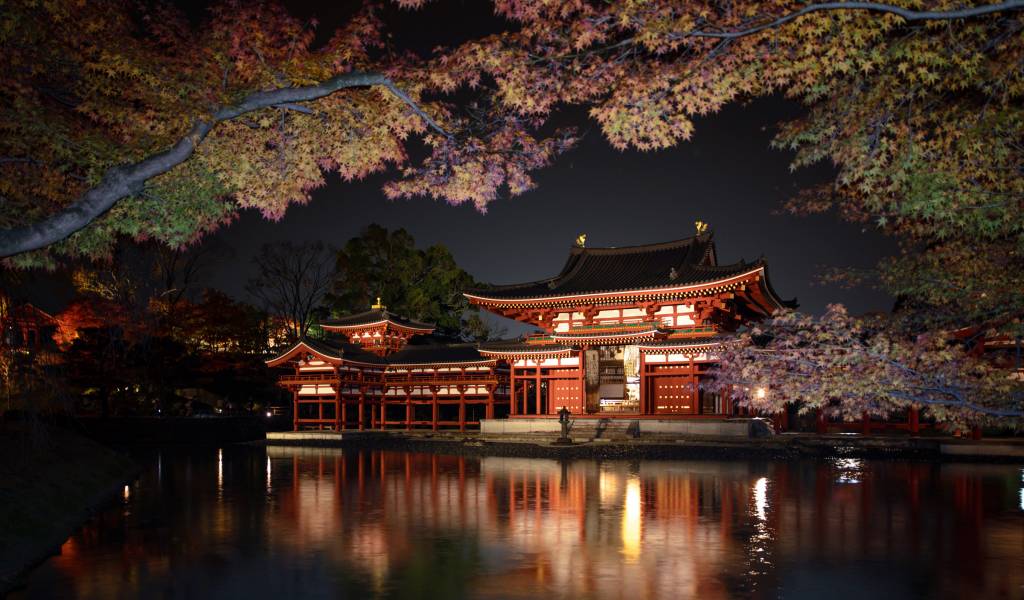 Uji Temple Walk: From the Ten-Yen Coin to the Tale of Genji

The town of Uji makes a great day trip destination from Kyoto or Osaka to enjoy some delicious premium green tea as well as a relaxing walk along the town’s temples. From the ten-yen coin to the Tale of Genji (considered, by some standards, to be the world’s first novel), Uji’s temples are known throughout Japan, so let’s head out there!

If you’re not visiting Uji to try some of its premium green tea then surely you’re visiting to see the famous temple found on the back of those dozens of ten-yen coins in your wallet. Byodoin was built during the Heian Period around 998 AD as a private villa for Minamoto no Shigenobu, one of the ministers at the Imperial court. After his death, the family of a Fujiwara clan  member later converted it into a temple in 1052 AD, which was common at the time.

A year later the famous Phoenix Hall, depicted on the ten-yen coin, was added to the temple complex to house an image of Amida Buddha. Fires during the Boshin War (1868 to 1869)  unfortunately destroyed most of the other buildings, leaving only the Phoenix Hall to remain. Some may argue this is actually a blessing in disguise since the scenic area surrounding it perfectly represents the Buddhist Pure Land—or paradise—on the earth.

The temple is open to the public every day from 8:30 to 17:30 for a minor admission fee of ¥600. There, however, is an additional fee of ¥300 to visit the inside of the Phoenix Hall. The best time to visit Byodoin would be on a clear day when you can see the Hall’s reflection in the pond.

Next up on our temple walk is just across the Uji River from Byodoin, Koshoji Temple. Originally, Koshoji was built in Kyoto in 1233, but fires destroyed the complex and much of its treasures. In 1648 Lord Naomasa decided to rebuild the temple in Uji around the Kannon statue said to be brought in from the sacred grove Tenarai-no-mori mentioned in the Tale of Genji. If you happen to visit Uji in autumn you may be in luck and see the stunning maple foliage engulfing the approach to the temple in shades of red and orange. Koshoji opens its gates at 9:00 and closes them again at 17:00, and its the most cheapo-friendly temple on this walk since there is no admission fee.

From Koshoji its about a 20-minute walk through the north-eastern part of Uji to reach Mimurotoji Temple. Open from 8:30 to 16:00 for just ¥500, Mimurotoji Temple is another temple related to the Tale of Genji as it is said that the character Ukifune is buried here.

What make Mimurotoji so appealing is that in whichever month of spring you decide to pay it a visit you will see its large garden’s seasonal flowers in bloom. From cherry blossoms in April to azalea in May to hydrangea in June and lotuses in July, it is no wonder the temple is also known as the ‘Flower Temple’.

Although you can walk to reach the final stop of our temple tour in Uji at Manpukuji Temple, if its already late in the day (considering that Mampukuji closes at 17:00) you may want to take the train from Mimuroto Station to Obaku Station on the Keihan Uji Line.

The temple was founded around 1661 after the Chinese Zen-Buddhist priest Ingen introduced a new Zen Buddhist sect known as the Obaku Sect with Mampukuji as its head temple. You may in fact notice the influence of Chinese architecture of the time in the construction techniques as well as design of Manpukuji. The Obaku sect made many notable contributions to Japan’s technical advancements, such as land reclamation and bridge-building, and also setting up Japan’s first library.

There is an admission fee of ¥500 to enter Manpukuji Temple and for those who are inspired by the Obaku sect’s teaching there are also Zen sitting meditations for you can participate in for just ¥1,500.

Kyoto
Written by: Bjorn
Filed under: Things to Do
Tags:
Sharing