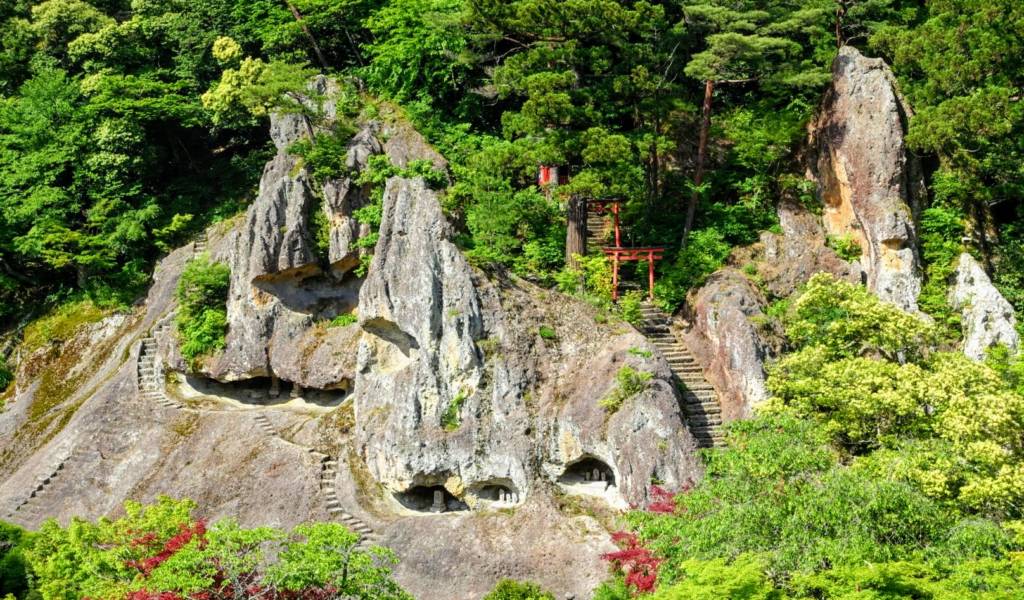 The smallest of the four Kaga Onsen towns, Awazu Onsen is home to a couple of pretty big names, from cave-carved temples to the oldest of ryokan. The town was founded over 1300 years ago by the Shugendo Buddhist monk Taicho Daishi (as legend has it, at least), who was ordered to dig for water sources by the mountain deity Hakusan Daigongen.

The town’s ryokan (traditional Japanese inn) have their own hot-spring source—rather than using a shared central one—so each claim slightly different water properties. The ryokan onsen are all open to the public at certain times so you can try a few out during your stay (in the name of research)! The town also has its own central public onsen, plus a small temple. While the main sights are slightly out of the way, you can easily catch either the CAN Bus or local buses if you’re not renting your own car.

The Soyu is the town’s central public onsen, which was recently refurbished, and has indoor pools in both the male and female sections. It’s a pretty simple affair; soak costs¥420, and you can purchase soap and towels at the entrance. The baths are closed on the 8th, 18th and 28th of each month.

If you arrive peckish, pop into Métissage Bakery for some way-too-tempting and freshly baked treats. There are seasonal options and some classics to be had, with a full view of the baking area to remind you just how fresh it all is.

Depending on your hotel booking, you may need to find yourself some dinner. In the area are a few small restaurants serving sushi, teppanyaki and even an izakaya, plus two small convenience stores in case you need to stock up on snacks. Be aware rural establishments may close earlier or without giving notice (online).

Once thought to be the oldest hotel in the world, Hoshi Ryokan opened in 718 and has since been run by 46 generations of the same family. The hotel was, however, bumped from its perceived standing by a hotel in Yamanashi, which opened a mere 13 years before in 705. Nontheless, it’s an impressive hotel drenched in history and the perfect place for a true Japanese ryokan experience. Not to mention, with rooms available for a fraction of oldest hotel’s prices, it’s a much more affordable slice of history too.

Located in the heart of the small town, the ryokan feels luxurious from the moment you step inside. Staff greet you with tea, and you can take a seat in the garden viewing area to enjoy some traditional Japanese sweets before being shown to your room. The interior is a little retro at times (depending on the price range of your booking), but take it as part of the charm. Meals are traditional and delicious, but you can also save by opting for half board (breakfast only) and making due with a convenience-store meal for dinner instead.

Top travel tip: There are three other onsen towns that make up the Kaga Onsen area, including Yamanaka Onsen, Yamashiro Onsen and Katayamazu Onsen.

Just a few stops away on the local or CAN Bus, the unusual Natadera Temple is a must-see spot in the region. Founded by the same monk who founded the town, the temple is known for the meditation caves that line the rock face surrounding it. Although you can no longer climb the worn-away steps that trail the slopes, the temple grounds are incredible to explore, with a moss-covered main path offering frequent trails and paths away to smaller sites.

The three-storied pagoda, bell tower and temple pond are all stunning, with fantastic views on offer from the observation deck. The temple has deep associations with rebirth and nature, plus it’s home to multiple important cultural properties, locations of scenic beauty and a Green Guide Michelin Star for the stunning scenery.

Yunokuni no Mori Village is ideal for those looking to try their hand at some of Ishikawa Prefecture‘s specialty crafts. The options include soba making, local Kutani pottery painting and Echizen bamboo crafts, along with a dozen others. The crafts are each held in original and carefully relocated traditional buildings, making the village as picturesque as it gets.

You can take most crafts home with you on the day, but some require additional steps like firing, so you may need to pay a little extra for postage. Workshop prices start are around ¥1,100 to ¥3,000 depending on the craft and which items you choose, so it’s affordable enough to try a couple if you have an afternoon to fill! We were lucky that no giant bus tours arrived when we were there, instead it was mainly families and friend groups—all of whom seemed to have an unfairly high level of artistic ability…

Awazu Onsen is one of the primary destinations on the CANBUS Mountain Route. The loop bus service runs seven times a day and takes you to all the main sights and onsen towns of the area. Running between 9 am and 2:30 pm, the first six services go in one direction, while the seventh and final service of the day runs in reverse at around 4 pm.

Awazu Onsen is only half an hour from Kaga Onsen (the start and end point of the route) and has one main stop in the town (with separate stops for Natadera and for Yunokuni no Mori Village). Note that the first CAN Bus of the day does not stop at Awazu, so the first one you can catch is at 11:22 am.

Yunokuni no Mori is only a 20-minute walk however, so if you’re on a tight time schedule and are keen to do some crafting you can head over by foot. There are also limited local buses (approximately once an hour) that pass Yunokuni and Natadera.