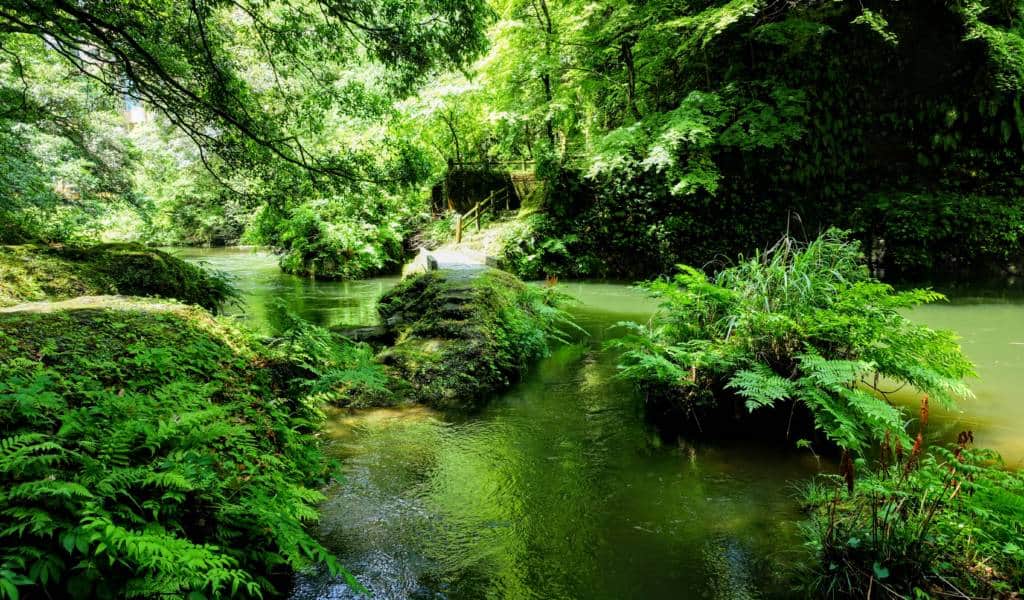 Lush green walks and hot springs make Yamanaka Onsen a worthy day trip from Kanazawa. Plus it boasts a seal of approval from the renowned Japanese poet Basho himself.

Yamanaka is one of the four onsen towns that make up the Kaga Onsen area, and is the nature-lovers option. While the town’s history of lacquerware will satisfy the creatives and the onsen will satisfy pretty much everyone, the stunning Kakusenkei Valley is the cherry on the very green cake.

Legend has it that the town was discovered by Buddhist monk Gyoki, who is one of the town’s four saints. He is joined by Nobutsura Hasebe (a domain lord who revitalized the town in the Kamakura period), Matsuo Basho (the famous poet who championed the town) and Rennyo Shonin (a legendary monk from the area).

With CANBUS access, you can easily spend a day or an afternoon in the town, and there are plenty of nice (and some very nice) ryokan to choose from as well.

Right in the heart of the town you’ll spot Kiku no Yu, the town’s public baths complete with an outdoor footbath. The baths have existed on the same site for 1,300 years and serve the locals and visitors alike, with one building for men and another for women. Once used by Maeda and Daishoji clans for its restorative powers, the onsen was proclaimed to be one of the top three in Japan by visiting poet Basho. The women’s baths are large and bright (we can only hope the men’s baths are too) and there are plenty of lockers and signs explaining the etiquette (but you can learn more with our bathing guide). Entry to the onsen costs ¥420, and they are open from 7 am to 10:30 pm every day of the year.

If you’re feeling peckish and want a snack straight from a 1950s picnic scene, you can cook your own eggs in the onsen water. You can get more info at the information desk, but the special spot is in front of the men’s onsen and is available from 7 am to 9 pm. It does take about an hour, but that’s the perfect time for a dip in the baths yourself —and what’s a better finale than a bath-boiled egg?

Culture and crafts at Yamanazaka Hall

The Yamanakaza Hall is attached to the women’s bath house and serves as a tourist information center. It also houses displays of local lacquerware. Adorning ceilings, walls and individual items, the impressive scenes exhibit the town’s history using 266 colors. On weekends and holidays there are traditional performances of geisha dances and Yamanaka-bushi folk songs, an art brought by traders from Hokkaido and adopted into local culture.

Entry for the performances is really reasonable: adult tickets cost ¥700 and child tickets are ¥350. A combined onsen ticket is available for ¥1,000, which saves you a couple of hundred yen. The performances take place at 3:30 pm and last 40 minutes, leaving plenty of time to have a soak in the onsen and catch the final (reverse route) CANBUS of the day at 5:24 pm.

Setting Yamanaka Onsen apart from its neighboring towns, however, is the stunningly green Kakusenkei Gorge, which is a short walk from the town’s center. It offers an easy walking route along the river’s edge, with cute cafes, a shrine and some unusual sights along the way. Considered the inspiration for Basho’s famous lines “Here, the joy of a good outdoor walk,” it’s a truly refreshing spot to explore.

The easiest walking route is generally between the Kurotani Bridge and the Kohrogi Bridge, a 1.3 km stretch that takes around 25 minutes to walk at a regular pace. However, you’ll probably want to slow down a bit to take in the fresh air and explore the occasional offshoot paths.

The gorge’s bridges are an unusual collection, ranging from the elegant cypress-built Kohrogi Bridge to the twisted red steel of the Ayatori Bridge. The bridge is named after the children’s game “cat’s cradle” and forms an S shape that resembles a rising dragon. It designed by the multi-talented Hiroshi Teshigahara, who is also a film director and an ikebana school founder (the more you know).

As you peer out between the metal, you will probably spot the red umbrellas of the Kakusenkei Kawadoko, a small cafe perched on the riverside. Offering tea and cakes from a local chef, the cafe is open from April to October, and is a pretty cute spot to stop for a treat.

Exploring the trails is a mini adventure, with enough of an unkempt feel to make each unusual sight feel like a discovery and each small path an opportunity. You will likely see the Basho hut, dedicated to the poet and containing a small statue of him, as well as the Higashiyama Shrine if you venture far enough.

Throughout the year, the gorge transforms with cherry blossoms in spring, lush greenery in summer, golden leaves in autumn, and blanketed in snow in winter. Each season is stunning, but keep in mind that not all of the paths are accessible in winter (the views from the bridges are lovely though).

Yamanaka is small, there’s no denying that, but there are a few good spots aside from the baths to visit which can easily fill a leisurely day. The Basho no Yakata Museum is a small but pretty spot dedicated to the poet who visited the town long ago. Aa admirer of the area, he wrote poems inspired by it and declared it one of Japan’s top three onsen.

The museum has a beautiful garden and displays of local lacquerware, with some information in English. It’s open from 9 am to 5 pm (last entry at 4:30 pm) and is a five-minute walk from the bus stop.

The town also has a larger lacquerware museum, Urushi-za Museum and Shop, located just out of the town’s center, dedicated to the 400-year-old history of the art form. Carved on a wooden lathe, vertical slices are used to show the high quality of the local wood, with intricate patterns carved by hand. Urushi-za—also known as the catchily named Ishikawa Prefectural Institute for Yamanaka Lacquerware—shows the process in detail. Open from 9 am to 5 pm daily.

If temples are your thing, be sure to visit Ioji Temple, an impressive spot built by Gyoki 1,300 years ago to protect the town. With panoramic views of the streets below and displays about the town’s history, it has enough to make walking up the hill worth it.

Getting to Yamanaka Onsen

Yamanaka Onsen is one of the primary destinations on the CANBUS Mountain Route. The loop bus service runs seven times a day and takes you to all the main sights and onsen towns of the area. Running between 9 am and 2:30 pm, the first six services go in one direction, while the seventh and final service of the day runs in reverse at 4:20 pm.

Yamanaka Onsen is only half an hour from Kaga Onsen (the start and end point of the route) and has two stops: the Lacquerware Hall and Kiku no Yu Onsen.

Get to know the area: Yamashiro Onsen is another town that makes up the Kaga onsen area.