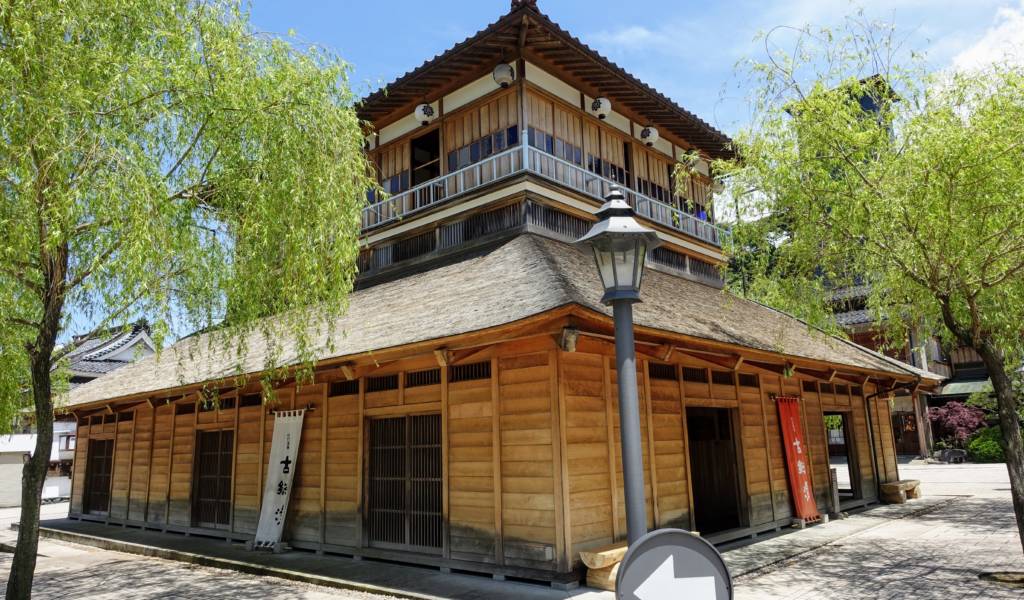 Known for its traditional Meiji-style hot springs and history of pottery, Yamashiro Onsen in Kaga, Ishikawa Prefecture has plenty to explore.

The largest of the four towns that make up Kaga Onsen, Yamashiro has plenty to offer aside from baths (although they are lovely). The healing waters were discovered by Gyoki on his travels over a century ago and are beleived to soothe muscle pain and skin disease. Served by the CAN Bus route, you can easily spend a relaxed day exploring the town, either moving on in the evening or choosing one of the traditional ryokan to spend a night in. Always more beautiful at night, you’ll be joining plenty of yukata-clad couples on their evening strolls if you do stay—with a chance to try a smart hotel bath as well.

Soak in the Soyu and Ko-Soyu

Ko-soyu and Soyu—the two focal points of the town—are public baths offering a chance to try the famous healing powers of the local natural water source. In the center of the town square is the Ko-soyu (meaning old bathhouse), while the Soyu is just across the street.

Although it was rebuilt in 2010, the Ko-Soyu has maintained its original Meiji-era design, complete with glass in the traditional Kutani-yaki colors and beautiful illustrated tiles. The ground floor has two baths (one male, one female) while the upstairs is a divided resting area, with tea, tatami and a balcony overlooking the streets below. The water in the bath is pretty hot, so prepare yourself, although in winter it may be a welcome treat!

The Soyu, the regular public bath, was also rebuilt recently (in 2008) and has multiple baths with different temperatures and views outside. If you want to try both, you can get a joint entry ticket for ¥700 which saves about ¥140 compared to separate tickets.

A sprawled-out temple and shrine complex, these two religious sites hold a wealth of statues and buildings spread through the forested hillside. Founded by Gyoki, the temple is home to statues of the Kannon of compassion and mercy as well as a stairway decorated with letters from the hiragana alphabet.

Hatori Shrine has a small tunnel of red torii gates and is dedicated to the god of weaving. While it was originally related to the traditional skill, today it takes on a more contemporary meaning and those looking to make better connections visit the shrine to pray for luck.

Take in the views at Sazae-do Observation Deck

Hidden along a quiet forest path from the temple, this observation deck is a mini-adventure with lovely views. Well signposted, the walk takes around 10–15 minutes and leads you up the hiragana steps of the temple, past aged statues and abandoned hotels (dont be tempted, they’re alarmed). The view across the mountains are beautiful, with the modern observation building perched alone on a hill.

Have tea at Rosanjin’s Iroha Soan

Dedicated to one of Japan’s most popular ceramacists, this small museum has been preserved to display the works of Kitaoji Rosanjin and his contemporaries. Having stayed in the town for a few months in 1915, he was known for his ceramics, calligraphy and paintings. Explore the house and enjoy some tea while admiring the garden—it’s relaxing, even if you don’t know much about the artist.

Stop off at Marumisa for soba

All that walking and sightseeing will no doubt have left you with an appetite, and there are plenty of places to sate it. Marumisa, a simple teishoku (set meal) restaurant has traditional dishes like soba, udon and curry to choose from, with friendly staff and easily translatable menus.

Learn a few things at the Kutaniyaki Kiln Museum

Beyond being famous for its hot springs, the area is well known across Japan for its pottery. At the Kutani-yaki Kiln Museum, you can see traditional and contemporary examples of the pottery as well as seeing one of the oldest kutani-yaki kiln in existence. There are opportunities to try painting and pottery yourself too, if inspiration takes you.

Getting to Yamashiro Onsen

Yamashiro Onsen is one of the main destinations of the CAN Bus Mountain Route and is only 15 minutes from Kaga Onsen Station. There are six buses a day on the CAN route, running from 9 am to around 2:30 pm. Although they mainly run in one direction around the loop, there is one bus that runs backwards (so to speak) each day, Leaving the Kosoyu Bus stop just after 5 pm.

There are also regular city buses to Yamashiro from Kaga Onsen, which is a only 27 minutes from Kanazawa on a Limited Express Train (¥1,510 for an unreserved seat) or 54 minutes on a regular train (¥760).