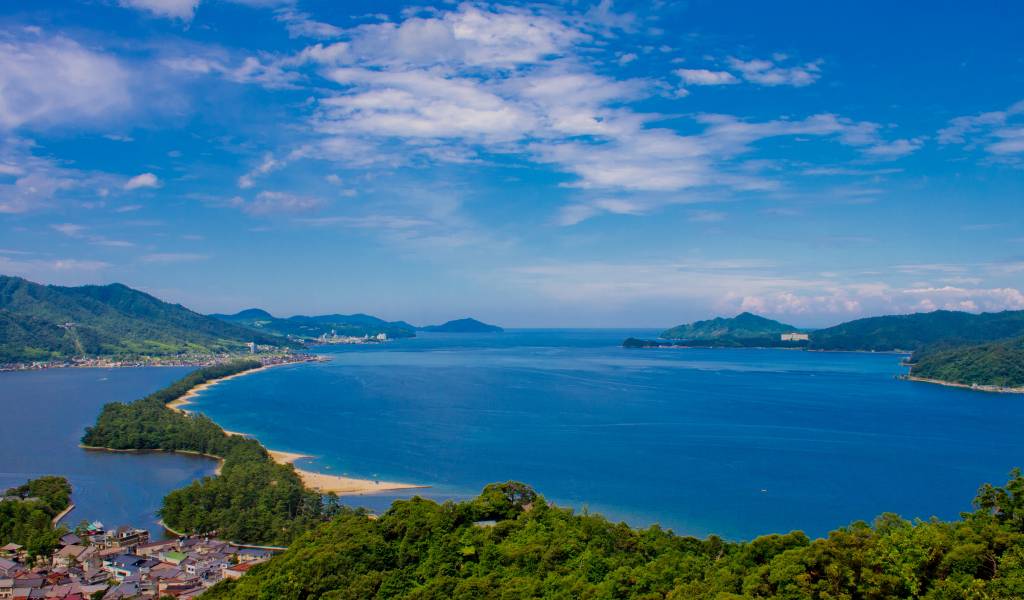 Summer is here (and with it the Kansai heat), so why not head to one of Japan’s “three most beautiful sights” (Nihon Sankei) which just so happens to be right next to the sea. Amanohashidate, meaning “bridge to the heavens”, is about 2-hour journey from the center of Kyoto and is one of the region’s best outdoor areas for a summertime getaway.

Amanohashidate is a natural land bridge that stretches across the Miyazu Bay and is said to be the pathway between heaven and earth—and it’s not hard to see how it got that reputation, what with Amanohashidate being lined by white sand beaches and a clear sea to dip your toes in. Among the white beaches and thousands of lush green pine trees, the land bridge is dotted with various small shrines, shops and rest areas.

So the beaches here pretty much speak for themselves – soft, white sand, clear water and shady pine trees too. There are opportunities to swim, try sea-kayaking and take a sightseeing trip on a boat, so you can experience the sea from all possible levels. The beaches get pretty popular on sunny days and you’ll find plenty of cafes and food stalls, showers and bike rental spots nearby to explore.

The Amanohashidate Shrine where the king of the Eight Dragons is enshrined (dragons are often present in folklore featuring Amanohashidate). And right near the shrine is Isokiyoshisui (“pure water of the beach”), which, as its name suggests, is considered to be one of Japan’s purest water springs.

A bit further in the mountains lies Nariaiji Temple, thought to be a place where wishes come true. The deity Aryavalokitesvara Bodhisattva, represented as a beautiful woman, grants a beautiful body and spirit to those who come to worship her. Whether this is true or not, the temple’s gardens are spectacular in spring with its blooming rhododendron flowers and its red maple trees in autumn.

A mini theme-park located on the southern side of the land bridge, this is one of the spots for the two famous views of Amanohashidate .The amusement park is host to a Ferris wheel, roller coaster, and mini golf course. One of the highlights is the “View of Skyward dragon” aka Hiryukan, which has its own special observation deck.

The entrance fee, which includes round-trip use of the chairlift, is ¥850 for adults and ¥450 for kids, but you can save ¥50 if you get their online discount. Some of the attractions cost extra (¥300 for the Ferris wheel, for example)—but it makes for a great low-key, low-price alternative for those who don’t want to shell out the big bucks at Universal Studios Japan while in Kansai.

On the opposite side of the land bridge lies Kasamatsu Park, the second spot with a famous view of the land bridge. Called Rising Dragon, and Syoryukan in Japanese, the view can only be achieved by turning your back on the view, bending over and looking at it through your legs. Meant to be a view to heaven, it’s pretty impressive – and you might feel a bit silly in the matanozoki position, but there are special concrete podiums for the view so you’ll be one of many! To get there, you can catch the cablecar which is ¥660 for a return ticket and is open from 8am until 5.30pm from April – October, but closes a little earlier in the colder months). From here you can catch the shuttle buses to Nariaiji temple, mentioned above. If you intend to visit both viewpoints, you can purchase a joint-ticket which covers both parks and ropeways for ¥1,200, saving you around ¥300.

From Kyoto, there are several ways to get to Amanohashidate.

Train: The fastest option is to catch the Hashidate Limited Express – it’s direct, takes 2 hours and costs ¥3,880 if you select an unreserved space. To save a little, you can catch the Kinosaki limited express to Fukuchiyama and transfer to the Tango Miyamai/Miyamitoyo line at Nishimaizaru which takes closer to three hours and costs ¥3,270. If you want to go fully local, you will have to change at Sonobe, Fukuchiyama and Miyazu and it will take around three hours and 15 minutes but bring the price down to ¥2,260. Unfortunately, the Kyoto Sea Area Pass was discontinued in 2016.
Bus: Tankai Bus runs three highway busses a day with a one-way ticket costing ¥2,600 leaving from Kyoto. You can book online at Willer or enquire at the bus station.

Kyoto
Written by: Bjorn
Filed under: Things to Do
Tags:
Sharing