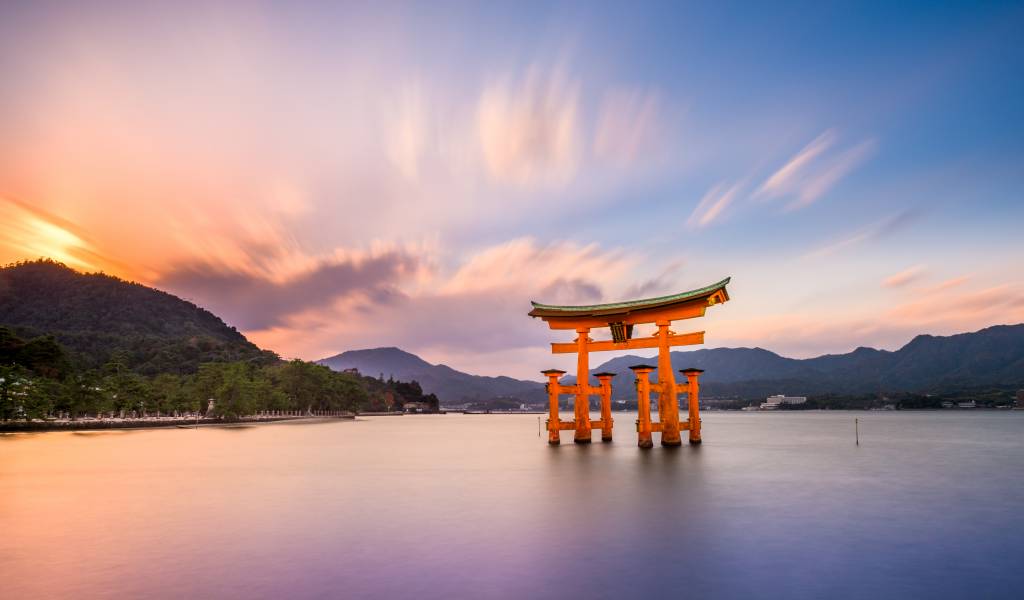 No doubt you’ve heard of the famous all-country Japan Rail Pass. JR West rail passes are a similar deal, but are designed specifically for travel around Kansai and the western half of Honshū (Japan’s main island). They’re cheaper than the national rail pass, which means they could potentially save you even more money — depending on where you plan to go.

JR West covers the western half of Honshū: from Kansai to Shimonoseki (at the tip of Yamaguchi prefecture and right across the strait from Kyūshū). This includes popular destintions like Kyoto, Osaka, Nara, Kobe, Himeji, Hiroshima, and Miyajima.

The key Shinkansen route here is the Sanyō Shinkansen, which connects Osaka (Shin-Osaka Station) with Kobe (Shin-Kobe Station), Himeji, Okayama, and Hiroshima. A few of the passes also include Shinkansen travel all the way to Hakata (Fukuoka), the main entry point to Kyūshū.

So if you’re thinking to focus on this part of the country, JR West has A LOT of options for you. Like, ±10 options.

As with the country-wide JR Pass, these passes will generally pay off if you make at least one long-distance Shinkansen (or limited express) journey within the scope of the pass.

tl;dr If you’re just interested in visiting the major Kansai cities and tourist destinations of Osaka, Kyoto, Nara, and Kobe, you’re best off with a Kansai Area Pass. However, if you’re looking to travel within Kansai and then dip out to other major destinations, consider some of the other passes (like the Kansai–Hiroshima Area Pass), or even purchasing two passes (like the Kansai WIDE Area Pass + the San’in–Okayama Area Pass).

Unlike the country-wide JR Pass, JR West passes can be used on the fastest Nozomi and Mizuho trains on the Sanyō Shinkansen. Passes that include Miyajima cover the ride on the JR Miyajima ferry.

Important! Only foreign passport holders entering on a temporary visitor visa are eligible for JR West passes. The only exception is a limited-time only 3-day Kansai WIDE Area Excursion Pass.

The Kansai Area Pass costs the same no matter where you buy it but all the other JR West passes are cheaper if bought overseas (which you can do online).

The Kansai Area Pass covers travel on regular JR lines between the major cities of the Kansai region, which are also major tourist destinations: Kyoto, Osaka, Nara, and Kobe. It also covers travel to/from Kansai International Airport (on the limited express Haruka train), Universal Studios Japan, castle town Himeji, and points around Lake Biwa; travel on the Osaka Loop line and JR West buses in Kyoto (which travel from Kyoto Station to Takao). It does not cover any Shinkansen travel.

Kansai Area Pass at a glance:

The Kansai Area Pass — the most popular of the JR West passes — is a bit different to other regional passes. Since the cities and attractions in Kansai tend to be a bit more spread out than in the greater Tokyo area, the pass actually makes more sense for daily travel than major intercity travel.

Included with the pass is an additional 1-day pass that is good for unlimited rides on the Kyoto subway and Kyoto area Hankyū and Keihin line trains. It must be used within the validity period of the Kansai Area Pass.

The pass can be bought online in advance or from the ticket office at major JR stations in the Kansai area, including Kansai Airport Station. The price is the same.

The Kansai Area Pass is an excellent deal if you game it right. The cost of a one-way reserved seat ride on the Haruka limited express train from Kansai International Airport to Osaka costs ¥2,400 — the same as the one-day Kansai Area Pass. A one-way trip from Osaka to Himeji is ¥1,520, and the pass makes you eligible for a 20% admission discount at Himeji Castle. So if you plan on doing one or both of these trips, the pass will definitely save you money.

Otherwise you might want to punch in your planned trips into a fare calculator like Jorudan or Hyperdia. For example, the one-way fare between Osaka and Kyoto is only ¥570 on JR lines (and only ¥400 on the Hankyū line). There are also other Kansai area transport/discount passes that aren’t JR, like the Kansai Thru Pass, to consider.

The Kansai WIDE Area Pass covers everything that the Kansai Area Pass does, plus some other key destinations.

Notably, it includes travel to Kansai’s most popular hot spring town, Kinosaki Onsen; Tottori, which is known for its sand dunes; the Kii Peninsula, where the Kumano Kodō pilgrim trails are located; Okayama, which has a famous garden and is also the jumping off point for exploring Naoshima and other islands in the Seto Inland Sea; pretty canal town Kurashiki; and Takamatsu, which is across the strait on the island of Shikoku.

The JR West All Area Pass is the most comprehensive of the JR West passes. It covers travel around Kansai and the Kii peninsula; journeys on the Sanyō Shinkansen from Shin-Osaka to Hakata (Fukuoka) via Okayama and Hiroshima; and limited express trains to Kinosaki Onsen and Kanazawa.

JR West All Area Pass at a glance:

The pass also includes travel to the often overlooked destinations in the San’in region of western Honshū, including: castle town Matsue; Izumo, with its ancient grand shrine; and the well-preserved historical town Hagi.

The JR West All Area Pass is good value if you are traveling extensively around this side of Japan. If you are focusing more on certain regions, one of JR West’s regional passes might make more economical sense (more on those below).

Pro tip: If you have a lot of luggage, or even one huge bag, consider sending it on ahead with a luggage delivery service. New Shinkansen luggage rules from May 2020 dictate that luggage with dimensions of over 160cm but under 250cm will require special reservations (at no extra cost), and bags over 250cm won’t be allowed onboard the bullet train at all.

The Sanyō-San’in Northern Kyushu Pass is a joint pass between JR West and JR Kyūshū. It covers Kansai and all of western Honshū — basically everything that the JR West All Area Pass covers except Hokuriku (i.e. Kanazawa) — plus the northern half of Kyūshū (the same area covered by the Northern Kyūshū Pass). You can ride the Shinkansen from Shin-Osaka all the way to Kumamoto, which would normally cost ¥19,200 one-way!

What is worth seeing in the northern half of Kyūshū? A lot! The cosmopolitan and compact city of Fukuoka; the fascinating and moving historical sites of Nagasaki; castle town Kumamoto; volcanic hot spot Mt Aso; and the onsen resorts of Beppu and Yufuin.

The Setouchi Area Pass, a joint pass between JR West and JR Shikoku, covers travel between the major cities of Kansai, western Honshū’s Sanyō coast (the southern stretch that runs along the Seto Inland Sea, including Okayama and Hiroshima), and both Takamatsu and Matsuyama in Shikoku.

It is an interesting pass as it also covers travel on select ferries that cross the Seto Inland Sea — the only pass to do so. You can travel by ferry from Okayama to Takamatsu, via the island of Shodōshima, and from Matsuyama to Hiroshima. The pass also covers travel on the JR Miyajima Ferry to Miyajima and select local buses in Okayama and Hiroshima (including travel to the ferry ports).

Setouchi Area Pass at a glance:

Note that the Setouchi Area Pass does not cover all ferries to islands in the Seto Inland Sea; for example, you cannot use this pass to visit Naoshima.

It also does not cover as wide an area of Kansai as many other JR West passes. The pass not cover travel to the Kii Peninsula or Kinosaki Onsen.

But you can use it to travel on the Sanyō Shinkansen to Himeji, Hiroshima, and Hakata (Fukuoka). And with the addition of Matsuyama, you can visit one of Japan’s most famous hot springs, Dogo Onsen. In sum it’s a pass for a very specific itinerary — one that takes you to some major sights but also to some more off-the-beaten-track ones.

The following passes cover the same destinations/regions as the Kansai Area Pass (including travel to/from Kansai Airport) — and then some.

JR West regional passes that DO NOT include Kansai

JR West also offers several passes that do not include transit around the Kansai area. These do cover some major destinations (like Hiroshima and Miyajima) but are mostly intended for travelers who want to do a deep dive of one or more of the less traveled areas of the country (like Shimane and Yamaguchi prefectures).

These passes don’t cover the cost of getting to these regions from major Kansai-area hubs. So bear in mind you’ll still be on the hook for a flight to a regional airport or train or bus fare. You can also consider stacking one of the passes below that includes Okayama with the Kansai Wide Area Pass (which covers travel as far west as Okayama).

Just some handy reference tables so you can work out how much you’d save (or not save) by using a JR West pass.

*Fares for children 6–11 are half-price

JR West limited express trains connect the Kansai region with destinations on the Kii Peninsula, in Hokuriku, and along the San’in Coast.

*Fares for children 6–11 are half-price

Who can use JR West passes?

Where can I buy JR West passes?

What is included in JR West passes?

Passes are also good for rides on local (but not intercity) JR West and JR Chugoku buses and for free bicycle rentals from JR West Ekirin rent-a-cycle shops within the scope of the pass.

Passes that include Miyajima cover the ride on the JR Miyajima ferry. The only JR West pass that includes additional ferries is the Setouchi Area Pass.

JR West passes do not cover travel on the privately operated Hanshin, Hankyū, and Keihin rail lines in the Kansai area.

No. Munciple subway networks, like those in Osaka and Kyoto, are not covered by any JR passes. Only the JR Osaka Loop Line is covered, which connects Osaka Station with Namba (via Imamiya) and Tennōji stations (but generally isn’t the best way to get around Osaka).

The Kansai Area Pass comes with an additional 1-day travel pass for Kyoto that covers travel on the Kyoto subway.

Can I use JR West passes to travel to or from Kansai International Airport?

Can I use a JR West pass to travel from Tokyo to Osaka or Kyoto?

Unfortunately, no. This is the big downside to these passes. The only JR passes that cover travel between Kantō (Tokyo) and Kansai are the country-wide Japan Rail Pass and the JR East-West Hokuriku Arch Pass. The country-wide JR Pass covers travel on the Tokaidō Shinkansen — the only pass to do so. The Hokuriku Arch Pass covers travel between the two regions via Kanazawa.

If you plan to travel a fair amount around western Japan — but are skipping eastern Japan — then these passes are a good deal. The price for a one-way Shinkansen journey between Shin-Osaka and Hakata (Fukuoka), for example, is ¥15,280, so a round-trip journey more than covers the cost of, say, the Sanyō–San’in Area Pass.

JR West passes work best if you are flying into Kansai International Airport (KIX). Unfortunatly, there are often fewer flight options to Kansai compared to Narita — though it depends on your departure point. So if you can find a significantly cheaper flight to Narita, then a country-wide rail pass might work out to be a better deal.

This post was first published in November 2016. Last updated in June 2022. While we strive to make sure all details are correct, information is subject to change.