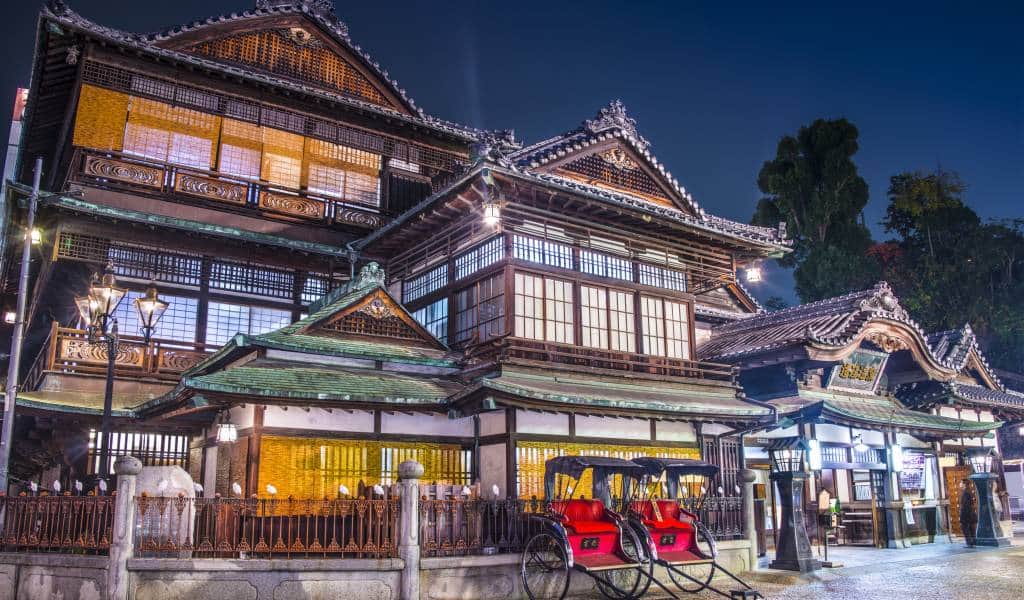 Dogo Onsen: Where Gods, Emperors and Spirits Go to Soak

June 12th, 2018 | Lily Crossley-Baxter
Sharing
Starting in 2019, and estimated to take about seven years, Dogo Onsen Honkan is undergoing renovation works. At no point will the entire facilities be closed; however, access will be limited. Currently only the Tama no Yu bath on the first floor is open. The official website has progress reports on the work and reopenings.

Want to compare options? Consider these other onsen worth traveling for.

The mystical world of Miyazaki Hayao’s anime classic Spirited Away is dreamlike, but if you venture to a traditional onsen resort in Shikoku, you can experience a taste of it for real.

In the eastern corner of Matsuyama, in Ehime Prefecture, Dogo Onsen has 3,000 years of history and is one of the oldest and most famous onsen resorts in Japan. While the city is known as the setting for Natsume Soseki’s Meiji Restoration tale Botchan, there is one bathhouse in particular that is linked to a more modern cultural creation. Released in 2001, Spirited Away follows young protagonist Chihiro as she finds herself trapped in a resort for the supernatural. Aburaya, the opulent bathhouse she later works in, was believed to be inspired by the Dogo Onsen Honkan, which is still open to customers today.

While it may seem a tad obsessive to visit this small corner of Japan to gaze at an ancient building, Dogo Onsen has much more to offer. With ancient links to the Imperial family, beautiful parks, and of course many more hot springs, it makes for the perfect relaxing getaway or a great pit stop if you’re exploring Shikoku.

Bathe with the gods and spirits

Opened in 1894, the three-story wooden bathhouse is shrouded in legends and mythical tales. During the age of the gods, a heron was healed after dipping its injured leg in the hot water; a statue of the heron can be seen on the roof. The onsen was the first to be made an Important Cultural Property due to its historical significance. A room inside is dedicated to author Natsume Soseki, who often visited during the Meiji period, mentioning the onsen and area frequently in Botchan. And if you’re not convinced by its claim to Miyazaki fame, check out the leaflets in the entrance that highlight the similarities to the animated version.

The building is not only loved by legends and creators of fiction, its guests also include multiple generations of the Imperial family, who have their own private baths. The Yushinden was constructed in 1899 and has its own entrance away from the regular guests, allowing a little more privacy. As well as a bath reserved exclusively for the emperor, there is a luxurious space for relaxing. Emperor Hirohito was the last member of the Imperial Family to bathe here in 1952. The Yushinden can be visited on a guided tour.

In addition to admiring the bath from the outside, you can soak in the highly prized waters yourself, with a variety of options depending on your budget. There are two gender-separated public baths you can try. On the ground floor is Kami no Yu, meaning Bath of the Gods, while on the second floor is the smaller Tama no Yu, Bath of the Spirits. Bathing with the spirits in true Miyazaki-inspired style is considered the more prestigious and costs extra, but there are four price options to choose from. While the Japanese ticket office is pretty confusing, you can scan the QR code for English pricing details.

Option 2: ¥840 includes yukata rental and access to the relaxation room, along with a senbei rice cracker and tea. You can stay for an hour between 6am and 10pm with last entry at 9pm.

Option 3: For ¥1,250 you can use both baths and as well as everything included in option two, you get a rental towel and a guided tour of the Yushinden. You can stay for one hour between 6am and 10pm with final entry at 9pm.

Option 4: ¥1,550 allows you all of the above as well as access to a private tatami relaxation room on the third floor, Botchan dango sweets instead of senbei, plus an additional 20 minutes. Your 80-minute visit must take place between 6am and 10pm with last entry at 8:40pm.

A visit to the Imperial section is available for ¥260 between 6am and 9pm, if you’re not interested in seeing the actual baths.

We recommend you arrive close to 6am for the quietest time slot, or later in the evening as afternoons are pretty busy. There’s a time-keeping drum on top of the building to keep you on track too, it rings out at 6am, midday and 6pm. Traditional Japanese bath etiquette is required, and if you’re not sure on that check out our guide for what to do and what definitely not to do.

The onsen has all the usual checkpoints: shoe lockers, gender divides, possessions lockers, shower area and bath, so don’t worry about any surprises (although we can’t account for rogue spirits).

Now, in a town as onsen-heavy as Dogo, it would be a shame not to visit a couple or at least a free footbath along the way. While it’s worth staying into the evening to see Dogo Onsen Honten in all its glory, you can explore the additional onsen in your extra time.

There are plenty to choose from, including the shiny new Asuka no Yu which was built in 2017 and is pretty much the opposite of the Honkan in all but luxury levels. This modern bathhouse has options to bathe for ¥610 or bathe and relax with tea in a tatami room for ¥1,280. If you would like a private room it’s ¥1,690 and a private bath is a little more at ¥2,400.

There is a free footbath next to the Botchan Karakuri Clock, perfect for weary feet if you’ve been exploring the city all day. The clock has hourly performances of music and figurines from Soseki’s famous novel.

Tsubaki no Yu has recently been re-opened after renovation and sits directly opposite Asuka no Yu. Since it is neither historic nor brand new, this can be a good option if you want to avoid the crowds, and the baths are modeled on those of its historic neighbor, so it’s win-win. Entrance is ¥400 and the baths are open from 6:30am until 11pm with final entry 30 minutes before closing.

After a relaxing soak, a gentle stroll is the perfect activity and luckily there is plenty to see in the immediate area, without having to travel back to Matsuyama.

If you’re willing to make the effort, you’ll find the beautifully decorated Isaniwa Shrine at the top of a hill and steep steps. It’s not uncommon to see local weddings taking place or ceremonies as the shrine is an active part of the community. Believed to have been founded on the bathing site of Emperor Chuai and Empress Jingu, the current Hachiman-zukuri–style buildings were constructed in the late 17th century.

Dogo Park is where you’ll find not only copious amounts of cherry blossoms in spring, but also the remains of the town’s ancient castle. The small hill in the middle of the park was once the base of Yuzuki Castle, which stood for around 250 years before being destroyed in the 16th century. The moats remain as they were and samurai houses have been reconstructed, with excavated items on display.

Another spiritual site, the Ishiteji Temple is located a little further from the Honkan, but is well worth the extra steps as it has caves and a pagoda. Kobo Daishi once stayed at this temple in 813, who constructed a building. Its statues were produced by Unekei, a leading sculptor of the 13th century.

As this is the 51st temple of the Shikoku Pilgrimage, you will likely see visiting pilgrims, often in traditional dress. The name of the temple translates to “Stone Hand Temple” and refers to a local aristocrat who, according to legend, sought out Kobo Daishi but to no avail and gripped a stone on his deathbed, only to be reborn still clutching the stone.

As well as the three-storied pagoda there are a variety of buildings, a small selection of stalls. and the Niomon Gate — a national treasure due to its grand age and example of Kamakura era architecture. Follow the cave to find the inner temple and admire the more unusual style of the carvings and buildings on display.

Dogo Onsen is easily reached via tram on the delightfully old-fashioned Iyotetsu Line. You don’t need to buy tickets, you simply pay the ¥180 fare when you alight at Dogo Onsen. You will need the exact change though, so remember to use the change machine on the tram before you get off.

If you’re arriving from the airport or port, you can catch a special shuttle bus run by Iyotetsu. This costs ¥840 from the airport or ¥940 from the port. Both options stop at Matsuyama Station, so if you would rather hop off to catch the tram, it’s ¥630 and ¥750 respectively plus tram fare—so about the same total price whichever you choose.

Thanks to Chris Kirkland for all the insider tips and info!