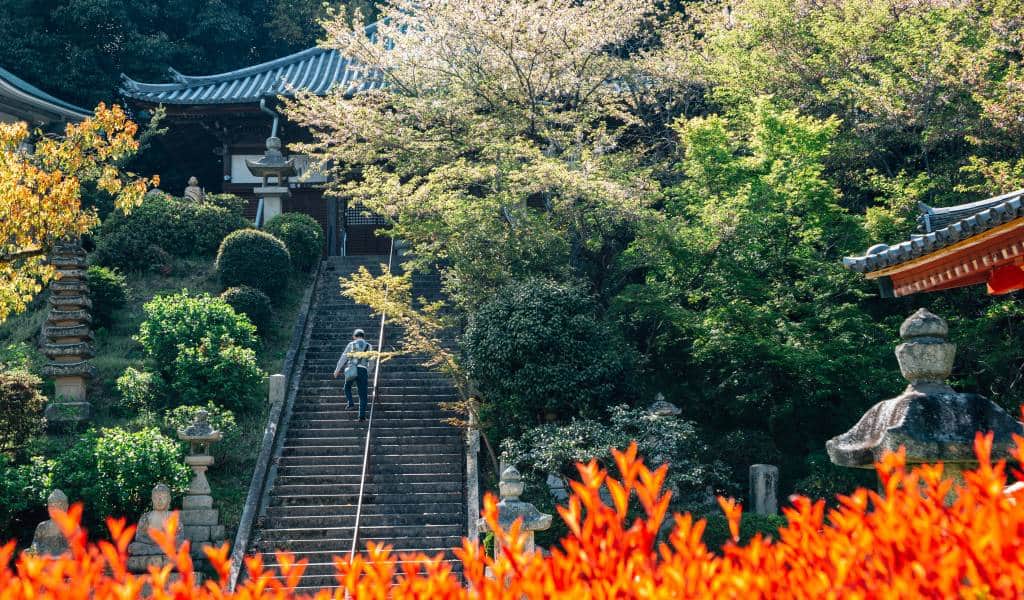 A Guide to the Shikoku 88 Temple Pilgrimage

The Shikoku 88 Temple Pilgrimage is Japan’s most famous—alongside the Kumano Kodo—and most unique pilgrimage routes. It’s a 1,200-kilometer-long journey and one of the world’s very few pilgrimage loops (not trails).

According to Japanese legend, the loop follows the journey of Japanese Buddhist monk Kukai (known as Kobo Daishi after his death), who is believed to have trained or have spent time along the route during the 9th century. As its name suggests, the loop passes through 88 temples that are scattered around the island of Shikoku, the smallest of Japan’s four major islands.

Kobo Daishi (774–835) is one of the nation’s most influential spiritual and religious figures for the uninitiated. He was a monk, calligrapher, poet, and the founder of the Shingon school of Buddhism.

After spending time in China studying Buddhism, Kobo Daishi returned to Japan, where he set up temples across the region and is known for spearheading the development of Mount Koya (Koyasan), a sacred mountain with a large temple complex. After establishing Mount Koya in his final years, Kobo Daishi is said to have returned at times to the Shikoku area, where his teachings and passion for the Shingon school of Buddhism inspired the creation of many of the region’s temples.

In around the 12th century, the first references to the Shikoku Pilgrimage appeared in documents and reports, but the exact route wasn’t specified. Later, around the 16th and 17th centuries the current incarnation of the pilgrimage came to be.

In general, these days, motivations for making the journey vary from person to person. Some folks do it for religious reasons, like praying for health and safety or sending their best wishes to those who have passed. Others, alternatively, enjoy it as a sightseeing route, as it offers incredible views of this still relatively untouched region of Japan.

One of the best things about undertaking the pilgrimage is that there’s no right way to do it. You can start from anywhere and go by any mode of transport. That said, walking is the most traditional and challenging, obviously, and will take about 30 to 60 days—but bus, car and bike are other great ways to break it up.

Top tip: Short on time? Consider the very affordable JR Shikoku Pass, which gives you unlimited travel around the region’s four prefectures (Ehime, Kagawa, Tokushima and Kochi). The pass is available for 3, 4, 5 or 7 days of travel, so it’s a good option for those planning a shorter pilgrimage itinerary.

Given that the pilgrimage is a loop, there’s no strict beginning or end, but if you were to go from temple number 1 to number 88, you’d start with Ryozenji (霊山寺) in Tokushima, and finish at Okuboji (大窪寺) in Kagawa.

In terms of choosing which temples to add to the route, it’s best to learn about the Shikoku region and see which areas appeal to you. Once you have that nailed down, you can plan the pilgrimage around what you want to see. The island’s four prefectures (Kagawa, Tokushima, Ehime, and Kochi) each have their own appeal, culture, food, and reasons for exploring, so doing some homework is beneficial.

What to do at a temple

Although these days the temples are popular tourist destinations, it’s worth noting that they are still sacred sites and should be respected as such.

A handful of small gestures and routines aren’t hard to remember and will go a long way next time you visit.

Optional: If you have a pilgrimage book you want to get stamped and signed, you can do so at the Administration Office（納経所) for about 300 yen.

Of course, you don’t have to wear special clothing, but you will see folks wearing a pilgrimage “uniform” of sorts along the route. Here’s a breakdown of the gear and what it means.

Highlights along the Shikoku Pilgrimage route by prefecture

Shikoku’s highlights are plenty, but let’s break down some key attractions by prefecture, so you can get an idea of what you might be in for.

The starting point of the pilgrimage, if you decide to start from temple numberؘ 1, that is. It’s home to Iya Valley, one of the most mountainous and naturally spectacular areas on the island. Dotted with bridges connecting one peak to the other, this corner of Japan feels truly untouched. The prefecture is also home to Naruto, an area known for its swirling whirlpools, which you can catch under the Strait of Naruto near the Onaruto Bridge connecting Tokushima to Awaji Island.

Also home to plenty of mountains (you’re probably seeing a trend here now), Kochi is a great place to also visit if you love katsuo (bonito) and swimming. The prefecture boasts the scenic Katsurahama Beach and the Shimanto River, one of the clearest rivers in Japan. If you have the time and energy, try kayaking down this river for spectacular views.

See our guide for visiting Kochi, the capital city of Kochi Prefecture.

Ehime is a great place to stop off for a little rest and relaxation. The prefecture is home to Dogo Onsen, one of the country’s most iconic onsens, and according to many reports, the inspiration behind Spirited Away. Its capital, Matsuyama, features an impressive castle, and if you head down south, you can visit Ashizuri-uwakai National Park, a spectacular national park that it shares with Kochi.

Officially the smallest prefecture in Japan, what Kagawa lacks in size it makes up for in charm. The prefecture’s capital Takamatsu used to be the main port for Shikoku before the creation of the Seto Ohashi Bridge in 1988. Today it’s known as the home of udon noodles and is a popular destination for those planning to visit the Setouchi art islands like Naoshima on Teshima.

Best time to do the Shikoku Pilgrimage

Shikoku gets warmer earlier than mainland Japan, so the last thing you want to do is to time your trip for the middle of summer. If you want to visit at the beginning/middle of the year, between March and May is best. It’s also spring—an excellent time to catch cherry blossoms along the way.

Alternatively, after summer, between October and November is a great time too. It’ll be hitting autumn, running slowly into the more wintery months, which will be a lot cooler.

Of course, where you stay depends greatly on what part of the pilgrimage you’re doing. One of the most common forms of accommodation is a minshuku (民宿), Japanese budget versions of B&Bs. Typically, minshuku offer futon-style bedding, basic facilities, and breakfast/dinner combinations, too, for an additional fee.

If you’re looking for something a little more upmarket, a ryokan (旅館), a traditional Japanese inn, is another common option.

If you’re going when the weather is suitable, camping is another option, and a great one in Japan given the number of public baths (sento and onsen) available all over the place. But obviously, be prepared to carry all your gear.

Depending on where you begin, your journey to Shikoku may be different. However, the most convenient options are to fly into Matsuyama or Takamatsu airports, which run regular domestic flights to and from Tokyo daily.