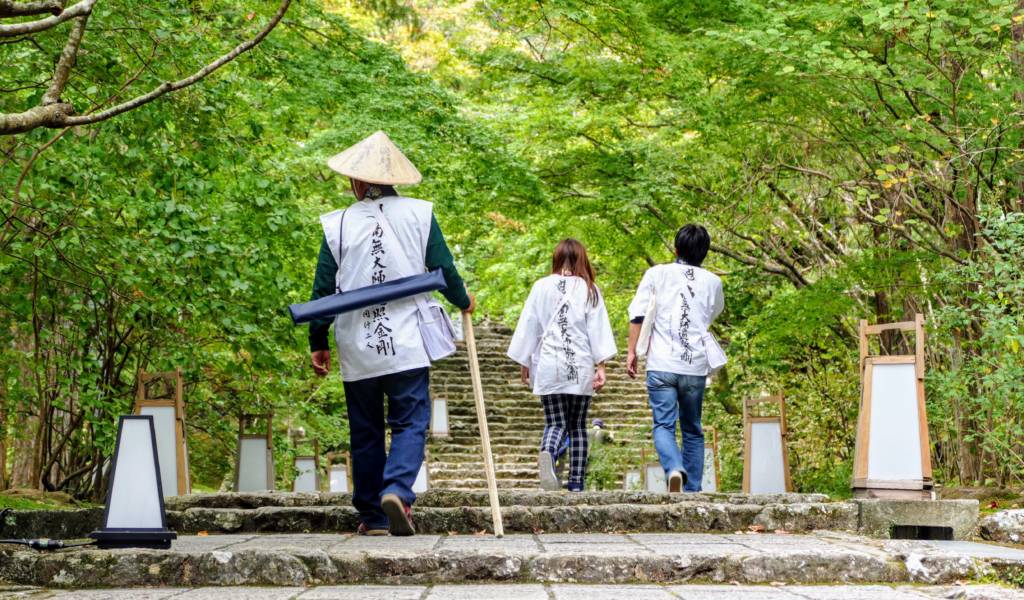 Kochi, capital of Kochi Prefecture, is a lovely city nestling on Shikoku’s southern coast. It’s compact and charming, and the palm-tree flanked boulevards add to a chilled-out vibe (relatively speaking—we’re still in Japan!).

Even better, most of Kochi’s sights can be seen for not much money. Here’s a quick look at what to see, do and eat in Kochi.

What to see in Kochi

Kochi’s most famous sight is its castle, one of only 12 in all Japan with its original keep. It dates from 1749 and the interior was used as a place for the lords to live, rather as a military base, and it’s kept its Edo period appearance. The castle costs ¥420 to go in and also offers a lovely view over the city center.

Yosakoi Inari Shrine is close by the castle, and worth popping in to see the live hens and roosters kept in the grounds (the rooster does not like you giving his birds the eye and will make his feelings about this clear). Inari shrines are associated with foxes—not sure about the irony of keeping chickens in the fox house—and the word is that a real fox used to sleep here in the 1950s.

A few buildings along from Yosakoi Inari Shrine is the entrance to Hirome Market (look for the maneki-neko—waving lucky cat—on the sign). This is where most of Kochi comes to grab a bite to eat and drink. There are 60 small shops and restaurants in here, some with their own seating but otherwise pull up a bench on a communal table. Keep a look out for places serving katsuo no tataki, the local specialty, which is sliced bonito tuna broiled over a straw fire.

The rest of downtown Kochi is a pleasant tangle of streets and shopping arcades. It’s a good place to pick up some yuzu juice as Kochi prefecture produces Japan’s largest harvest of the popular citrus.

At some point you’ll likely stumble across the famous Harimayabashi, though you’d be forgiven for missing it. It’s an underwhelming small red bridge at the bottom of the city’s main north–south street; the story goes that a priest and a local girl fell in love but the romance was forbidden, and they were discovered when he was seen buying a hair comb near Harimayabashi. It’s probably not worth deliberately seeking out, although the marionette clock opposite is kind of cool.

Get out of the center

If you’re a foreign passport holder be sure to take advantage of the My Yu bus pass. The bus hits up various tourist spots for ¥600–[1600] depending on where you want to go and how long you want your pass to run. Buy the pass at Kochi train station’s tourist office and there’s a cheapo-tastic 50% off when you show your passport.

The cheapest pass is ¥600 for one day and gets you unlimited rides as far as Godaisan, which is a mountain with great views over the city. Near the lookout point is the entrance to Chikurinji Temple, number 31 on the Shikoku 88 Temple Pilgrimage route. It’s a large complex with lots of interesting ancient and modern buildings to explore, including a five-storey pagoda, a small treasury house (¥400 entry fee) and large beautiful gardens.

Continue out the far side of Chikurinji and you can pick up the My Yu bus again at the Makino Botanical Garden stop. Of course, if the bus isn’t for ages, you can explore the garden (¥720 entry fee) which has a large greenhouse showcasing 3,000 seasonal and tropical plants.

If plants aren’t your thing, there’s a small shop nearby selling various flavors of ice cream while you wait (the sweet potato is delicious and an exciting purple shade) which is handy, because the bus only runs once an hour on weekdays and every couple of hours on weekends and holidays. The My Yu bus does have a rather clever system for showing whether you’ve missed the bus you’re aiming for, though. Each stop has a board with a series of hooks for each timetabled departure, and the drivers move a keyring along the hooks when they pass.

For ¥1,000 (before discount) your one-day My Yu pass will take you all the way to Katsurahama Beach. It’s extremely picturesque—just don’t try swimming, the current is too strong. There’s also a small shrine, an aquarium and memorial museum to Sakamoto Ryoma, who helped overthrow the shogunate. Be warned that the Tosa Dog Museum is not as cute as it sounds, as it’s centered around dog fighting.

But oh boy, that limited express. It cuts through the Iya Valley with stunning views of rivers and forested mountainsides. At a couple of stations there are examples of the area’s famous vine bridges on the platforms. There are some beautiful train journeys in Japan and this must rank among the finest.

You can also fly, but… why would you when the train is that good?

To be honest, not many airlines fly into Kochi. It’s just JAL and ANA from Tokyo Haneda, Osaka Itami and Fukuoka, and Fuji Dream Airlines from Nagoya. The train really is the way to go.

Kochi
Written by: Rachel Holdsworth
Filed under: Things to Do | Travel
Tags:
Sharing