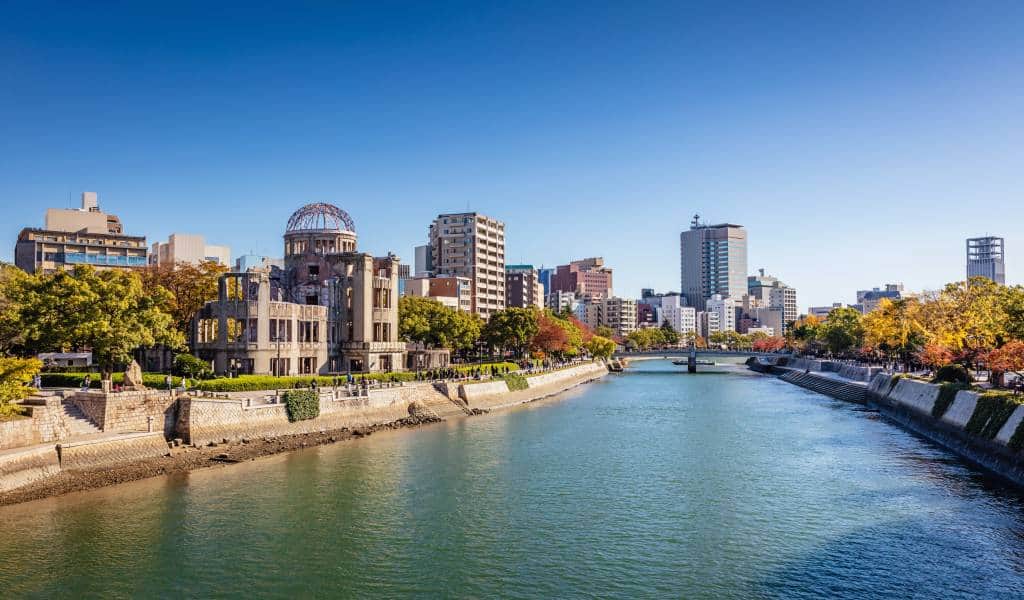 Cities and Towns in Hiroshima

Despite the passage of more than 70 years, the name Hiroshima is still synonymous with the horrors of nuclear warfare. The people of the city most definitely haven’t forgotten, but they have moved on. The city is modern and cosmopolitan with well-developed infrastructure. Hiroshima is more than just the city too, it’s the name of the surrounding prefecture which stretches along the Japan Sea from the north east to the south west.

Although Hiroshima Airport does have some international flights, it’s primarily a domestic airport, with the majority of flights to and from Haneda Airport in Tokyo. Passenger volume has been decreasing in recent years though, as the Shinkansen continue to cut the travel time from Tokyo to Hiroshima with faster and faster trains.

There are bus services that can be booked through Kosoku Bus which run from Tokyo (Machida) to Hiroshima Station from ¥9,200. The overnight trip takes a gruelling 11 hours.

Pro tip: The Hiroshima Tourist Pass gives you discounted access to the streetcars, buses and ferries—check it out.

The JR Sanyo line is the best way to get around within the prefecture. The train from Hiroshima to Miyajimaguchi (where you can catch the ferry to Miyajima) is ¥410 and takes 25 minutes. If you’re already in the middle of Hiroshima, getting to Hiroshima Station can take a while so it might be quicker, more convenient (and cheaper) to use the Hiroden tram (streetcar) system (from ¥190). Line 2 (the Miyajima line) goes all the way to Hiroden Miyajimaguchi station which is a stone’s throw from the ferry terminal.

Where to Go and What to Do

Number one stop is probably going to be the Genbaku (A-Bomb) Dome and Hiroshima Peace Park. Both can be reached from Hiroshima Station using the Hiroden trams. Lines 2 and 6 both run past the area. You should get off at the Genbaku Dome Mae stop (20 minutes, ¥150). We recommend booking a guided tour to experience these historic sites.

The other big attraction in Hiroshima is the iconic torii gate of Itsukushima Shrine that appears to float on the surface of the water at high tide. The shrine is on the aforementioned island of Miyajima. The ferry from Miyajimaguchi takes 10 minutes and costs ¥180.

If you’re pressed for time, take a guided bus tour which takes in all the main sites for ¥5,000.

All Articles about Hiroshima

Things To Do in Hiroshima

Getting Around in Hiroshima