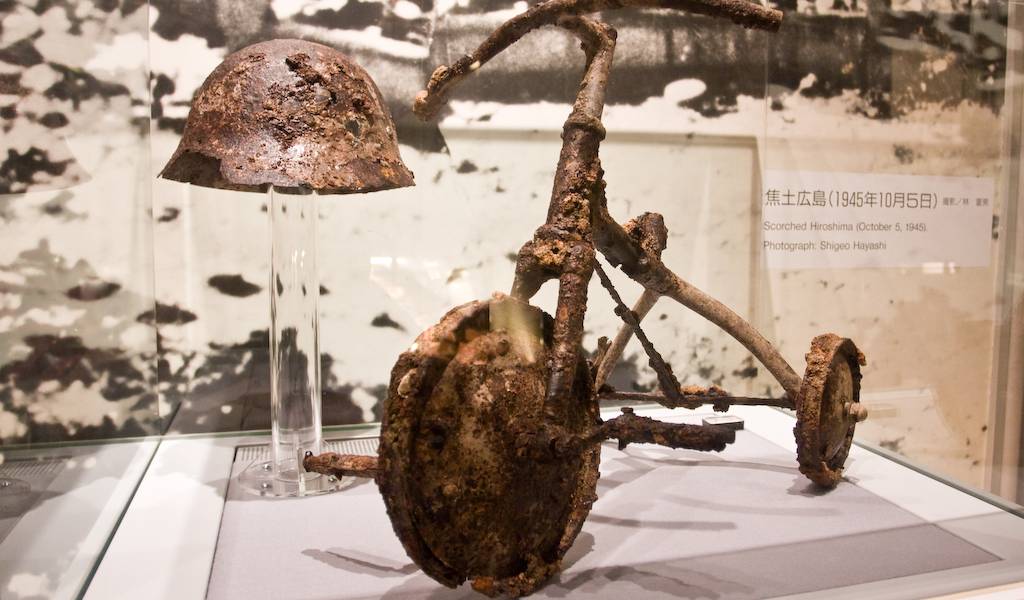 A city known for its darkest moment, Hiroshima’s memorials provide an educational and emotional look at the events on August 6th, 1945.

A flourishing city, Hiroshima’s past is an ever present, but not defining quality for the residents. Internationally, however, the city serves as a symbol of nuclear disarmerment campaigns and anti-nuclear weapon awareness. In memorial to the atrocities of that day the city has a dedicated museum and peace garden located close to the drop-point of the first atomic bomb used on a city in world history.

The Museum is located in the Hiroshima Peace Memorial Park, which contains a number of monuments and buildings in memory of the first time a nuclear weapon was used on a city in the final months of World War II. The most famous of these monuments is the ruins of the Hiroshima Prefectural Industrial Promotion Hall, now commonly known as the A-Bomb Dome.

The area where the park is now located was once downtown Hiroshima—a bustling neighborhood that became little more than a field of rubble after the atomic bomb, code-named “Little Boy”, was dropped on the city on August 6th, 1945. In 1954, a large area was set aside to create the Memorial Park and it remains a large and tranquil green space in the middle of Hiroshima today; a stark contrast to the destruction and terror that led to its formation.

Alongside the A-Bomb dome, the park also has the Children’s Peace Memorial, which is dedicated to the memory of Sadako Sasaki and thousands of other children who died as a result of the bomb; a Memorial Cenotaph which contains the names of all those who died as a result of the bomb (currently numbering over 220,000 and updated yearly); a Peace Flame, which will burn continuously until all nuclear weapons are removed from the world;  the Atomic Bomb Memorial Mound containing the ashes of thousands of unidentified victims collected in the aftermath of the blast; and many more.

Entrance to the park and its monuments is free and it is open 24-hours a day. However, some buildings and facilities like the Museum, have an admission fee and opening hours.

The Museum was opened in 1955 and contains a number of artifacts from the bombing. They are categorised by the types of damage the bombing inflicted. Some were damaged by the vaporising heat of the bomb (like molten roof tiles and shows of shadows where people stood at the time of the blast). Then there was the power of the blast itself, which flattened houses and shattered possessions and windows for miles around the hypocenter. A number of the victims succumbed to the conflagration that enveloped Hiroshima after the actual bombing. But most distressing are the artifacts showing the effects of the radiation, such as human hair, nails, and skin that fell off as a result of radiation poisoning.

Other parts of the Museum document Hiroshima before the bombing and its place in the Japanese war effort.The American side of the story is not left out either, with U.S. documents and photographs showing the discussions and development of the atomic bombs used.

The Museum also documents the memories of the survivors in the form of drawings, interviews, and photographs. Some survivors also come to the Museum to talk with visitors in person and retell their story. The Museum is certainly very confronting and can make visitors very emotional, but it also stresses its other purpose of pleading for world peace and the abolition of all nuclear weapons. While the evidence of destruction may leave you depressed, there is hope to be found in the strength of Hiroshima’s fight to make sure the atrocity of nuclear bombing never happens again.

Don’t Be a Cheapo-Skate This Time

Don’t skip the ¥200 fee, buy lots of merchandise from the gift shop, and then put a ¥10,000 note in their donation box on your way out. The Museum and its related facilities run at a loss, with revenue recouping only about a sixth of its operating expenses (the rest is covered by the municipal government).

Sometimes, there are more important things than being a cheapo.