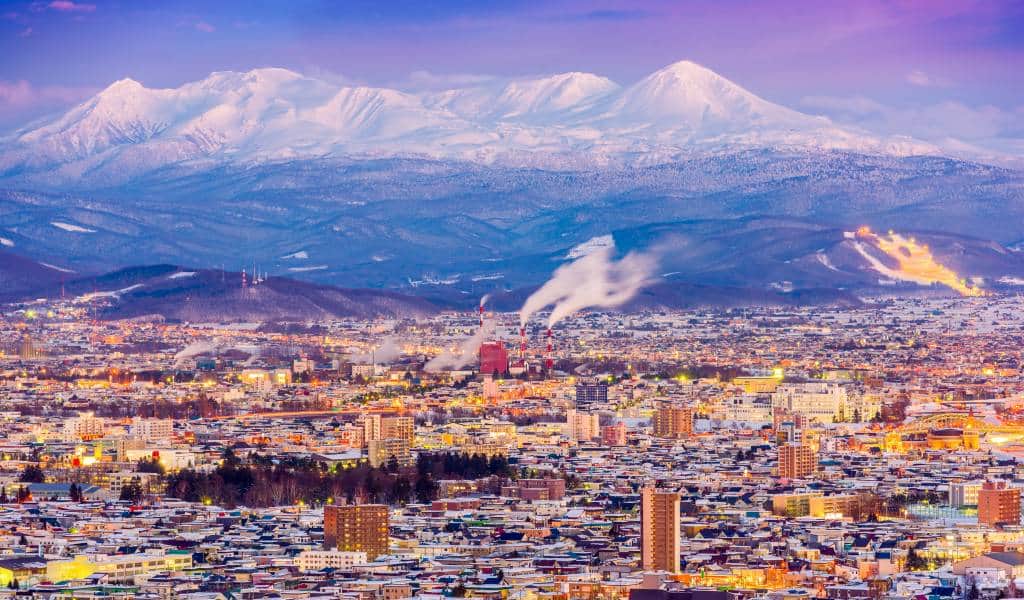 Cities and Towns in Hokkaidō

Hokkaidō, the second largest of Japan’s main islands, sits all the way at the top of the country, closer to Russia than Tokyo. It’s got big mountains, big snow, and big open roads under a big open sky. It’s becoming more and more popular with inbound travelers, who come for skiing and snowboarding, hiking, and hot springs.

Hokkaidō is the northernmost island of Japan, separated from Aomori Prefecture on Honshū (the main island) by the Tsugaru Strait. The capital city, Sapporo, is about 500 miles (or around 800km) from Tokyo and sits at roughly the same latitude as Toronto. To the north, the Sea of Okhotsk separates Hokkaidō from the Russian island Sakhalin and, beyond that, the Kamchatka Peninsula.

Editor’s note: Hokkaidō’s international border with Russia is actually complicated. So is its settler history.

What to see and do in Hokkaidō

Sapporo is the capital of Hokkaido Prefecture and the biggest city in the island, so definitely a must-visit. Sapporo is very famous for its winter festivals its sightseeing spots like Mount Moiwa at the center of the city. During summer however, Hokkaido is famous for its huge parks and its water sports.

At the northeastern tip of the island is located the Shiretoko National Park, in Kushiro, which is considered a UNESCO World Natural Heritage. Shiretoko is known for its dense forests, wild animals and waterfalls. The closest railway station to the park is the JR Shiretoko Shari Station in Shari Town, about 40 km southwest of the national park. The station is connected with the park by infrequent buses. The bus journey lasts for 50 minutes and costs 2800 yen. From Sapporo to the Shiretoko Shari station, via Abashiri line, takes about 6-7 hours and costs 11,000 yen. Because of such high expenses we recommend you to rent a car. Rental car outlets can be found in the Memambetsu Airport, in Abarashiri and Kushiro. The park is located about 7 hours away from Sapporo by car.

The Niseko Mountain Resort Grand Hirafu is located in the Abuta District and famous for its great quality powder snow, which attracts skiers and snowboarders from all over the world. Tickets in high season are from 3,800 yen for five hours up to 21,500 yen for 5 days. The resort also has both Western-styled and Japanese-styled restaurants and cafes as well as skiing and snowboarding rental shops.

When to Visit Hokkaidō

Most travelers from abroad visit Hokkaidō in the winter, on account of all that famous snow. Within Japan, Hokkaidō is seen as a summer destination — a place to beat the heat and humidity the rest of the country gets in July and August. Plus, there are all those colorful flower fields.

Summer is also the season for hiking. First snowfall in Hokkaidō is early, sometimes as early as September in the mountains.

Hokkaidō has a long ski season, starting usually around mid-December and lasting through March and, in most years, well into April and even the first week of May for spring skiing. Peak season is generally considered to be January and February.

Read up on what’s new for the season at Niseko.

Accommodation in Hokkaidō is weird and uneven. Sapporo has a full range of options, from nice downtown hotels to basic hostels and capsule hotels (and love hotels in Suskino). Hakodate and Otaru have some cute boutique properties and guesthouses. Most other cities just have business hotels, and maybe one slightly nicer hotel.

Niseko has the kind of architectural luxury resorts and chalets that appear in glossy magazines (as well as some more reasonable options). Meanwhile, onsen towns have mostly dated resort properties. Elsewhere, it’s a patchwork of privately owned inns, which can be rustic, eccentric, and/or cosy and lovely. They’re usually not too expensive, at least.

How far in advance do I need to book?

If you are going to Niseko during peak season or Sapporo during the annual Snow Festival then you need to book accommodation as soon as humanly possible.

For most other destinations, summer is peak season, when prices are higher and vacancies fewer. A lot of places are only open seasonally.

Hokkaidō has a network of managed campgrounds with basic facilities and probably an onsen nearby for bathing. Some are free and some cost around ¥500 or upwards of ¥2,000 per person per night for the nicer/more popular ones. Some campgrounds rent equipment, and there are some new glamping spots popping up.

You can fly direct to Sapporo’s New Chitose Airport from major cities in Japan and Asia. Hokkaidō is connected to Honshū by rail (under the strait) and ferry routes.

There are currently no international ferries to Hokkaidō.

Travel from elsewhere in Japan

Your options are to fly, take a train, or a ferry. Trains pass through the Seikan Tunnel, which passes under the Tsugaru Strait between Aomori Prefecture on Honshū and Hokkaidō. There’s no public access road through the tunnel so you can’t take a bus to Hokkaidō — but you can put a car on a ferry, if you like slow and somewhat complicated travel.

Coming from Tokyo? Compare all the different ways to travel from Tokyo to Sapporo.

Japan’s low-cost carriers run routes between New Chitose and Tokyo’s Narita and Haneda airports, Kansai International Airport (KIX), Fukuoka Airport, and Naha Airport in Okinawa (among other major cities). Hokkaidō also has a whole bunch of regional airports, but only JAL and ANA fly to those.

Note that flight prices to Hokkaidō are highly seasonal and prone to fluctuation.

The Hokkaidō Shinkansen runs from Tokyo to Hakodate (Shin-Hakudate-Hokuto Station), Hokkaidō’s southernmost major city. That’s a 4.5 hour journey of over 500 miles (over 800km)! Full fare for a one-way regular class reserved seat is ¥23,430, so you probably want to use a rail pass to save money.

In addition to the nationwide Japan Rail Pass, some regional rail passes from JR East cover travel on some or all of the Hokkaidō Shinkansen. If you’re not eligible for a rail pass, be sure to look for discounted Shinkansen tickets before paying full price.

Fun fact: The Hokkaidō Shinkansen isn’t finished — an extension to Sapporo is already in the works, scheduled to be completed in 2030 (when Sapporo plans to bid for the Olympics…).

From Shin-Hakudate-Hokuto Station, you can connect to travel onwards to Sapporo and other destinations reachable by Hokkaidō’s decent network of limited express and local trains.

No local train lines run through the Seikan Tunnel, so the only way to travel by rail between Aomori and Hokkaidō is to take the Shinkansen. From Shin-Aomori Station (the last Shinkansen stop on Honshū) to Shin-Hakodate-Hokuto costs ¥7,720 (travel time: one hour).

The last overnight sleeper train to Hokkaidō, JR East’s Cassiopeia, was retired in 2016.

Ferries are the only way to travel to Hokkaidō and save on a night’s worth of accommodation. Unfortunately, while the ferry is sufficiently slow, it is not really sufficiently cheap.

Ferries run from ports in Aomori City and Ōma for Hakodate, and from Hachinohe to Tomakomai. Operators: Seikan Ferry, Tsugaru Kaikyō Ferry.

For reference, from Aomori City to Hakodate takes about four hours and costs a minimum of ¥2,000.

Long haul ferries take the better part of a day, and — going in one direction, at least — you’ll hopefully be asleep for a good part of it. There are routes up the Pacific coast from Nagoya or Sendai (operator: Taiheiyō Ferry), and also from Ōarai (operator: MOL Ferry) for the port at Tomakomai.

Coming from Tokyo, Ōarai, in Ibaraki Prefecture, is the nearest departure port for ferries to Hokkaidō; this 17-hour ferry journey costs, at a minimum, anywhere from ¥9,800 to ¥19,200 one-way, depending on the season — and more if you are bringing a car or want privacy.

On the Sea of Japan side, ferries connect Maizaru and Niigata with Otaru and Tsuruga, Niigata, and Akita with Tomakomai. Shin Nihonkai Ferry runs these.

Like elsewhere in Japan, you can get around Hokkaidō by train, bus, or plane. This is also one place where we recommend driving: Hokkaidō is a great place for a road trip.

If you don’t have a lot of time, and want to visit some far-flung destinations around the island, you can consider flying. There are flights on either JAL or ANA between New Chitose Airport and the following regional Hokkaido airports: Hakodate, Kushiro, Memanbetsu, Nakashibetsu, and Wakkanai.

Sapporo also has a smaller, domestic airport, Sapporo Okudama, which has flights to a few other places in Hokkaidō, like Rishiri Island.

The Hokkaidō Shinkansen only travels as far as Hakodate (Shin-Hakodate-Hokuto Station). To get around Hokkaidō by rail, you’ll be relying on a network of limited express trains — that connect Hokkaidō’s major cities — and local trains to other destinations.

One rung below the Shinkansen, limited express trains are still pretty nice: they’re fast, make limited stops, and have reserved seating. They can also be pricey, so take advantage of the excellent value Japan Rail Pass or a Hokkaidō regional rail pass.

Several different operators run long-distance coach services between destinations around Hokkaidō; search routes at Kosoku Bus. The bus tends to be cheaper than limited express trains. For intrepid budget travelers, there are overnight services from Sapporo to hiking destinations like Shiretoko.

Hokkaidō is one place where it may make sense to rent a car. There is the cost of highway tolls and petrol to consider, of course. But at least driving in Hokkaidō is generally pleasant, with scenic views and little traffic. Do be careful of speed traps, deer, and everything to do with winter driving in Japan.

All Articles about Hokkaidō

Things To Do in Hokkaidō

Getting Around in Hokkaidō