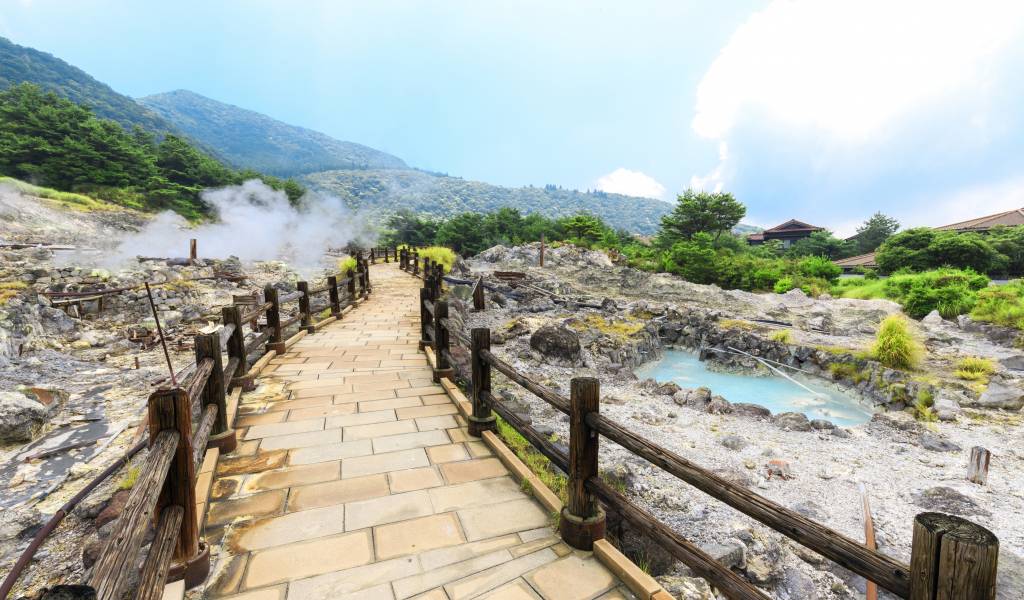 When people think about planning a trip to Japan, images that immediately come to mind are the neon-smothered streets of Shinjuku, the lantern-lit laneways of Kyoto and the gritty, booze-soaked party atmosphere of Osaka. In reality those are just three tiny sides to this incredibly diverse country. In total, the country has 34 national parks, making Japan a naturalist’s dream.

No matter where in the country you’re visiting, there’s a good chance you’ll be within a short train ride from any number of untouched pockets of natural beauty waiting to be discovered. From the north to the south, here’s a guide to some of the most unique and interesting Japan national parks.

Kicking off the list is the country’s northern-most park, Rishiri-Rebun-Sarobetsu National Park. Stretching along Rishiri Island and Rebun Island, the park is lined with weaving hiking trails and carpeted in unique alpine flowers. Perfect for nature photography enthusiasts and geology fanatics, the area also boasts rugged mountain views, and from up high sweeping views of the pristine coastline below.

A flight from Tokyo to Wakkanai, Hokkaido takes 1 hour and 50 minutes.

From Wakkanai, take a ferry to Rebun or Rishiri Island. You can make reservations online with a credit card.

If you’re starting from Sapporo, there is an intercity bus to Wakkanai.

Unless you actually take the time to inspect a world map, it’s easy to forget that the north end Japan is really close to Russia. The countries are so close in fact that in winter chunks of ice flow from the River Amur in Russia down into Shiretoko National Park.

Worth visiting if you’re in Hokkaido, the park is home to an eclectic family of local wildlife like spotted seals and Sika deer. There’s plenty to see offshore too, with the area being a hotbed of aquatic activity, including whale watching and drift ice cruises.

From Tokyo: A flight to Memanbetsu (the closest airport to Shiretoko National Park) takes 1 hour and 40 minutes.

From the airport, the easiest option is to rent a car to get to the park. Other options include train + bus combo routes to get you into the park, however service can be infrequent.

For something unforgettable, and very Instagrammable, pay a visit to Akan-Mashu National Park located in the east of Hokkaido. Here you’ll find Kaminoko Pond, one of the freakiest blue lakes in existence. A surreal sight—it’s said that when the sun catches the pond just right, the water almost glows.

Beyond that, the area is a bit of an aqua wonderland, home to three stunning lakes: Lake Akan, Lake Mashu and Lake Kussharo—the perfect hideaway for those trying to escape the oppressive heat of the summer months.

From Tokyo: Take a flight to Kushiro Airport (1 hour and 40 minutes). From there, take the airport limosine bus directly to the park near Lake Akan (1 hour | ¥2,190).

Alternatively, you can take Semmo Line from Kushiro to Kawayuonsen Station
(1 hour 40 minutes), which takes you to the eastern park of the park (in between Lake Mashu and Lake Kussharo). This journey costs ¥2,100

Touching Aomori, Akita and Iwate Prefecture, Tohoku’s Towada-Hachimantai National Park is one of the best places in the country to visit during autumn, as the foliage-dense forests transform the rolling hills into shades of fiery reds, yellows and gold.

The park is also home to the deep-blue Lake Towada, which provides an excellent contrast to the autumn leaves and is one of the country’s biggest caldera (volcanic crater) lakes.

Note: Buses to Towadako do not run in winter.

In 1955, this little pocket of Tohoku was designated a national park. Following the devastation of the natural disasters of 2011, however, it was re-titled with (Reconstruction) added in as a way to help rebuild the Sanriku region.

Touching the lands of Aomori, Iwate, and Miyagi prefectures, the park has it all: colorful coastal reefs, grass meadows, and even a clan of female free divers known as Hokugen no Ama (who you can meet along the Kosode Coast).

One of the country’s original official national parks, Nikko National Park was awarded national park status back in 1923. Today, it’s as popular as ever thanks to its famous Nikko Toshogu Shrine and Rinnoji Temple, not to mention its very accessible location wedged between Fukushima, Tochigi, and Gunma prefectures.

Dotted with steaming onsen baths and walking trails, one of the best ways to enjoy the park’s main sights is to hop aboard a local boat ride that runs along Kinugawa River.

See our full guide on getting from Tokyo to Nikko.

For a little taste of tropical paradise, pop a visit to Ogasawara National Park on the Japan itinerary. Sitting 1,000 kilometers south of Tokyo, the Ogasawara islands are technically part of Tokyo—but really only in terms of administrative paperwork. The subtropical climate and remote location make for a huge array of sea sports activities like swimming with dolphins, diving, snorkeling and everything in between.

The Chubu Region’s Joshin’etsu-kogen National Park is a hot spring haven. Home to Jigokudani Onsen, the most popular soaking hangout for some of the nation’s hairier inhabitants, the Japanese macaque (aka the snow monkey). The fuzzy locals are most commonly spotted defrosting in the pools during the winter.

Sitting right in the middle of Mie Prefecture, Ise-Shima National Park is home to Ise Jingu a Shinto shrine often referred to as the “Soul of Japan” and one of the nation’s most sacred sites.

Although the shrine is definitely a major tourist draw, it seems that the rest of the park often gets forgotten by visitors, although it’s filled with countless unique quirks and hidden pockets. One of the park’s highlights are the local ama divers of Toba—a collective of freediving women, some of whom are clocking in at over 80 years of age!

If there were an official award for the most famous cherry blossom spot in Japan, then Yoshino-Kumano National Park would take first place. Spread across Mie, Nara, and Wakayama prefectures the park’s Mt. Yoshino is an almost surreal sight in spring as the rolling hillside is carpeted in fields of bubblegum-pink cherry blossoms. As a result, the park is crawling with plenty of flower fanatics with the highest-end camera gear snapping endlessly in the hope of capturing that perfect sakura (cherry blossom) shot.

For those interested in getting to know more a little more about Japanese spirituality, the park is also home to a pilgrimage trail that touches the Three Grand Shrines of Kumano.

Setonaikai National Park: Where you can walk on the sea

The king of all Japan’s national parks, Setonaikai National Park spans a whopping 11–prefectures covering a total area of 900,000 hectares, which includes the sea. However, arguably the most impressive fact about this sprawling mass of national parkland is that you can walk on the sea (well, kind of). If you make it to Tatsuno City in Hyogo Prefecture during spring, low tide gets so low that you can actually walk right on over to two of the nearby islands, the locals call it “Angel Road”.

Beyond spring, there’s still plenty to do including getting up close with some of the country’s cutest water-dwelling locals, the finless porpoise.

Positioned in the center of the Shimabara Peninsula, one of the Unzen-Amakusa National Park’s most noteworthy sites is Mt. Unzen—an active volcano that still rumbles into action every few years, often with fatal results. Dangerously beautiful, it still attracts a number of courageous visitors each year. Thanks to its volcanic landscape, the area is home to a number of onsen baths including Unzen Onsen’s Unzen Jigoku (also known as Unzen Hells).

Probably not a vacation spot for the faint of heart, the area also has a pretty dark and fascinating history. It’s said that in the 17th century, persecuted Christians would be thrown into the bubbling volcanic waters as punishment for their faith.

For something a little more relaxed than bubbling pits of death and ominous volcanoes of Unzen-Amakusa National Park, Iriomote-Ishigaki National Park may be a friendlier alternative. Here you’ll find everything you need for the ideal tropical escape, white sand beaches, crystal-clear water, and schools of colorful fish weaving throughout the coral reefs. The park is also home to Sekisei Lagoon, which measures 20 km wide and 15 km long—the biggest in Japan.

Still have space on your bucket list? Visit these 12 natural wonders in Japan.