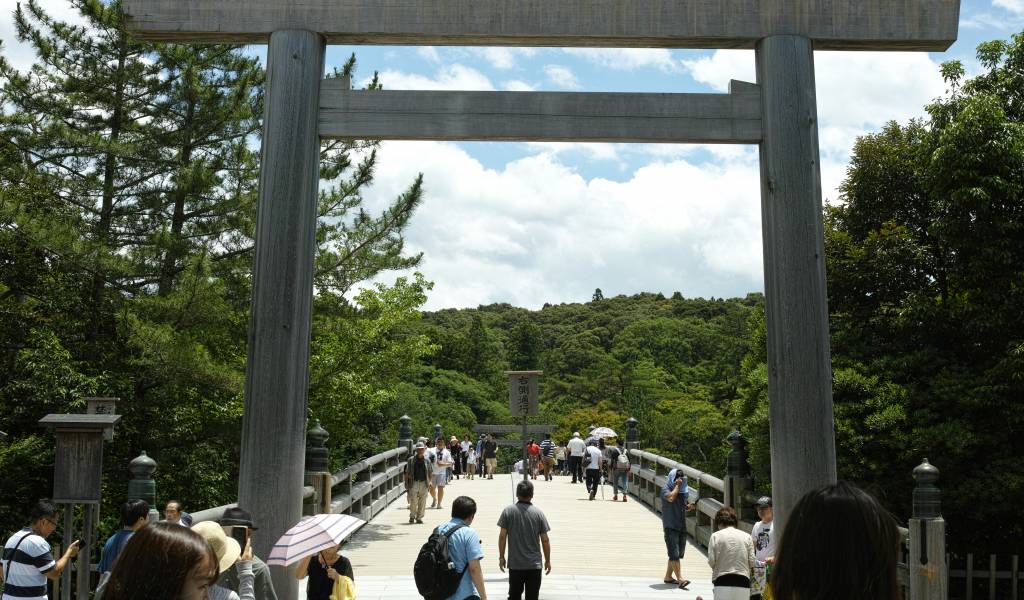 Located in Mie Prefecture about an hour from Nagoya and two hours from Osaka, sits Ise Grand Shrine, the most sacred site in all of Japan.

With a history that reaches all the way back to the third century, it’s the home of Shinto, Japan’s national religion, making it the country’s most sacred Shinto shrine, and one of the most popular drawing an astonishing 6 million pilgrims and visitors per year. The shrine is the home of Amaterasu (the sun goddess), who is the supreme deity in Japan. According to legend, members of the imperial family are her descendents.

To fully understand the importance of Ise Grand Shrine (aka Ise Jingu), let’s take a look at the naming process for Shinto shrines. There are three basic levels of Shinto shrine in Japan: jinja (神社), taisha (大社) and jingu (神宮). Jingu is the highest classification of shrines, and these must have historical ties to or enshrine a member of the imperial family.

Ise Grand Shrine’s history reaches back to Japan’s semi-mythological age, and its founding is recorded in the Nihon Shoki (日本書紀), also known as “The Chronicles of Japan”, the second-oldest book of classical Japanese history.

The tale of the shrine’s spiritual legacy goes like this: The powers that be decided Amaterasu needed a permanent place of worship. The reigning emperor of the time, 11th Emperor Suinin ordered his princess Yamatohime-no-mikoto to find a suitable location. The princess wandered the country for nearly twenty years before receiving a message from the sun goddess herself that the beautiful country of Ise would make a fitting home.

This shrine became known as the inner shrine (Naiku), and about 500 years later an outer shrine (Geku) was added. Both the outer and inner shrine make up Ise Grand Shrine.

The inner and outer shrines

The entire Ise Jingu is actually a network 125 shrines located across Ise City, but Naiku (the inner shrine) and Geku (the outer shrine) is the site’s central location.

The buildings that make up the inner shrine are surrounded by fencing as they’re considered too sacred for the general population, and thus hidden behind fences. Inside this barricade lives an enshrinement of the sun goddess Amaterasu and the Sacred Mirror, known in Japanese as “Yata no Kagami”. This mirror is a piece of iconic Japanese folk legend as it was gifted to Japan’s first emperor by the goddess herself.

Six kilometers from the inner shrine, near Ise-shi Station (which is shared by both the Kintetsu and JR lines), sits the outer shrine, Geku. The site is set against a mountain and contains wide gravel paths and lush, untouched forest. While the shrines can be accessed by foot within an hour or so, there are regular buses that travel between the sites.

Every 20 years, both the inner and outer shrines and the nearby Uji Bridge are rebuilt from scratch. The tradition is part of an ancient Shinto tradition built around the religious ideologies of rebirth and the appreciation for the rejuvenating qualities of the impermanence of nature. These recreated shrines are built offsite using only traditional techniques and later transported to their new location. Leftover wood is repurposed to build the torii gates and is sent to other shrines across the country to be used for restoration. The latest (62nd) reconstruction took place in 2013; the next will take place in 2033.

Looking beyond the shrines

Across the Uji Bashi bridge on the Ise side of the river are Oharaimachi and Okageyokocho, two streets with Japanese-style buildings housing stores that sell traditional foods and goods. Put aside some time to explore those areas as you’ll find traditional gems, like local restaurants that serve some of the freshest, most delicious seafood from Ise-Shima.

On the weekends, impressive taiko (Japanese drum) performances run under the tower in Okageyokocho multiple times a day. It should be noted, however, that while the inner shrine remains open, most of the surrounding restaurants and shops close at 6 pm.

The shrine is home to a number of festivals that run throughout the year, most of which are based around the cycles of rice cultivation. In mid-late February the shrine hosts Kinen-sai, where worshippers come to pray for a bountiful harvest. In October, the shrine hosts Kannamesai, the most important event on the shrines’s annual calendar. During this celebration, the jingu priests offer the first harvested rice of the year and perform a prayer of gratitude dedicated to Amaterasu.

Shikinen Sengu is the 20-year celebration of the rebuilding of Ise Jingu (set to happen in 2033). The entire process involves around 30 rituals and ceremonies, which include the cutting down of the trees and the moving of the Sacred Mirror. To complete the rituals and events for Shikinen Sengu, the process takes eight years.

What to do around Ise Shrine

If you do make the journey to Mie to visit Ise Shrine, putting aside a few extra days to explore the rich, accessible and diverse culture of Mie is worthwhile. The benefit of exploring this corner of Japan is that there are some (currently unavailable), which include transport to Ise Jingu as well as other local area highlights.

Futami Okitama Shrine, home to Meoto Iwa, Mie’s iconic Wedded Rocks is another iconic Mie site, not too far from the shrine. Tied between the two rocks is what’s known as a shimenawa rope, a straw rope that acts as a division between the spiritual world and our earthly world. (currently unavailable) or visit at high tide when the raised sea level separates the two rocks, making them appear connected only by the rope—it makes for an incredible photo.

For more spirituality, take a hike up Mt. Asama, which sitting at a tidy 555 meters high is the tallest mountain in the Ise-Shima National Park area. At the summit, you’ll find Kongosho-ji Temple, and on a clear day, this spot is one of the farthest locations from Mt. Fuji, where you can still see the famous mountain.

If you’ve still got extra time after all that, book a stay at Toshijima Island and visit Mie’s famous Ama divers.

Iseshi and Ujiyamada Station are just under a 10-minute walk from the entrance of the outer shrine. In the area you’ll also find buses connecting the two shrines.

Getting there from Tokyo

The quickest way to reach Ise City from Tokyo is to take the JR Tokaido Shinkansen Line to Nagoya. The trip takes 2–3 hours depending on the train. From Nagoya, switch to the rapid train to Iseshi Station; this second leg takes around 90 minutes. Some of this train uses some non-JR tracks, so JR Pass holders may be asked to pay additional fees.

Getting there from the Kyoto/Osaka area

From Kyoto Station: Take a 30–55 minute JR Tokaido Shinkansen rideto Nagoya. From there, switch to the rapid train to Iseshi Station.

From Shin-Osaka Station: Take the JR Tokaido Shinkansen to Nagoya (50–70 minutes). Then switch to the rapid train to Iseshi Station.

This post was originally published in June 2015. Last updated in May 2020 by Lucy Dayman.