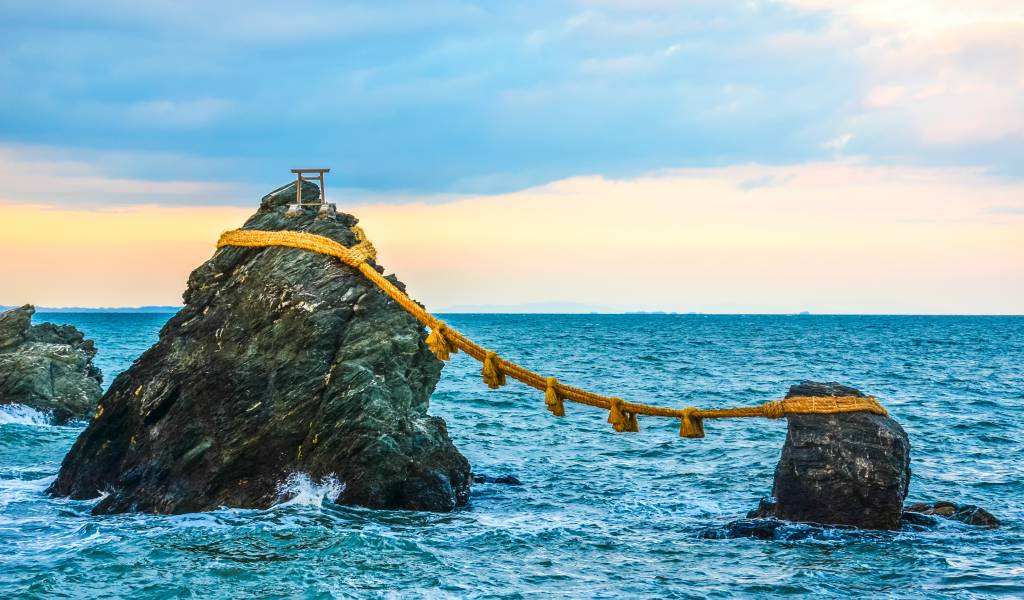 Along the eastern side of the Kii Peninsula, between the busy cities of Nagoya, Osaka, and the well-loved Kyoto, lies Mie Prefecture. Its prefectural capital is Tsu, and the whole area is rich in history and culture. Mie is home to many natural wonders with over one-third of the prefecture being designated as nature reserves and national parks. More than 1,000 km of breathtaking island, the Pacific Ocean coastline, ancient forests, and mountains dotted around make Mie Prefecture well worth a visit.

How to get to Mie Prefecture

The JR Line is the most recommended route to the Mie Prefecture. From Tokyo you can take the JR Tokaido Shinkansen Line to Nagoya, which will take 1 hour and 40 minutes. It is another 58 minutes to Tsu Station in Mie Prefecture using the JR Kansai or Ise Line. The journey is covered by the Japan Rail Pass. Without the pass, it will cost around ¥12,500 one way for a reserved seat ticket.

If you are departing from Osaka Station, the journey will take about 2.5 hours via local trains (with two transfers). Total fare is ¥1,900 one way.

If you can, rent a car to get around this prefecture. Mie is unfortunately quite limited when it comes to public transportation.

What to see and do in Mie Prefecture

The number-one attraction in Mie is the Ise Grand Shrine, located in the Ise region of the prefecture. It’s Japan’s most sacred Shinto shrine and an extremely impressive one too. The sun goddess Amaterasu Omikami is enshrined here and there are nearly 10 million worshippers who visit the shrine each year. In the area there are many interesting historic districts boasting a range of restaurants. Down the coast is the Shima region where you’ll feel like you’re back in the Edo period.

The city of Iga, commonly referred to as Iga Ueno to avoid any confusion with the other Ueno, is well-known for ninja. The Iga school of ninjutsu (art of stealth) was based there and was one of Japan’s two leading ninja schools. Iga Ueno has an excellent ninja museum, Iga-ryu Ninja Museum.

The Wedded Rocks, or Meoto Iwa, next to Futami Okitama Shrine are an iconic sight in Mie. The two rocks (“husband and wife”) are bound together by a heavy, traditional shimenawa rope. The rope represents the division between the spiritual world and our earthly world.

There is also the Suzuka Circuit, which is famous for F1 Grand Prix races. It is the well-known motorsport race track and has a capacity of 155,000 people.

A little unexpected, but there is Spanish theme park called Shima Spain Village. Many Brazilians and Spanish people work here, so there is a great international vibe. The theme park can be quite pricey, but it is nowhere near as expensive as Tokyo Disney prices. The area has glam hotels and golf courses where you can kick back for a relaxing weekend. The park also features multiple roller coasters, an adventure lagoon ride, and many others. To top it off, there are flamenco dance performances, and abundant shopping and dining options too.

From Ugata Station, there is a direct 13-minute bus to Shima Spain Village. A one-way bus ticket will cost you ¥380. If you are driving from the Ise Jingu Shrine area, take Prefectural Route 32 (Ise Road) for around 40 minutes. I bet you never knew you could get a taste of an exotic Spanish townscape in Japan, now did you?

See our two-day itinerary for visiting Ise-Shima National Park for more ideas on what to do in Mie Prefecture.

We must mention the Kumano Kodo route, although it’s not exclusively in Mie Prefecture. Kumano Kodo is a network of pilgrimage roads that leads to Kumano Sanzan, the three shrines of Kumano: Hongu Taisha, Hayatama Taisha, Nachi Taisha. The Ise Grand Shrine in Mie connects to the Kumano Sanzan in Wakayama Prefecture via the Iseji route.

Kumano is honored as a sacred place where the gods have lived since ancient times. This is a popular area for people who entrust their future happiness to the gods by walking over rugged paths through wild nature to visit Kumano, called Kumano Mode (with ‘mode’ meaning visit). it is also designated a UNESCO Heritage Site.

All Articles about Mie

Things To Do in Mie

Getting Around in Mie