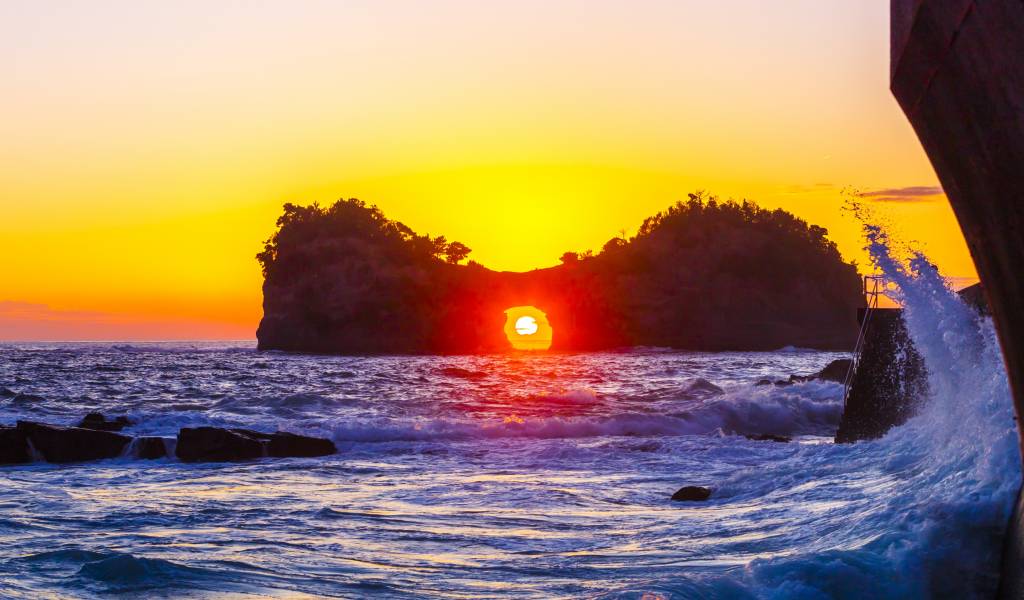 The Beauty of Japan's Kii Peninsula

Filled with World Heritage sites, stunningly beautiful natural creations and spiritual hubs, the Kii Peninsula on Honshu Island is a quiet corner of Japan with plenty to offer.

Even if you’ve never heard of the Kii Peninsula, you’ll definitely recognize some of its most famous destinations: Nachi Falls, the Kumano Kodo pilgrimage routes, and, of course, Mt. Koya. While the word peninsula may conjure images of narrow, beach-lined strips of land, Kii is pretty big. It’s the largest one in Japan and is home to three-and-a-bit prefectures.

Carpeted with dense rainforest, the area has its own microclimate with lots (and we mean lots) of rain. Aside from increased typhoon activity, this means stunning rivers, gorges and waterfalls as well as a cooler climate. Wakayama, Mie and Nara share the peninsula with the southern area of Osaka and have plenty of popular and quieter spots to enjoy.

The peninsula is home to a collective World Heritage Site known as the Sacred Sites and Pilgrimage Routes in the Kii Mountain Range. Divided into three areas, it encompasses shrines and temples, natural areas like primeval forests and the Kumano Kodo pilgrimage routes. Many of the sites are well worth a journey alone, but make for an amazing few days of sightseeing if you have the time.

Mt. Koya is Japan’s most sacred site, home to the burial ground of Kukai (aka Kobo Daishi), the founder of Shingon Buddhism. The headquarters, formed in 819, are surrounded by a quiet temple town and form the end of the Shikoku Pilgrimage, meaning you’ll see some traditionally dressed pilgrims making their final journey. The cool forests offer temple stays, hiking trails, and a sense of spiritual calm hard to find in the more famous cities.

Mt. Yoshino is well known for its stunning cherry blossoms in spring and is also a sacred site of the Shugendo sect of Buddhism. In the Kii Mountains, the two areas are separated by Mt. Aonegamine. With a strong focus on the ascetic practices, there are sacred sites across the mountain range alongside temples and shrines.

A collective name for the three Grand Shrines in the southern part of the Kii Mountain Range, this is one of the most popular areas to explore. Kumano Hongu, Hatayama and Nachi Taisha once worshipped different gods, but soon shared these deities under Buddhism and forming a unique mix of Shinto and Buddhism. The route between the three is known as the Kumano Sankeimichi and also includes two additional Buddhist temples.

Unsurprisingly, the area is packed full of natural beauty, with two national parks (Ise Shima and Yoshino Kumano) as well as primeval forests, unique rock formations and waterfalls aplenty. As well as the locations noted above as World Heritage Sites, there are plenty of other spots to explore!

A well-recognized image of Japan, the Nachi Falls sit behind the Kumano Nachi Taisha Shrine, a perfect combination of nature and spirituality. Forming part of the Kumano Sanzan, this is one of the holiest sites in Japan as well as most visually stunning. The surrounding forests are hauntingly beautiful with ancient root formations and towering millenia-old trees.

Meaning “1000 tatami mats”, this unusual rock formation consists of huge horizontal rocks crafted by the strong waves over centuries to form a plateau of smooth layers you can explore on foot.

Japan’s most sacred shrine, Ise Jingu is visited by over 6 million people per year. It is made up of two main shrines: the Naiku (inner shrine) and Geku (outer shrine) as well as many smaller surrounding shrines.

A small island off the coast of Shirahama, Engetsu is famed for its natural arch, through which you can see the sun setting. Meaning “full moon island”, it can’t be visited due to erosion concerns, but the view is definitely enough.

The Wedded Rocks of Ise

Known as Meoto Iwa in Japanese, these two rocks are joined with a sacred Shinto rope which is replaced in sacred ceremonies throughout the year. They are believed to represent Izanagi and Izanami from the Japanese creation myth. If you arrive early on a summer’s morning, you can watch the sun rise between them.

The small station of Kishi is known for a cute stationmaster you might just have heard of. Tama (II) rose to fame and drew in cat lovers from around the nation. Sadly, the original Tama died in 2015, but Tama II has dutifully filled the role and can be found manning the station from 10 am to 4 pm Friday to Tuesday. Look out for the Tamadensha (cat-themed) train on the Wakayama electric railway as well as plum and toy-themed alternatives.

Home to both ninja and the poet Basho, Iga is an unassuming town in Mie Prefecture with some hidden treats. Whether you relax with an ice cream and throw some shuriken at the Ninja Cafe or explore the original ninja house and museum complete with performance, you’ll be filled with a desire to tiptoe around corners.

While onsen towns are found across Japan, those on the peninsula are pretty unqiue and perfect for weary travelers. The springs in Wakayama are heated from geothermal reactions from a fissure in a tectonic plate, so the water appears in some unusual spots.

One of Japan’s oldest spa towns, bathing here has become an integral part of the Kumano Kodo Pilgrimage and the water is used in purification ceremonies. You can also lower eggs into a cooking well as well as try the two-person tsubo-yu, which is thought to be the oldest onsen in Japan. Legend has it that the waters here change colors seven times a day.

Offering the best of both worlds, this town has a white, sandy beach as well as some of Japan’s oldest hot springs to relax in. While most are further in town, you can find some along the beach like Shirasuna and Sakinoyu which has been in operation for over 1,300 years. Be sure to visit Ashiyu Alley in Ginza Alley—there are foot baths galore.

Here there are no entry fees or crowded baths, you simply bury your feet in the Ohtou riverbed and a warm pool will encircle them. The onsen water rises up through the riverbed creating a natural river onsen. In winter, huge rotenburo are formed along the riverside and it becomes Japan’s largest onsen.

The Katsuura area has plenty of great onsen spots, including the Bokido Cave onsen in Nachi Katsura and the Urashima Hotel which is on its own private island. The cave is a unique experience with views out to the ocean, especially if you manage to get a spot in the small pool by the cave’s edge. The island onsen has a free ferry to reach it and has amazing sea views with waves lapping at the onsen’s edges.

Eating your way around Kii Peninsula

Since much of the peninsula is no use for farming thanks to the rainfall, the food specialties come from different sources. Umeshu (a plum liquor) and soy sauce have been made here for generations and seafood is of course a staple in high supply.

The birthplace of soy sauce, Yuasa has been brewing the nation’s favorite condiment for over 750 years. Having taught the rest of Japan how to make it, the city is still known for the exceptional quality and flavor, fermenting their sauce for 15 months rather than the required six. You can attend tours of local producers including Kadocho, which is one of the longest-running companies.

Considered the best fish market outside of Tokyo, Kuroshio specializes in tuna and has eye-watering prices raised at the morning auctions. During the day you can see tuna-cutting displays and try deliciously fresh fish from the stalls and vendors within.

Located in Toba, Uramura has a love affair with oysters that has spawned festivals and a busy restaurant scene. Try them steamed, grilled, in miso soup, raw, or fried—even on pizza (weirdly nice, if you’re wondering). You can also pick up tasters here and there or try all you can eat at grill spots in the area. In season from November to March, the oysters thrive in the warm waters of Ise Bay and the nutrient-rich river water which flows in from the mountains.

Responsible for around 60% of ume crops brewing in Japan, Wakayama unsurprisingly has a lot of umeshu. Referred to as plums but actually a kind of apricot, ume become a sweet wine-like liquor during the brewing process. You can tour breweries, sample creations and enjoy the many varieties and flavors on offer. Try Tarujikomi Umeshu Hyakuyaku in Kainan city for tours and workshops.

Using Wakayama as a starting point, the peninsula is easy to explore as the city is under an hour from Osaka and even has direct overnight buses from Tokyo (check Willer and Kosoku to compare prices) Exploring the whole peninsula is possible on public transport, with the Kisei Main Line running along the outer edge and bus routes crossing it. There are a number of passes and special routes designed for the busiest months:

The Koyasan and Kumano Access Bus is pretty new and offers unlimited rides (in one direction) between Koyasan Station and Hongu-Taisha Mae for ¥5,000 for adults and ¥2,500 for children. There’s a transfer at Gomadanzan and it also stops at Ryujin Onsen, so you can hop off at either, whichever direction you travel in. The bus runs between April 1st and November 30th departing in the morning on weekdays and in the early afternoon on weekends and holidays.

The Kansai Wide Pass covers a whole lot more than the Kii Peninsula, but if you’re traveling elsewhere it can be a great option. Only available to those on a “Temporary Visitor” aka tourist visa, it allows for unlimited travel on bullet trains, limited express and regular JR trains from Okayama to Osaka and the surrounding areas. In the Peninsula it covers your travel from Osaka or Nara to Wakayama city and down to Kii Katsuura on the south-east corner. It lasts for 5 days and costs 9,200 yen online.

This post was originally published in August 2018. Last updated: December 2020.