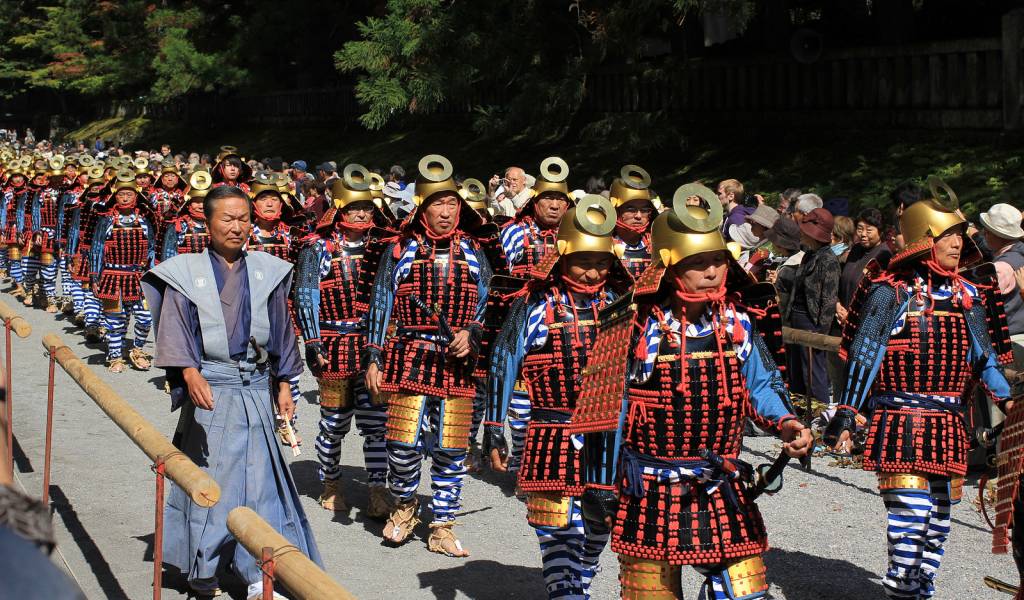 May 2019: Top Cheapo Events Around Japan

May is certainly busy in Japan, with a whole flurry of festivals just in the first weekend for Golden Week!

Wherever you are in Japan, you’ll find something to see, be it a samurai procession, a sake celebration or even a kite-flying competition! Take your pick from the amazing events filling the calendar, and be sure to keep an eye out for any new additions!

Your final chance to see one of the city’s annual geisha performances, this show features geiko and maiko from the Pontocho area of Kyoto. In a small theater built specifically for this event and said to make it one of the most intimate of the shows. You can also choose tickets with or without maiko tea ceremony included.

This is thought to be the largest of the Golden Week festivals in Japan, drawing crowds from across the country. Famed for the extravagant costumes worn by the competing teams, the festival dates back to 1179 and was originally a celebration of the Chinese New Year. It was eventually banned for its perceived extravagance but returned as the Dontaku festival not long after.

With a history dating back 1,300 years, this festival celebrates the days when Nara was the capital of Japan. There are re-enactments of imperial guards and a noble banquet, parades and children’s workshops—making it a great family event. There will be a market for the full three days. Lastly, keen photographers can enter their best shots to the festival competition.

One of the highlights of this local festival is the fox wedding parade. Watch as a traditionally dressed bride and groom have their faces painted like foxes and are paraded through the town on rickshaws.

A festival split in two, this event features some traditional elements alongside its kite-flying day on the 3rd. On all three days, in the early evening, a procession takes place near Hamamatsu Station with floats resembling temples and carrying musicians by Hamamatsu Station. There will be buses running to the kite-flying site from there, costing ¥260 each way.

Offering more than the name suggests, the Hiroshima Flower Festival includes a yosakoi dance festival, flower queen contest, parades and illuminations at night. Over 100 teams compete in the yosakoi on the 5th and there will be stage performances too, so there’s certainly enough to keep you entertained.

Held at a shrine so small it isn’t even on Google Maps, this festival is a fantastic opportunity to see the geiko and maiko of Kyoto (called geisha in Tokyo). On the first evening, the geiko and maiko will entertain with games and drinks, while on the second day there will be a traditional ceremony.

One of the three most significant festivals in Kyoto, the Aoi Matsuri features a procession from the Imperial Palace, through the streets to the Kamo shrines. Over 500 participants dress in traditional clothing and hollyhock leaves and make their way through the city, including an unmarried woman chosen to represent Saio (who, as the youngest female of the Imperial family, was the high priestess of the Kamo shrines).

For samurai lovers, there’s only one place for you to be this month, and that’s Tochigi. With 1,200 participants all dressed in full samurai costume, the procession takes place on the second day of the Nikko Toshogu Shrine Grand Festival. They escort mikoshi to a hall in the shrine grounds and will give you an idea of what the shogun’s army may have looked like.

This bright and energetic festival takes place over two days, with separate celebrations in the nine wards of the city on the first day. On the Sunday there is a big parade along Sannomiya road from noon, with guests from Disney making a special appearance this year.

Taking place on the Katsura River in Kyoto, the Mifune Festival is a sight to behold. Traditional and highly decorative boats carry performers and musicians as they put on a show, with audiences seated on the banks. The festival is an extension of the Kurumazaki Shrine Grand Festival and means the ‘three boat festival’.

Held every year since 1609, this three-day festival features some equally impressive and terrifying floats, known especially for the giant lion’s heads. There will be 350 stalls selling festival favorites and you’ll be able to enjoy a local festival that doesn’t get as many visitors as the bigger ones in Japan.

This is the perfect opportunity to try over 150 different varieties of nihonshu from 50 different brewers who travel from across Japan to attend. If you get your tickets in advance they cost only ¥3,500 and allow you to try all the sake you can handle, with a cheaper ticket available for entry after 3 pm. There are movies, music and food to go with the drinks, so you can make an afternoon of it!