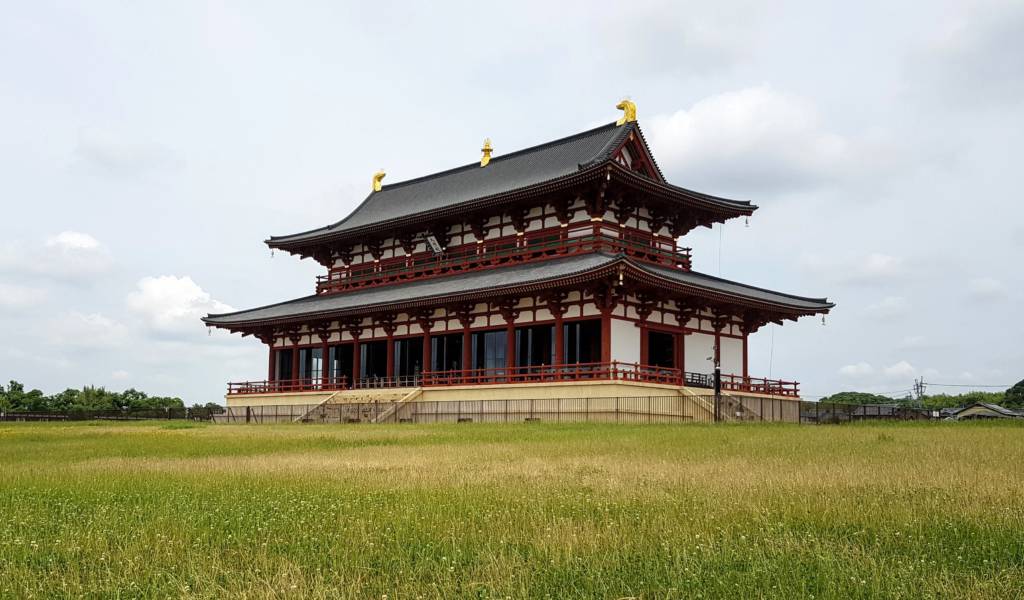 Heijō Palace is a bunch of reconstructed buildings from the time when Nara was known as Heijō-kyō – Japan’s Heain era imperial capital. Although interesting, Nara is packed with historical attractions, so if you’re on a short stay, check those out first before coming here.

All the buildings on the site are recontructions/recreations based on archealogical finds and historical evidence. The vast site resembles a vast historical construction site. The two completed structures are the Suzaku-mon gate (finished in 1998) and the Daigokuden (Imperial Audience Hall) which was constructed between 2001 and 2010. Still under-construction is the Minami-mon gate, located between the other two structures under a huge shroud. There are also modern buildings near the entrance to the site housing a museum, a cafe and park management facilities.

It isn’t obvious, but entry to the Imperial Audience Hall is from the rear of the building—clear signage must be on the construction to-do list. The modern builders of the hall used construction techniques faithfull to the original buildings that occupied the site 1,300 years previously. Suzaku-mon, constructed in an era when historical accuracy wasn’t quite as important, also uses reinforced concrete.

The Kintetsu Nara Line dissects the site with a lone guard on duty at the crossing – just in case the lights and barrier aren’t enough to slow your progress. The Suzaku-mon gate with a train passing in the background makes for an interesting photo.

As mentioned, the site is interesting, but should be lower on your list given the plethora of attractions in Nara. One benefit of Heijō Palace is that since it is a little off the beaten track, it escapes the hordes of tourists that beset the historical sites around Nara Park.

The main entrance to the site is on Omiya Dori, which runs west from JR Nara Station. From the station, it takes about 15 minutes by bicycle or 40 minutes on foot. If travelling in a group, getting there by taxi should be economical.

The site is walkable, but as mentioned, it is huge. We recommend getting around the site by bicycle. Bikes can be hired from the management building to the west of Suzaku-mon. The staff are quite friendly and are happy to explain the best route and things to see.

Other things to do nearby

The main attractions of Nara are located to the east of JR Nara Station, so things to see and do around these parts are a little more spread out. Since you’re in the area, Saidai-ji (Todai-ji’s western twin) is worth a look. To the southwest of the Heijo Palace site is the 8th century Toshodaiji temple and the 7th century Yakushi-ji temple.