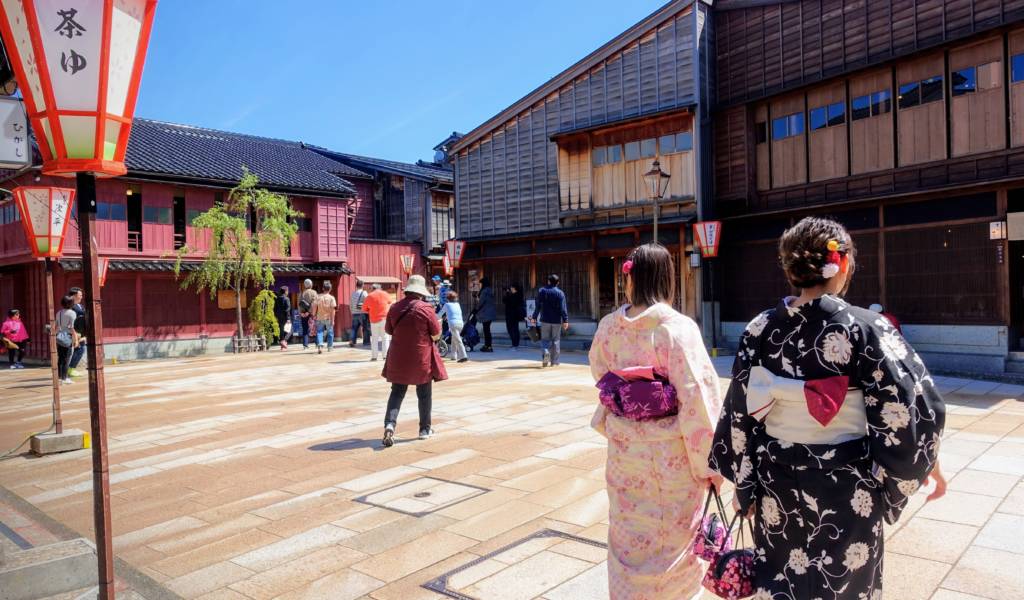 Kanazawa is a city on the western Japan Sea coast of Honshu. At the end of the Meiji period, the city ranked as the fourth largest city in the country behind Tokyo, Osaka and Kyoto. Since then, it hasn’t grown nearly as much as those cities, so it retains much of its old-Japan charm.

Kanazawa, meaning “golden marsh”, is the capital city of Ishikawa Precture. There are superbly preserved samurai and geisha districts in this area, providing an interesting historical insight into Japan. There was also an absence of military targets during World War II, so a lot of the sites are well preserved. Throughout the Edo period, Kanazawa’s ruling Maeda family spurred the growth of the all-important crafts that the city is known for today. From Ohi pottery to gold leaf, it all got started here.

With its many sites to see, from the famous Kenrokuen Garden, a fabulous market and its ever interesting festivals, Kanazawa is a great addition to your Japan travel itinerary. This region can arguably compete with the well-loved city of Kyoto as the historical gem of mainland Japan. Two or three days is a good amount of time to explore this area.

The travel time on the high-speed Shinkansen from Tokyo Station is two and a half hours on the fastest Kagayaki service or about three hours on the slightly slower Hakutaka service. One way tickets to Kanazawa are between ¥13,600 and ¥14,380. If coming from the Kansai area (Osaka, Kyoto or Nara), the Thunderbird express to/from Kyoto for ¥6,380 or to/from Osaka for ¥7,130 are the fastest routes to get there. The travel time from Kyoto to Kanazawa is slightly over 2 hours. Add another 40 minutes to the travel time for the same train departing Osaka.

The closest airport to Kanazawa city is Komatsu Airport, located in Komatsu City to the south of Kanazawa. There are regular flights to Tokyo Haneda, Chitose (Sapporo) and Fukuoka but none to or from the Kansai region as trains between the two areas are frequent, cheap and only take a couple of hours. Three airlines – JAL, ANA and Ibex provide domestic flights while there are international flights to Korea, Taiwan and China through various international airlines from those countries.

There are regular highway buses running from major Japanese cities to Kanazawa. The travel time from Tokyo to Kanazawa is about 8 1/2 hours, 5 hours 40 minutes from Kyoto to Kanazawa and 7 to 7 1/2 hours from Osaka to Kanazawa. Buses heading to/from Kyoto or Osaka start from around ¥3,000 while buses plying the Tokyo o Kanazawa route start at ¥2,280 but on average are about ¥4,000 to ¥5,000. Willer offer hotel and bus combos as well as transport only – which can save you some yen along the way.

Getting Around in Kanazawa

Kanazawa is a relatively small and compact city, so as long as you don’t have mobility issues, getting around is quite easy. You can walk, use one of the city’s rental bikes or hop on (and off) the loop bus if you’re on a tight schedule. See our detailed article on getting around in Kanazawa for more information.

Things to do in Kanazawa

Kenrokuen Garden is our number one recommendation. It opened in 1871 and is one of the three most beautiful lanscapes in all of Japan, along with Mito’s Kairakuen and Okayama’s Korakuen. The spacious grounds were once the outer garden of Kanazawa Castle. There is a wide variety of flowering trees that transforms the garden’s aesthetic as the seasons change.

Next on our highlights list is Omicho Market, the area’s largest fresh food market since the Edo period. The streets are lined with about 200 shops and stalls. You will find excellent seafood and produce here as well other items, such as clothing, kitchen tools and flowers.

Kanazawa is also host to a number of festivals throughout the year. Asano-gawa Enyukai is an event showcasing performances of traditional Japanese dance and music. This is all held on the banks of the Asano-gawa during the second weekend of April.

The beginning of June hosts the Hyakumangoku Matsuri. It marks the first time the region’s rice production hit 1 million koku (around 150,000 tons). There’s a parade of people from the town in 16th-century costumes, torch-lit performances and lanterns that float down the river at dusk. Plus a special tea ceremony too. All of this happens at Kenrokuen.

All Articles about Kanazawa

Things To Do in Kanazawa

Getting Around in Kanazawa