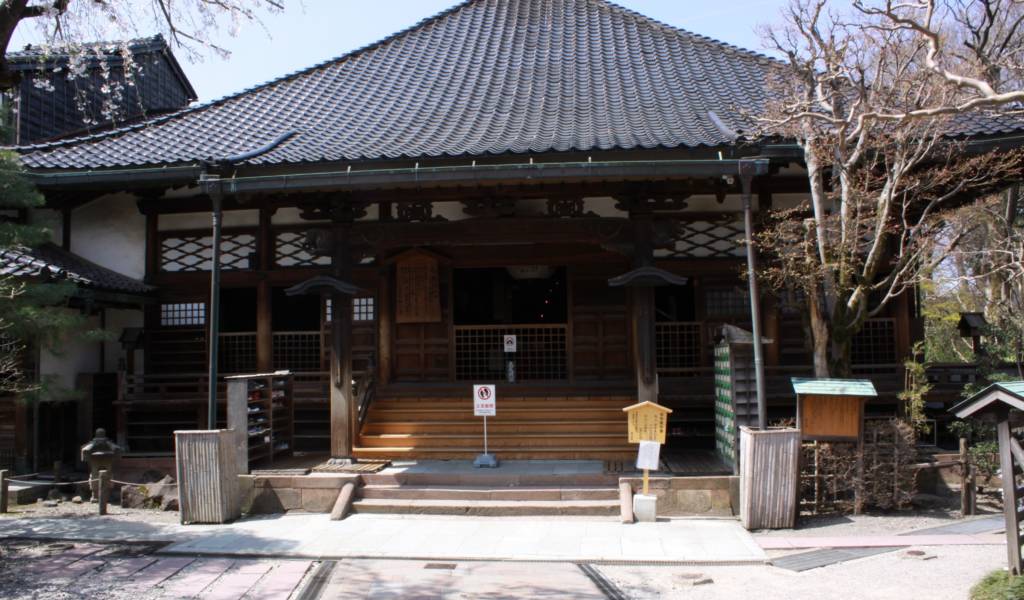 One of Kanazawa’s most popular attractions, Myoryuji is a Buddhist temple that was built with numerous hidden passages, secret staircases and other ingenious features to protect the temple guests and guardians.

“Ninja Temple” is actually a misnomer as the temple had absolutely nothing to do with Ninja. Rather, it was a secret place of worship and retreat for the ruling Maeda clan who ruled the Kaga Domain with Kanazawa at its center. All the hidden doors, rooms, staircases and hallways served as protection in the case of attack. When the temple was built, the Tokugawa shogunate only allowed buildings to be two stories high. Myoryuji is actually 4 stories high, so the upper stories were ingeniously hidden. Descending from the third to the second floor, there is a tiny room that was designed specifically if the Maeda Daimyo needed to commit seppuku ritual suicide. Luckily, the room was never required for its intended purpose. If the temple had been under attack and the room had been used, the temple presumably would have been razed to the ground.

Photography within the temple is strictly prohibited, so you’ll just have to experience it in real time!

Visitors need to call in advance by telephone to make a reservation for the tour. You can’t reserve over the internet, and the receptionist may only speak Japanese so you might need to rope-in your hotel concierge or your Airbnb host. Also, the tour is given in Japanese. The temple staff will supply visitors who don’t speak Japanese with a folder containing English explanations. No photography is allowed inside the temple and children under elementary school age are not permitted for safety reasons.

Getting to the Ninja Temple

The temple is a brisk ten-minute walk from the central Kohrinbo district. If you’re getting around by bus, get off at stop number 11 (Hirokoji Ozakura-mae) on the Kanazawa Right Loop Bus and stop number 5 (Hirokoji Tera-machi Temple Area, Nishi Chaya District) on the Kanazawa Left Loop Bus. If arriving by car, the nearest parking is at Gokuraku-ji Temple – a short walk from Myoryu-ji.

Note that the Ninja Temple makes absolutely no allowance for anyone with mobility issues. There is no allowance for wheelchairs or strollers and staircases are steep and narrow with low ceilings. This 178cm tall writer crashed his head into overhead beams twice during the tour.

Cash only
No parking
Official site