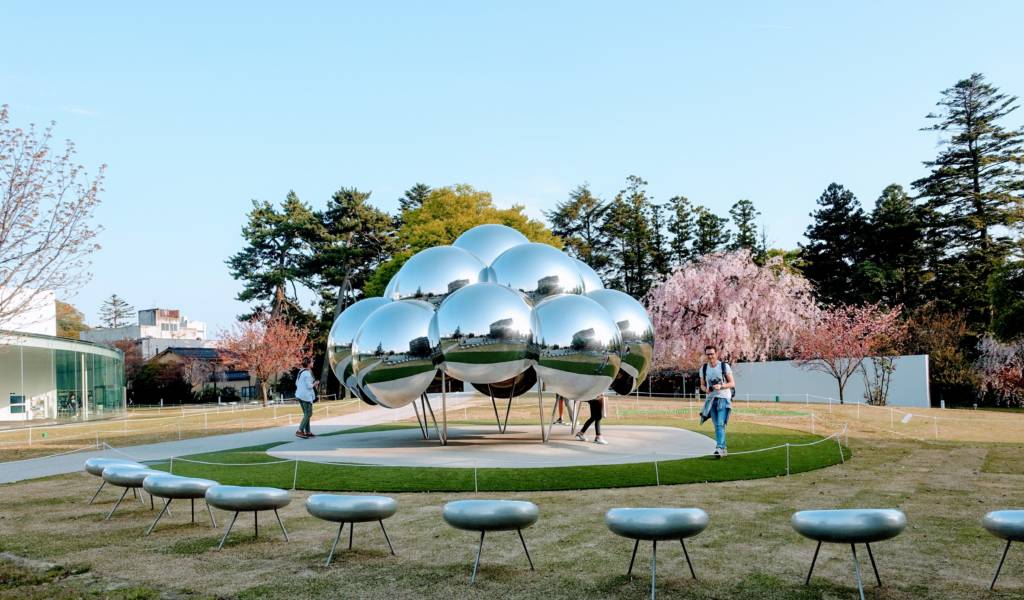 Gold Leaf and Geisha: Top 10 Things to See in Kanazawa

Quieter than Kyoto and offering a similar traditional feel, Kanazawa is quite literally a treasure trove of traditional Japanese experiences—and a nice shiny gold one at that.

A popular stop-off for those on a JR Pass, Kanazawa has all the charm of Kyoto and none of the crowds (well, almost). Meaning “marsh of gold”, Kanazawa is known for producing almost all of Japan’s gold leaf—and you’ll see plenty wherever you wander. With heavy snow during the winter months and hot humid days in summer, plus a reputation for rain, the city adapts throughout the year. The top sights, however, don’t really change, they just take on a different feel with each season. Whether you prefer the pink hues of cherry blossom, the clean whites of winter or the warm glows of autumn, Kanazawa offers a stunning mini-break with plenty of things to do.

The history of Kanazawa

Kanazawa was once considered the key stronghold of the “Peasant’s Kingdom”—a reaction to the waning powers of Kyoto’s shogun in the Muromachi period. Set between two rivers, the area was an ideal stronghold and the castle town was overthrown and challenged over the centuries, falling under the reign of the Tokugawa Shogunate and later the Maeda Clan. With samurai, merchants and artisans, the town was a wealthy and successful base, with a strong focus on crafts and art. Today, the effects of that focus are still clear, with countless traditional crafts still going strong—from gold-leaf production to Kaga mizuhiki (decorative cord).

We have a full guide on getting around Kanazawa. You can choose between walking, renting city bikes (¥200 a day) or using the One Day Pass (¥500 a day), which is valid on the loop bus and the kenrokuen shuttle bus. For each site we’ve provided the bus stop names along with the ID for the bus route—the right loop (RL), the left loop (LL) and the shuttle (S)—where available.

Things to do in Kanazawa

A quick glance at our handy map will soon show that this is a small city with a few central sightseeing spots. You can easily travel between them by bike or bus – check out the transport guide baove..

1. Saunter through the chaya districts

The source of picturesque shots of Edo-era streets with traditional lanterns, the three tea districts are like traveling back in time. Filled with traditional tea houses, the streets are rare examples of well-preserved Edo architecture. Known as chaya, the teahouses historically received guests for evenings of entertainment by geiko (the regional word for geisha). The most popular spot is the Higashi Chaya District which is close to the Asano River.

While most of the teahouses have been turned into shops, or cafes, you can visit the carefully preserved Shima Teahouse and have tea in the famous Kaikaro Teahouse. Just across the river is the smaller Kazuemachi District and across town is the Nishi Chaya District, which has a small free museum and a few cafes. Read our full guide to the tea districts of Kanazawa.

2. Expand your mind at the Contemporary Art Museum

Offering a nice jump back into the present day, the 21st Century Museum of Contemporary Art is a showcase of both Japanese and international artists. Designed by renowned architectural firm SANAA, even the building is a work of art, with a round design lacking a main entrance. The museum is home to permanent installations like Leandro Erlich’s famous Swimming Pool and outdoor works like Fernando Romero’s LAR. Here, the explorations of contemporary creations are encouraged on a mental and physical level.

While many areas are free, there is a charge for entering the pool and special exhibition space which varies (but for reference was around ¥350 when we visited.

3. Step back in time in the samurai district

Called the Nagamachi neighborhood, the samurai district of Kanazawa is close to the castle and home to well-preserved buildings. As the base of all samurai families in the Kaga region, over three quaters of the city was made up of samurai residences in the 17th century. While many homes were sold off as wealth declined, there are still examples to visit in the area.

The Nomura Home belonged to one of the top-ranking families and has a beautiful garden to go with the preserved interiors. The Shinise Kinenkan Museum showcases the crafts of the area in an old pharmacy while the Ashigaru Shiryokan museum represents the lowly footsoldiers of the Samurai class. Check out our full guide to the Samurai side of Kanazawa.

4. Explore the castle and its grounds

Undergoing long-term reconstruction, Kanazawa-jo is an imposing and vast castle area with a large surrounding park. As with many castles in Japan, it has burned down on multiple occasions and the current structures are part of a reconstruction project that begun in the ’90s when the local university vacated the grounds. The long storehouse now showcases the traditional crafts used to restore traditional Japanese buildings and the turrets at either end offer great views across the city. You can also enter the main entrance gate (Kahokumon), which is free, and take a walk through the pretty Gyokusenninmaru Garden.

Proud creators of 99% of Japan’s gold leaf, Kanazawa certainly won’t let you forget it any time soon. From semi-terrifying gold facemasks to the much-instagrammed ice cream (no judgement, we did it too), the town is a haven for lovers of all things that glimmer. The Kanazawa Yasue Gold Leaf Museum is close to the Higashi Chaya District and is a small but worthwhile insight into the painstaking traditional methods of preparing the impossibly thin sheets of metal. The shops of the tea district are filled with plenty of golden souvenirs from glittering sake to hand cream to pottery, so you can take a tiny bit of it home with you. Since gold is edible, there are also plenty of gold-dusted treats to try including croquettes, unmeltable ice cream and even gold-flecked coffee. While this area has the most intense gold focus, you can find items throughout the city, as well as spotting the more traditional uses on shrines, temples and bridges.

There are some reat activities to try locally, including gold-leaf designs – read about theme in our guide.

One of the three great gardens of Japan (known as the Nihon Sanmeien), Kenrokuen used to be part of the castle grounds, but is now a separate area. With plum, cherry and maple trees as well as seasonal flowers, the garden is considered uniquely beautiful in each season. Meaning “garden of six sublimities”, it reflects space, seclusion, antiquity, ample water and broad views as well as seclusion—all converging to form the perfect garden. The many ponds and streams are filled using water from nearby rivers using ancient diversion systems and the garden is also home to the oldest fountain in the country. The large Kotojitoro lantern, protective snow-coverings and aged trees are some of the most recognizable features of the garden, along with the Meiji monument. Make sure to use the Katsurazaka entrance, especially in spring—the shop-lined walkway is a picturesque spot to have a drink or ice cream along the way.

7. Try not to be tricked at the Ninja Temple

Officially known as Myouryuji and unoficially as Ninja-dera, this temple is known for its secret trapdoors and hidden passages. Built by the Maeda lords in the Edo period, the temple wasn’t used by ninjas, but has enough sneaky tricks up its sleeves to make the association. At the time, strict building regulations were used to control feudal lords and this temple was given confusing staircases, secret rooms and trapdoors to enable its use as a military defense.

Tours are required for the temple and can either be booked in advance by phone or at the temple on the day (although they may fill up). There are plenty of other unusual museums in Kanazawa – check out our top picks of niche ideas.

While that gold-leaf ice cream gets all the attention, Kanazawa’s local cuisine is known as Kaga ryori. Focused on local vegetables and seafood and often served on locally made kutani-porcelain, the cuisine is simple, filling and delicious. One of the most popular dishes is jibuni—a dish with duck coated with gluten (better than it sounds) and simmered in a tasty broth. For a lighter dish you can try Kaga-renkon—the local lotus root which is minced and steamed with fish, shrimp and veg in a thick sauce. For a perfect drinking snack, be sure to try gori-kaga-age which are small deep-fried freshwater fish sprinkled with salt.

Here are some ideas on where to try Kaga ryori in the city and our top restaurants overall. Or for alternative dining options, check out our guide to vegan and vegetarian restaurants in Kanazawa. If you need a drink to follow your meal, then we have a few suggestions for local craft beer spots too.

9. Spend an evening with geisha

If you’re keen to experience some geisha/geiko entertainment, then there are a few opportunities in Kanazawa. While you wander through the districts you may well hear some shamisen practice or singing filter out from the windows of teahouses (we did!), but spotting an actual dressed geisha is unusual. The previously mentioned Kaikaro Teahouse holds geisha evenings twice a year, with tickets ranging from ¥4,500 to ¥10,000 depending on how close you want to be. Lasting around 90 minutes, the evening an introduction from the landlady, an explanation of the culture and then musical performances and parlor games with the geisha.

Tickets are available online or on the day at the teahouse (but they sell out pretty fast of course). If you’re not there during the performances, you can still have tea at the teahouse.

A mini-version of Kyoto’s famous Nishiki Market, Omicho is a fully functioning fresh market with a large fish and seafood section as well as veg and street food. The stalls serve visitors and locals alike and is a great place to pick up the freshest seafood if you’re able to cook (a great bonus if you opted for an Airbnb).

There are stalls serving skewers, croquettes, grilled fish and countless treats as well as souvenirs but “snacking while walking” isn’t really encouraged, so take advantage of the little seats near most vendors. Also note that some stalls have a no-photo policy, so be sure to respect that, and if you’re taking photos of specific stalls do ask permission in advance.

If you find yourself in Kanazawa on a rainy day fear not! We have some easy ideas to keep you entertained and dry at the same time.

If you’re considering travelling to Kanazawa from Tokyo, there are some very easy options to choose from. The golden city is only a couple of hours away on the bullet train while there are night bus options available (including some from Willer that combine travel and a hotel) for those with more time than money. There are flights from Tokyo too, but they land in Komatsu City – so a train is more convenient (and eco-friendly!) For a full run-down of the options check out our full guide.