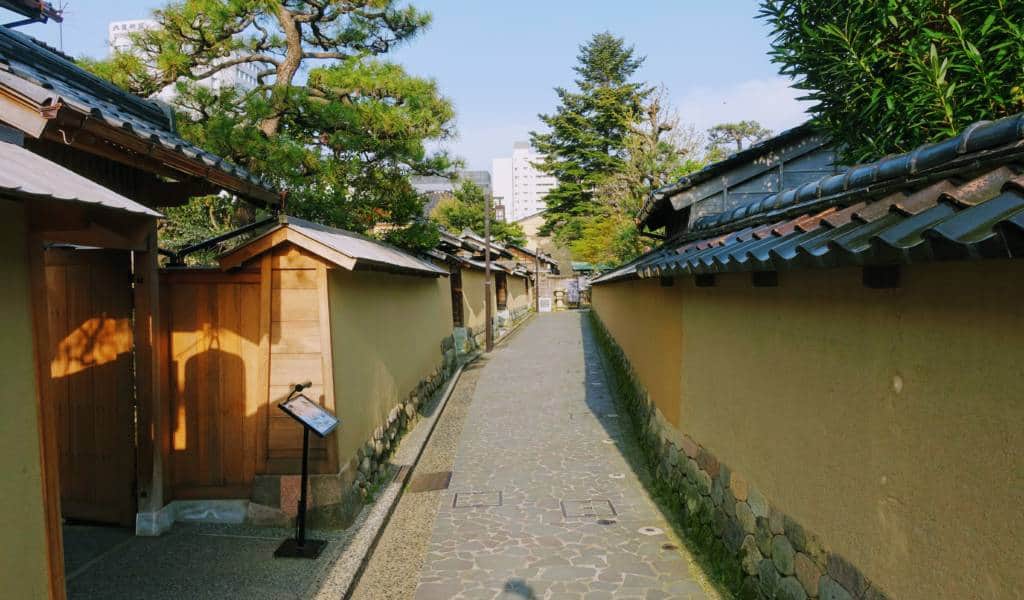 Not as famous as the tea districts but just as fascinating, the Samurai District of Kanazawa shows a different side to the city’s past. Once at the foot of Kanazawa Castle, the moat-lined Nagamachi neighborhood was the hub of city security. The earthern walls, paved streets and weathered gates all indicate the area’s role in protecting the city, with the homes of mid- and high-ranking samurai kept safely within.

The area is now home to museums, restored bukeyashiki (samurai houses) and carefully maintained streets, so it’s perfect for an exploratory stroll back into the Edo period. Aside from strolling through the winding streets, you can head to some of the area’s museums to learn a little more about samurai life. There’s a great combination of free restored buildings, traditional museums and some charming restored pharmacies (yes we’re talking about you, Shinise Kinenkan).

Long and convoluted, Japan’s historical ties with samurai stretch back across centuries, featuring high times as respected leaders and pretty serious lows ending in the abolishment of the class altogether. Starting as warriors in the Heian period, samurai prospered during the warring eras in the 15th and 16th centuries and were placed at the top of the food chain when the country reunited in the Edo period.

Living through peaceful times and needing battle skills less and less, they turned to politics and the arts until the feudal era came to an end in 1868 with the start of the Meiji era. Many samurai families lost their homes and plenty were sold off and demolished, meaning the rare examples in the Nagamachi district are a sight worth savoring.

One of the highlights of the area is the variety of homes and buildings on show. There are the high-class samurai homes, like the Nomura Clan, and the low-ranking ashigaru, or foot soldiers. A key sign in working out the ranking of the inhabitants of samurai homes is the borders. For example, the middle and upper classes had earthern walls, while the lower classes had hedges. Keep an eye out for the different rankings in the homes: the hierarchical system is still strong in Japan, but was all-defining in the days of the samurai, determining every aspect of a soldier’s life.

A two-floor exhibition space with a zero-tolerance policy on photography, this is one of the more museum-y museums of the district. While it can seem a bit dry, it has two very impressive sets of samurai armor, including one decorated with silver rabbit ears to highlight the cunning needed in battle. Most displays contain historical articles and texts, primarily focusing on the Maeda family who were the region’s ruling power for over 300 years.

Probably the most charming museum in Kanazawa (it’s a close tie with the Phonograph Museum), this is a delightful must-visit for the Samurai district. Trade in your ¥100 for a cute toothpick origami gift and proceed to enjoy the pharmacy display and beautiful crafts exhibited throughout the museum. A shop during the Edo period, the exhibit offers an insight into the merchant life in Kanazawa. The space also boasts a tearoom, garden, seasonal displays, masks, temari balls and a tree made entirely of sugar—¥100 well spent we think.

Information is available in English and Japanese. Learn more about the museum here.

Hours: 9:30 am–5 pm (last entry at 4:30 pm)
Entry: ¥100 for adults, free for high school students and younger. It is included in the Kanazawa Cultural Passport discount card.

The prettiest museum in town, this carefully restored home is technically a ruin, but don’t let that put you off. It gained its unfortunate listing due to changes carried out by a previous owner, but is actually a beautifully restored samurai home which once belonged to the Nomuras, a high-ranking samurai family. Today, the house holds a collection of artifacts and items from the past, including a set of armor, carved sliding doors, katana blades, and even a letter from a feudal lord offering thanks for the presentation of his enemy’s head by Nomura himself.

The highlight is quite likely the garden, however, which was designed to be seen from a variety of angles in and outside of the home. You can enjoy a cup of green tea on the second floor if you want to enjoy the view a little longer.

Not a major site but a nice detour, the Takada Ruins are a lot more ruined than the Nomura house. Mostly a strolling garden with the remains of the stables, the grounds feature simple displays about how the spaces were used.

The lowest of the samurai rankings, the foot soldiers, known as ashigaru, are commemorated here. Small and free, the museum has two reconstructed houses once owned by the Shimizu and Takanishi families with interesting displays about their lives. Unlike many areas where foot soldiers lived in terraces, in Kanazawa they were given detached homes with gardens and often worked as messengers. One of the homes was lived in until 1994 before it was moved to this site.

Still looking for more samurai stuff? The city’s largest museum is a little closer to the castle: the Kaga Honda Museum. Tracing the history of samurai family the Hondas, it is connected to the Ishikawa Prefectural History Museum and offers a deep dive into samurai life. An absolute wealth of museums, be sure to give our Kanazawa museum trail a read if you’re into the history side of sightseeing!