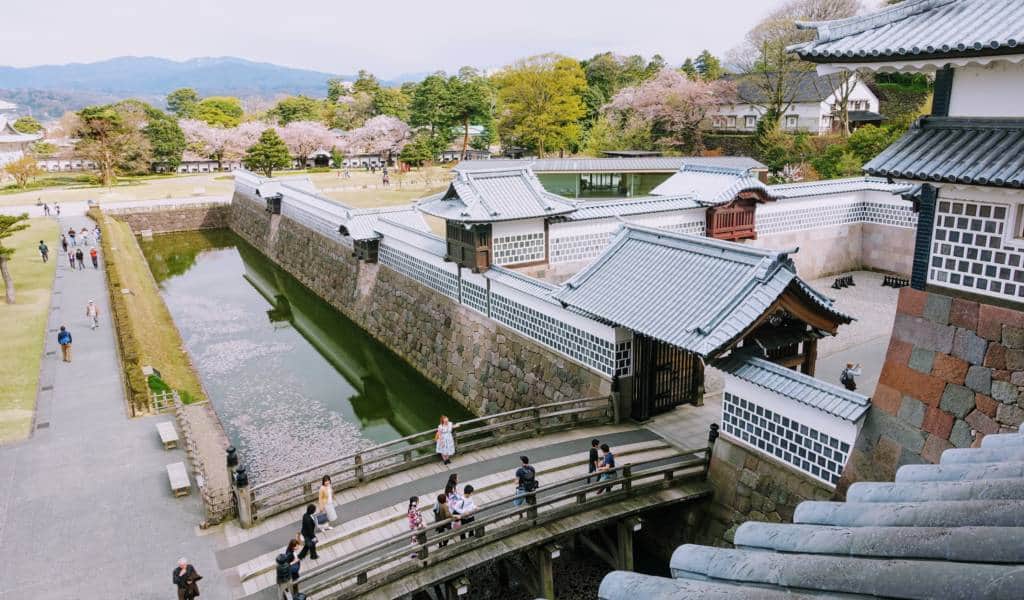 Located on the highest point in Kanazawa between the Sai and Asano rivers, Kanazawa Castle was the base of the powerful Maeda clan who ruled over the Kaga domain (most of modern day Ishikawa Prefecture) for 13 generations and almost 300 years.

While some older structures remain (such as the Ishikawa Gate built in 1788) much of the rest was destroyed by fires which swept through in 1603, 1631, 1759 and again in 1881. The current towers and connecting hall was reconstructed using traditional carpentry techniques starting in the year 2001. As such, it is the largest wooden castle built in Japan since the Meiji period (many of the other reconstructions are reinforced concrete replicas).

The castle is wheelchair accessible with modern elevators (there are some modern allowances) except for the yagura (towers) at each end which can be reached via perilously steep stairs.

The two turrets provide great views of the city and the mountain ranges to the east.

There is a joint ticket for the castle which also provides access to the neighboring Kenrokuen Garden for a ¥100 saving.

How to get to Kanazawa Castle

As with the adjacent Kenrokuen Garden, Kanazawa Castle can be reached on foot from the central Kohrinbo neighborhood in about 15 minutes.

If you want to grab a bus from Kanazawa Station to the castle, you can catch either the Kenrokuen Shuttle or the Kanazawa Loop Buses. The Kanazawa Loop Bus runs in two directions – both of which will get you to Kanazawa Castle. The “Right Loop” bus (clockwise direction) should get you there slightly quicker than the “Left Loop” bus. All buses (including regular municipal Hokutetsu buses) can be boarded at the Kanazawa East Gate Bus Terminal. Stops convenient to the castle are the same as those for Kenrokuen – RL7, LL9 and S8 (the letters stand for Right Loop, Left Loop and Shuttle respectively.) The fare for a single trip on any of the sightseeing buses is ¥200 for Adults and ¥100 for children.

Another option is using a share cycle. Depending on your speed, you can get to Kanazawa Castle in about 20 minutes. Docking stations can be found on your phone’s map app.

Read more about how to get around Kanazawa.