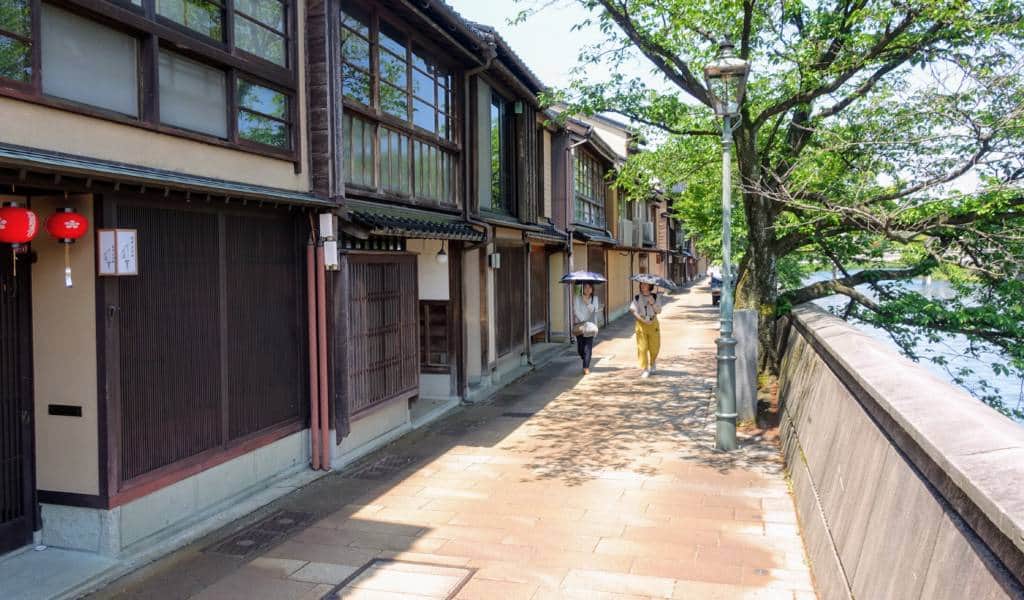 Less about tea and more about geisha, the chaya (teahouses) of the Edo era were a place for late nights, entertainment and fun. Kanazawa has three of these intriguing districts carefully preserved, with paved streets, wooden fronts and the delicate sound of shamisen practice drifting from open windows (that genuinely does happen, especially in Nishi Chaya).

Often compared to Kyoto, Kanazawa has the old-school charm of the ancient capital with fewer crowds and more tea. If you’re planning on exploring this alternative city, one of the best places to start is with its tea districts. While the largest is Higashi Chayagai, the neighboring Kazuemachi and not-so-neighboring Nishi Chayagai have their own quieter charms. Keep an eye out for the unusual museums which showcase the local crafts and explore alleyways filled with shops. And be sure to take a tea break at one of the many, many Kanazawa tea shops.

Frequented by wealthy merchants and noble Kanazawa residents, the Higashi Chaya district is the largest in the city and by far the most popular. Established 200 years ago (exactly, as luck would have it, in 1820), the area has been preserved with meticulous care. It’s maintained the traditional atmosphere, but kept the area vibrant and busy with shops, cafes and plenty of gold leaf.

Just north of the area is the Utatsuyama Temple area, with a series of small temple buildings dotted throughout. While simply strolling through the streets is a pleasant enough experience, (especially if you don’t mind being tempted into the glittering shops) here are some of the highlights:

A small but interesting museum, the Shima Ochaya was built in 1820 and maintained to show today’s visitors the secrets of geisha entertainers. While many of the area’s ochaya have been converted into shops and cafes, this one was saved and used to show the daily life of geisha and their working roles. Shima Teahouse features the owner’s living quarters, a small garden, a dressing room and the guest rooms. They’ve all been preserved as they were in the Edo period, with laquer, decorative scrolls and musical instruments.

The most well-known teahouse in the area, Kaikaro is still a working geisha house with evening entertainment. However, it opens its doors as a teahouse during the day. Beautifully maintained, the teahouse has tatami mats woven with gold, striking painted doors and a traditional sunken hearth. The evening geisha shows are by invitation only, but you can read more on finding a spot in our guide.

The Yasue Gold Leaf Museum is a straightforward museum detailing the process and history of gold-leaf production in Kanazawa. And it’s just around the corner from the quiet tea district. Decorating everything from Buddhist temples to cosmetics, gold leaf is everywhere in the city and beyond—with over 300 examples on display here.

If learning all about gold leaf has piqued your interest and you’re after an unusual souvenir, you can try your hand at crafting your own at Hakuichi’s workshop. The main store is a popular spot for the gold-leaf ice cream, but at a small side store a couple of streets away, you can master the art of applying your own gold leaf. From chopsticks to bowls, you can choose your item to decorate, with prices varying from ¥500 to ¥2,500. Reservations are required for the tea-district store (Asano) and can be made online (in Japanese, but Google Translate will do the trick).

All the strolling might well make you peckish, and there are plenty of treats to try nearby. Of course, the most famous is the gold-leaf ice cream, which is served by a few different spots, but most famously by Hakuichi. Costing a very specific ¥891, it’s not the cheapest soft serve you’ll see, but that is an entire sheet of gold leaf you’re getting there.

For a more savory flavor be sure to try the deliciously moreish potato croquettes (some with gold, some without) at nearby Ville de Croquette, or head to the many teahouses for a sit down and a cup of green tea or coffee. Kaikaro is a popular option, but Hayuwa offers better views of the streets below.

Access to Higashi Chayagai: From Kanazawa Station you can catch the Loop Bus to Hashiba-cho bus stop (RL4, LL10), or cycle on over to bike station #18. See our guide on how to get around Kanazawa.

Kazuemachi: A quiet corner beside the river

Across the Asano River, the Kazuemachi district—far smaller and quieter than the others— is especially beautiful during cherry blossom season. Considered the most discrete of the districts, Kazuemachi feels much more closed in, with narrow streets and steep steps. It’s also home to high-end sushi restaurants and geisha training centers.

While the bright and open Higashi Chaya district has become a tourism hot spot, this area remains relatively untouched. In spring, the cobbled riverside path is shaded by blossoms, while in winter, it’s coated in snow and picturesque.

The narrow maze of alleys may lead you to the famous kuragari-zaka (dark slope) and akari-zaka (light slope) or the private print shop of renowned artist Clifton Karhu. Keep exploring and see what you can find.

Access to Kazuemachi: From Kanazawa Station catch the bus to the Hirokoji Bus Stop (RL11, LL5) or pedal your way to bike station #10.

On the other side of the small city, the Nishi Chayagai (meaning “west tea district”) is a quiet spot for a stroll. Only one street has been maintained with wooden houses and cobbled floors, but it’s a charmer nonetheless. Just beyond the Sai River, close to the Samurai district and the Ninja Temple, the street runs paralell to a small offshoot river. It is largely home to cafes and sweets shops, but has a couple of unusual museums too.

The eyecatching blue European-style building you will no doubt spot is a geisha-training house, so be sure to listen out for the sound of shamisen (a traditional string instrument) drifting through the air. We heard a few delicate songs and spotted a geisha reading beside the window, so be sure to keep an eye out.

Small and free, this local museum is focused on the history of the area as well as Japanese writer Shimada Seijiro. Located in a reproduced teahouse, the museum uses the second floor to exhibit geisha life, with preserved traditional guest rooms. (Note that most of the information is in Japanese.)

Potentially lovely or potentially terrifying depending on your feelings towards dolls, this museum has an impressive display of them. The variety of dolls—used by children and for celebratory displays across Japan—is pretty astounding. The dolls all don intricate expressions and ornate clothing. Unfortunately, entry to the museum is not covered on the city passes, but if you’re interested in the art of dolls, it’s well worth the entry price (plus you get a cup of green tea!).

Access to Nishi Chayagai:From the Station you can hop off the Loop Bus at Hashiba-cho bus stop (RL4, LL10), or cycle to bike station #17.