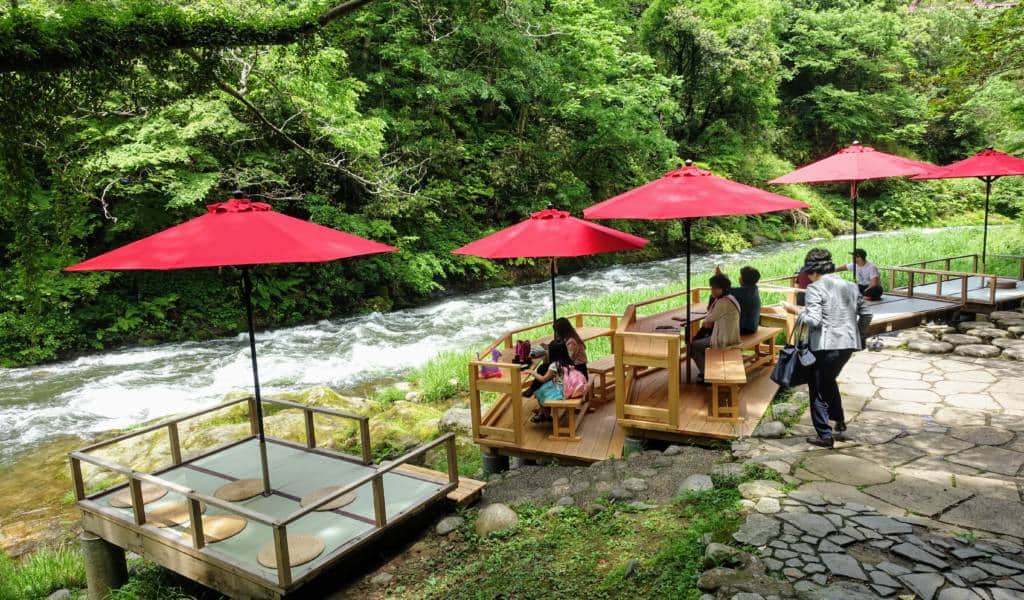 Kanazawa is surrounded by unique towns and onsen escapes, making the golden city the perfect base for exploring the local area. Just a hop, skip and a jump away, you’ll find tiered rice fields to admire, morning markets to browse and ancient onsen to soak in. Whether you travel by bus, train or car, our recommended day trips from Kanazawa are easily reached—and many have great discount passes too to make travel that much easier.

A very quiet town, Yuwaku is perfect for a relaxed day of walking, museums and coffee, with options for an overnight stay in a ryokan (traditional Japanese inn) as well. Enjoy a quiet stroll around to the ice house, and trek farther if you fancy a true hike and the very, very fresh air of the mountains.

There are two museums in the town that are covered by the Kanazawa City Cultural Pass—the Yumeiji Kaikan (very little English) and the outdoor museum Yuwaku Edomura. Showcasing homes from the area, the latter offers plenty to explore—and it’s an especially good outing if you have kids.

Next, walk up to the local glass-encased shrine, soak in the local onsen and enjoy the local specialty drink at Cafe Lente—it’s basically the perfect day! Check out our full guide to Yuwaku.

Getting from Kanazawa to Yuwaku

A 40-minute bus ride away, Yuwaku is easily reached from Kanazawa by public transport. Simply head to bus stop number 7 at the East Exit of Kanazawa Train Station (this is the side for local buses, while the west side is for highway buses) and catch one of the hourly buses. You can check the times here. Be sure to check the departing bus times when you arrive in Yuwaku to make sure you don’t miss the last one back!

The most modern of the four Kaga Onsen towns, Katayamazu has some incredible lakeside cycling options, a floating shrine, and some unusual contemporary baths to soak in. Holding claim to entertainment in the form of ice, hot springs and a lake, Katayamazu has all your water-needs covered. The city is the biggest on the list, but that just means easier to reach and plenty to see.

The lake has a fantastic (and very flat) cycling course around it, and the recently rebuilt onsen is perfect for a post-excercise soak. Be sure to stroll to Ukimido Temple which sits out on the water, with boat rides available from the nearby Yunomoto or Shibayama Kohan Park. The Museum of Snow and Ice is an odd one, but quite charming. It’s dedicated to the work of Dr. Ukichiro Nakaya who created the first ever artificial snowflake and was a well-respected snow specialist.

While Katayamazu is the closest of the four hot-spring villages from Kaga Onsen, it is also the last stop on the loop bus. That means it can take 70 minutes to reach. We suggest making stops along the way or catching a local bus instead, which only takes about 15 minutes. Kaga Onsen is a 27-minute train journey from Kanazawa, but if you drive you can get to Katayamazu in under 50 minutes.

The smallest of the local onsen towns, but with two very notable highlights, Awazu is well worth a stopover if you can manage it. Known across the region as one of the most unusual temples, Natadera Temple was carved into the rockface centuries ago. While you can’t follow the worn-down steps any longer, you can pass through cave entrances and follow shaded paths to find hidden bell towers, small shrines and a pagoda. The views of the temple are truly beautiful, with glossy ponds and red torii gates dotted along the rocks.

Nearby, there’s a car museum and a craft village, with cute bakeries and local restaurants. If you can, however, be sure to stay at Hoshi Ryokan—the second oldest hotel in the world. Offering a true traditional ryokan experience. The hotel was only beaten to the title by a few years and is a relaxing place to spend a night. Here’s our full guide to Awazu Onsen.

Awazu Onsen is on the CAN Bus Route which connects the four onsen villages that make up Kaga Onsen. Buses run seven times a day, and there are passes that last one or two days, with entry to some sightseeing spots included. The bus route starts and ends at Kaga Onsen Station, which is 27-minute train journey from Kanazawa. There are more details in the full-guide post linked above. If you’re driving, Awazu Onsen is just under an hour from Kanazawa.

Home to some of the most impressive hot springs on our list, Yamashiro is a small town with plenty to see. The area offers enough of a hike to justify an onsen soak (but really, who needs an excuse)—with an observation deck and temples along the route. Head to Rosanjin’s Iroha Soan for a cup of tea and some garden appreciation before heading on to the nearby Yakuoin Onsenji Temple. The steps behind the temple head to the Sazae-do observation deck, with moss-covered statues leading the way.

On your return, be sure to soak in the Ko-soyu Onsen, decked out with locally made tiles, located in the heart of the town square. You can sip tea in the resting area on the top floor, listening to the sounds of town life below. Just across is the modern Soyu, which has multiple baths and outdoor views. For more on what to do in Yamashiro, check out our complete guide.

Also on the CAN Bus Route, Yamashiro Onsen is only 15 minutes from the starting point of Kaga Onsen Station. If you’re spending a day in Yamashiro, you can catch the last bus of the day (the only one running in the reverse direction) at around 5 pm. If you’re driving, Yamashiro is an hour from Kanazawa, with some toll roads, which can be avoided if you’re trying to save cash.

A personal favorite of the towns mentioned, Yamanaka has a picturesque river running beside it, with a small cafe serving tea and cakes. The Yamanaka Gorge is an easy highlight for those who are craving some shady greenery or snowy views in winter. The common route is around 1 km and runs between the Kurotani and Kohrogi Bridge—although there are tempting offshoot paths to follow along it.

Within the town, however, are plenty of additional highlights that help you fill an afternoon with ease. The Yamanazaka Hall showcases cultural performances and lacquerware and is connected to the town’s public baths. Alongside a small and peaceful museum dedicated to the poet Basho, a large lacquerware museum and temples, there’s enough to keep you busy over an afternoon. Tempted? Read our full guide on what to see here.

Only half an hour from the starting point of Kaga Onsen, Yamanaka is one of the main stops on the CAN Bus Route. There are a few different stops in the town, so be sure to check the departure times of the one you intend to leave from, as they differ and buses are strict about departure times. For those driving, the town is a little over an hour from Kanazawa.

Heading up along the Noto Peninsula, you’ll find Wajima—town of local markets, rice fields and salt farms. Within the town you’ll find the popular daily market largely run by local women, with everything from fresh fish to handmade lacquer items. Nearby is the craft display houses which showcase artisans at work—plus a free footbath! The Kiriko Hall Museum displays the incredible lanterns used in the town’s annual festival while the Lacquerware Museum tells you everything you need to know about the skills involved.

Heading out of town, the Shiroyone Senmaida Rice Terraces are stunning at sunset (in spring or when illuminated in winter) and the nearby salt farms are an insight into the traditional art of salt gathering. These two are a little trickier to reach by bus but totally manageable (we did it), although a car makes it much simpler.

There is no longer a train service on the Noto Peninsula, so you’ll have to stick to buses or cars for this trip. Luckily there are regular buses from Kanazawa Station, costing ¥2,260. You can purchase your ticket on the bus or at the ticket machine on the day. For those driving, Wajima is 1 hour and 45 minutes from Kanazawa.

7. Fukui: Zen temples, a castle and plenty of dinosaurs

Best know for its castle and dinosaur museum, Fukui is the capital of its eponymous prefecture and has some spectacular natural spots too. Maruoka Castle is one of Japan’s twelve original castles, having survived since the post-feudal ages when many were destroyed. The castle grounds house a small museum and park, which fills with hanami parties in April, with lantern-lit gardens.

Eiheiji is a large temple complex founded by Dogen in 1244 and is considered one of the most important in Japan. Alongside Sojiji Temple in Yokohama, it is head of the Soto Sect of Zen Buddhism. With over 70 buildings, it’s a fantastic place to stroll around—and is particularly popular for its autumn leaves.

By train, you can get to Fukui on the Thunderbird Express (or other express trains with less exciting names) which takes 45 minutes and costs ¥2,540 unreserved. Alternatively, the local train takes an hour and a half and costs ¥1,340. There is one JR bus that departs from Kanazawa Station each morning, taking an hour and a half and costing ¥1,200.

If you’re looking on what to do in Kanazawa itself, then check our top Kanazawa sights post, as well as how to get to Kanazawa from Tokyo.