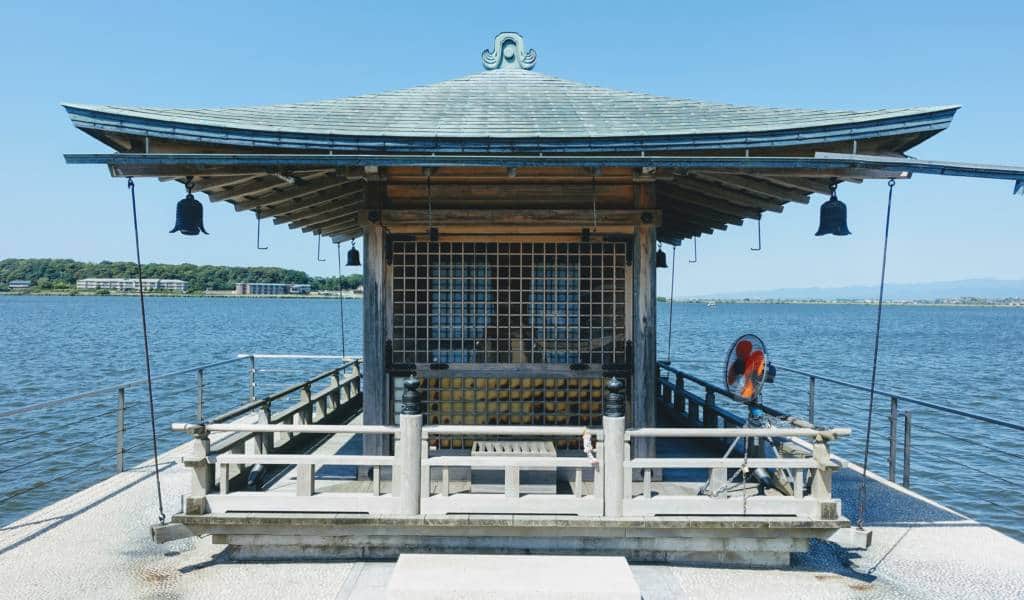 Perched on the corner of Lake Shibayama, Katayamazu Onsen in Ishikawa Prefecture is a modern town with traditional charm and some of the snazziest hot springs around.

Forming one of the four Kaga Onsen towns along with Awazu, Yamashiro and Yamanaka, Katayamazu Onsen is known for its hot springs and is a major stop on the CAN sightseeing bus route—and with good reason. While it isn’t as traditional as the other towns, it has some great spots and offers a more contemporary side to the hot spring culture of Japan.

An unusual blend of old and new, Katayamazu has a definite water theme, be it hot and steamy, frozen or just placid with the potential for boat cruises. The most immediately visible is Lake Shibayama, said to change color seven times during the day and offering calm reflections of Mt. Haku on the opposite shore.

The town was originally visited by feudal lord Maeda Toshiaki to practice falconry (as you do) back in the mid-17th century, who discovered a hot spring beneath the lake by observing the local birds. Nearly two hundred years later, an artificial island was built and the spring was finally accessed, transforming the town into a hot spring destination.

Museum of Snow and Ice

If you thought there wasn’t much to learn about snow and ice then good lord were you wrong—and this museum is here to make that very, very clear. Opened in honor of Katayamazu native and snow specialist Dr. Ukichiro Nakaya, this museum is actually pretty cool (#sorrynotsorry). While at Sapporo University, Nakaya created the first ever artificial snowflake—millenials, you are welcome. There are all kinds of technology on display, and while you may not have been sure why you went, the views from the roof will make you glad you did.

Museum of Snow and Ice

These hot springs were only finished in 2012 and have two different baths which are rotated between male and female each day. One option is the Forest Springs with views of trees and iris flowers (in season), while the other is known as the Lagoon Springs and looks out across the lake to Mt. Haku. The water here is known for being rich in sodium and calcium chloride, so its perfect for keeping you warm long after you leave the waters (“How” you ask? Who knows, but it’s definitely nice).

Above the baths is the cafe, which serves a simple menu of hot drinks, daily specials and cakes that are perfect for a post-soak relax.The impressive building was designed by renowned architect Yoshio Taniguchi who is best known for the Tokyo National Museum, Tokyo Sea Life Park and the Museum of Modern Art in New York.

If you’re keen to get out on the water, you can hop onto one of the pleasure boats for a trip around the lake. They run from April to late October (canceled in case of bad weather, of course). The boats schedule runs on:

A boat trip costs ¥800 and take half an hour. They depart at irregular times during the windows mentioned above, so just arrive at Yunomoto or Shibayama Kohan Park to await the next departure.

Alternatively, you can cycle around the lake on the special 7 km cycle path. It’s a flat trail and takes just under an hour, with swans to spot along the way as well as cherry blossoms in spring. You can see the lake’s giant water fountain, which reaches heights of 70 m and has daily shows on the hour between 7 am and 9:30 pm (with a few extra thrown in during the evening). Bikes are available to rent for three hours (¥500) from hotels in the town.

Balanced on the lake is the unusual Ukimido Temple, which is connected to the grounds of Yunomoto Park by a small bridge. The temple is dedicated to Benzaiten and Ryujin after the famous legend of their battle. Dragon king Ryujin was once a troublesome serpent terrorizing the town’s residents until Benzaiten transformed into a young woman and used her lute skills to charm him into a protective diety (and who said those recorder lessons wouldn’t pay off).

Just beside the floating temple is the unusual (and intensely named) Katayamazu Hot Springs Axis Square, in Sunabashiri Park. As a symbol of the hot spring focus of the town, the park’s axis is an intense pyramid-like structure, but beyond it is a very relaxing foot bath. Open to everyone and free to use, the footbath is perfect if you need to soak your feet with a view of the pond.

Originally located next to Kenrokuen Garden in Kanazawa, this small shrine was relocated in the late 19th century. The temple has a beautiful ossuary (used for the storage of bones) made from local cedar wood and filled with floral glass paintings. There is an unusual round community space attached to the temple, and the elevated platform has views across the small city.

Katayamazu Onsen is one of the primary destinations on the CANBUS Sea and Airport routes. The Sea loop bus service runs seven times a day and takes you to all the main sights and onsen towns of the area. Running between 9 am and 2:30 pm, the first six services go in one direction, while the seventh and final service of the day runs in reverse at around 4 pm. The Airport route goes from Kaga Station to the airport via Katayamazu and is the most direct option if you’re not planning on making sightseeing stops along the Sea route.

Katayamazu Onsen is technically only fifteen minutes from Kaga Onsen but that’s if you go direct. On the loop bus system it’s the final stop of the day, so we suggest making stops along the way, settling in for a 70-minute bus journey or using the Airport Liner to get there instead (five daily trips). There are four stops in the town itself as well as one for the Snow and Ice Museum and one for a nearby Sake Brewery Museum.