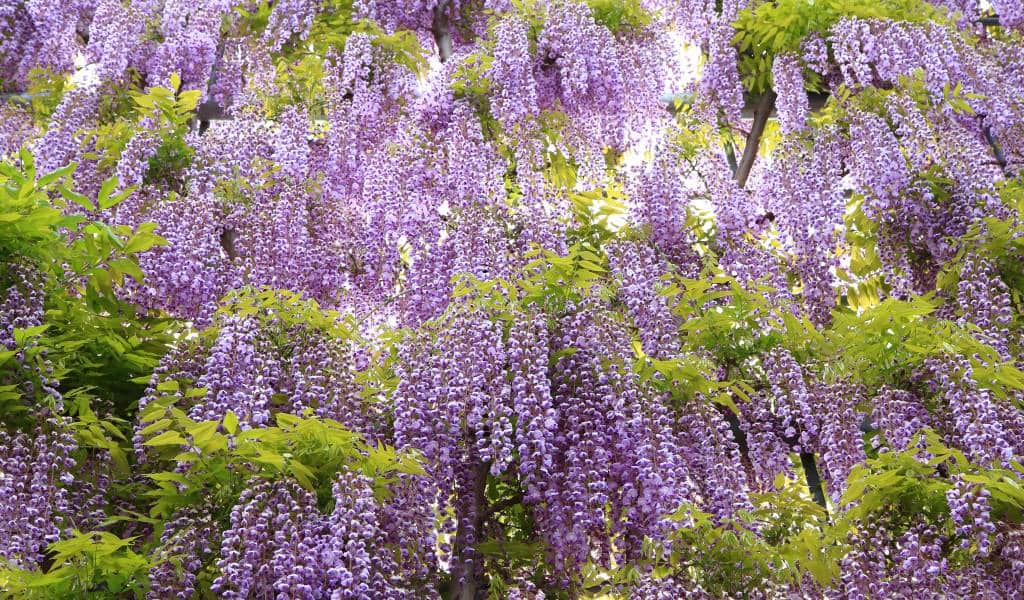 Pic: iStock.com/hirohito takada
Sharing
We are yet to confirm the dates and details of this event.

Ashikaga Flower Park’s annual Great Wisteria Festival is the place to see pretty purple wisteria — fuji-no-hana in Japanese — in all its glory. And also to see less common varieties in pink, white, and yellow. Basically it’s a really big park with A LOT of wisteria!

The biggest attraction is a 160-year-old plant whose canopy covers an astonishing 1000 sq. meters. Elsewhere, trellises create spectacular blossom tunnels — including one that is 80m-long and another that goes over a bridge. In the evenings, some of the wisteria are illuminated. It’s all very photogenic, as you can see.

The different varieties peak at different times during the festival:

Prices and opening times also vary slightly throughout the duration of the festival. From April 16th to April 22nd and again from May 9th to May 15th, the park is open 8am–8:30pm. Between April 23rd and May 8th, it’s open 7am–9pm. From May 16th to May 22nd the hours are 9am–4pm.

Evening illuminations will take place April 16th through May 15th.

If these dates don’t quite work out for you, have a look at some other flower festivals happening this spring.

How much does it cost?

Getting to the Ashikaga Great Wisteria Festival

Coming from Tokyo, you can reach Oyama via the Tohoku Shinkansen from Tokyo Station (40 minutes; ¥4,130) or from Ueno Station (35 minutes; ¥3,740). You can also take a Rapid Rabbit train on the JR Utsunomiya Line from Tokyo or Ueno, which does the journey in 80 minutes and costs ¥1,520. The Rapid Rabbit trains are for commuters though and only run in the early morning and evenings. Regular express trains, which run regularly, take an extra 15 minutes and cost the same.

These are just the most direct options; there are numerous ways to get to Oyama depending on where you’re coming from, but they will require transfer(s).

If that all sounds like too much, Tokyo’s best local wisteria display happens at Kameido Tenjin.