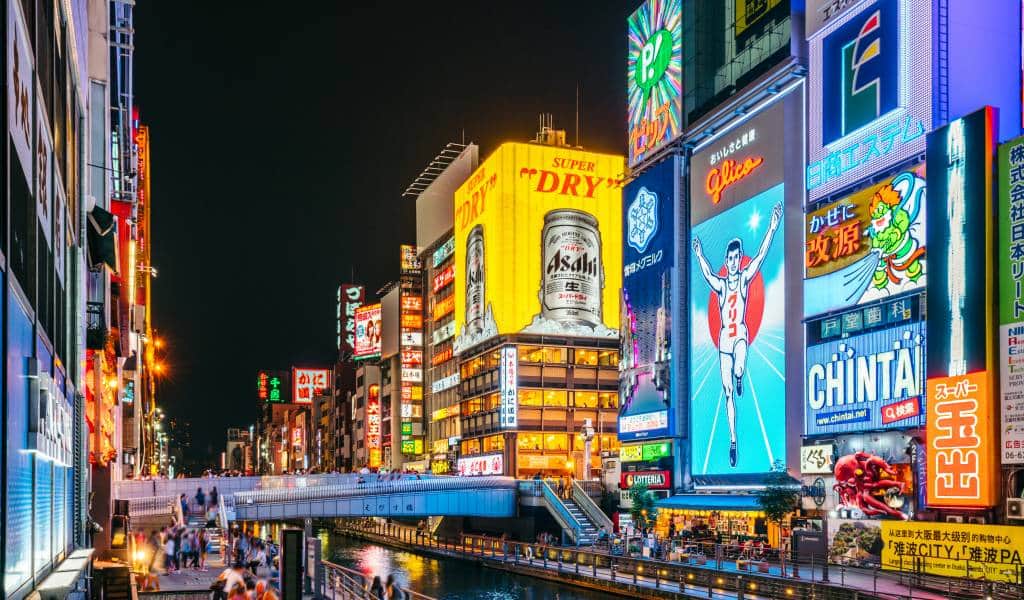 Bright neon lights, busy streets and giant 3D signs: if you recognize any part of Osaka, it’s going to be Dōtonbori. The designated entertainment district since 1662, it lives up to it’s reputation and is the place to head for the best food, best nightlife and everything in between.

Stretched between Ebisu Bridge and Nipponbashi Bridge, the canal was built by a local entrepreneur in 1612 to link the two branches of the Yokobori River and has gained quite a reputation since. An often overlooked city which misses out to Kyoto and Tokyo for those with a busy travel schedule, Osaka should be high on the list, and Dōtonbori the first stop.

Dōtonbori is a feast for the eyes before you even start on the food, so head out for a wander to see some of the hard-to-miss and harder-to-find spots that make this part of town such a brilliant place to explore before you fill up on food!

Best at night, the illuminated signs along the river, particularly at the central Ebisu Bridge border on overwhelming. The famous Running Man of Glico candy sprints across from a giant Asahi beer, marking this place as a great drinking spot. During the warm months, New Year and basically every weekend, the bridge is filled with revelers and is a great place to meet people, take photos and enjoy the street food. Known as Nanpa-bashi by foreigners as a great meeting place, it’s also earned the nickname Hikkake-bashi among locals: the pulling bridge.

If you stroll down along the river, you can get some breathing space and take a seat on some of the steps, enjoying the river’s reflections and views along the neon-lit strips. You can visit some of the clubs like Giraffe which offer good discounts for foreigners and girls, but beware of the occasionally odd closing hours).

A relic from the Broadway days of Dōtonbori, the small temple is hidden in the narrow back alleys and is more often stumbled upon than sought out. The moss-covered figure of Fudo Myoo was the only part to survive the WWII bombs, and is watered by those who pray, to ensure the moss remains.

The quiet temple can be found down a narrow yokocho (alleyway filled with tiny restaurants and izakaya), lit with lanterns and great for exploring. At less than three meters wide, the Hozenji yokocho is 80m long, with plenty of places to eat and drink, and plenty of people to meet. Damaged by fires in 2002 and 2003, the locals rallied and supported affected business owners, giving the area a new lease on life and a great sense of community.

The largest shopping area in Osaka, Shinsaibashi has everything you’ll ever need with almost 400 years of footfall to prove it. From the luxury stores of Mido-suji street which earned it the nickname of the Champs-Élysées of the East, it is also home to America-mura, an area filled with everything American and then some. Leading straight from the Ebisu Bridge, you can’t miss it—and on a rainy day the covered arcades offer a brilliant opportunity for souvenir shopping and unusual sights!

A few minutes stroll from the main strip, you will find yourself in Kuromon Market—a great place to try more food including sweet waffles and tempura along with all the fresh produce and deals you could want! Remember to look up and you’ll see some more giant creatures to help you find what you need!

As you wander the streets and enjoy the atmosphere, you might be stopped in your tracks by the somewhat horrifying sight of a mechanical clown, beating a drum and looming over you. Fear not, it’s not part of the latest clown craze—this is Kuidaore Taro. Installed in 1950 as the mascot for a once-giant restaurant which has since closed, he is now a popular attraction and has been moved along the street to a new spot. In the past, sumo wrestlers would gather for photos before a fight as good luck!

One of the most regal looking buildings and only meters away from the garish signs, the Shochizuka Theatre is home to traditional stage performances of kabuki. Renovated in 1997, it can now seat over 1000 people all with a great view of the country’s fastest revolving stage which also elevates to provide stunning performances. Between 3 and 5 shows are performed here each year including the biggest performance which takes place at New Year.

If Osaka is the kitchen of Japan, Dōtonbori is the chef’s table. With every specialty here, you’ll have to follow the old local adage of kuiadore: to ruin yourself through extravagant food—a saying inextricably linked with the city. You are said to dress until you drop in Kyoto, but eat until you drop in Osaka, and I know which I would rather do.

Most of the top restaurants are easy to spot, since you can see the giant figures and faces outside them, illuminated and slightly terrifying. It’s a great opportunity to try the local dishes as well as traditional Japanese food and enjoy picking your food by sign. While you may want to find a tiny back alley place to “eat with the locals” (and sometimes that’s great, don’t get me wrong), here, the big names are the best for a reason, and a chance to eat at them is what draws people from across the country—it’s all part of the fun.

Takoyaki on the streets

You don’t need to look hard to find takoyaki, the octopus-filled balls of batter. They will be flicked, cooked and served up all around you, with dancing bonito flakes topping the dark tare sauce and mayo combo. If the streets are too crowded, simply look up, and walk towards an octopus of your choosing—it’s pretty reliable in these cases to find one with a decent Japanese queue, and take the local’s word for it. Compared to elsewhere in Japan, takoyaki here is served quite soft, bordering on under-cooked—but it’s intentional, so enjoy! If you want to learn more about takoyaki and other Konamon dishes, head to the free museum above Kukuru to see the history, and even make your own takoyaki souvenir model.

Okonomiyaki: Two of the best

Grilled as you like, okonomiyaki is exactly what it says on the tin—and is perfect for personalizing, with countless options available to be added to your cabbage and batter mix. There are two great places to try in Dōtonbori both recognized by the Michelin guide and offering amazing okonomiyaki (but no crazy signs, sorry). The first is family-run Mizuno, which offers recommendations before your chosen mix is brought to the table and cooked in front of you. Ajinoya is nicknamed the second best in town, but this is up for debate—although there are often queues it’s definitely worth it, and ordering in line helps speed things up.

With giant dragons guarding both ends of the street, and one in the middle for good measure, Kinryu ramen have their bases covered. Serving a Kyushu-style tonkotsu (pork broth) ramen, they have a garlic, kimchi and pickle station where you can help yourself for free, before slurping as you stand, taking a table seat or sitting on the tatami mats. Since they’re open 24 hours a day—you can enjoy before going out, after, or both!

Kushikatsu: Food with a frown

These delicious golden skewers come with a golden rule: never, ever, double dip. A local delicacy, kushikatsu can be pretty much anything, from chicken to cheese to veg, all deep fried and dipped in a dark sweet sauce—they’re unsurprisingly a great match with beer. The most famous restaurant, Kushikatsu Daruma is identified by the grimacing face of Daruma, with a loudspeaker warning people against double-dipping. Prices start at 120 yen per stick, so you can pick and choose as you like. Make sure to pose with your best angry face outside before you enjoy your dinner!

The giant iconic arm-waving crab will be one of the first things you see on Dōtonbori, and beneath it is the famed Kanidouraku; a very high-quality crab restaurant. With the name sometimes translated to Crab Debauchery, you will see plenty of leg pulling, sucking and crunching—so grab a napkin. The restaurant is huge but reservations are advised if you want non-smoking, and remember matching socks—it’s a traditional restaurant seating style.

Zuboraya was a fugu restaurant, identified by the iconic giant blow fish suspended outside in perpetual inflation. A chain with over 100 years of history, it was focused on the South Osaka area, offering courses which included every part of the fish, including the no-longer-deadly part. While locals are investigating ways to preserve the giant fish in its current position, the COVID-19 pandemic downturn has sadly put Zuboraya out of business for good.

For some affordable sushi head to Genrokuzushi opposite the clown, beneath the giant hand. The founder is supposedly the inventor of conveyor-belt sushi having been inspired by the conveyor belts in beer factories, but even if that’s untrue, the sushi is 125 yen—so you can’t go too wrong!

If you’re in Osaka, check out our top ten list of things to do in the city!