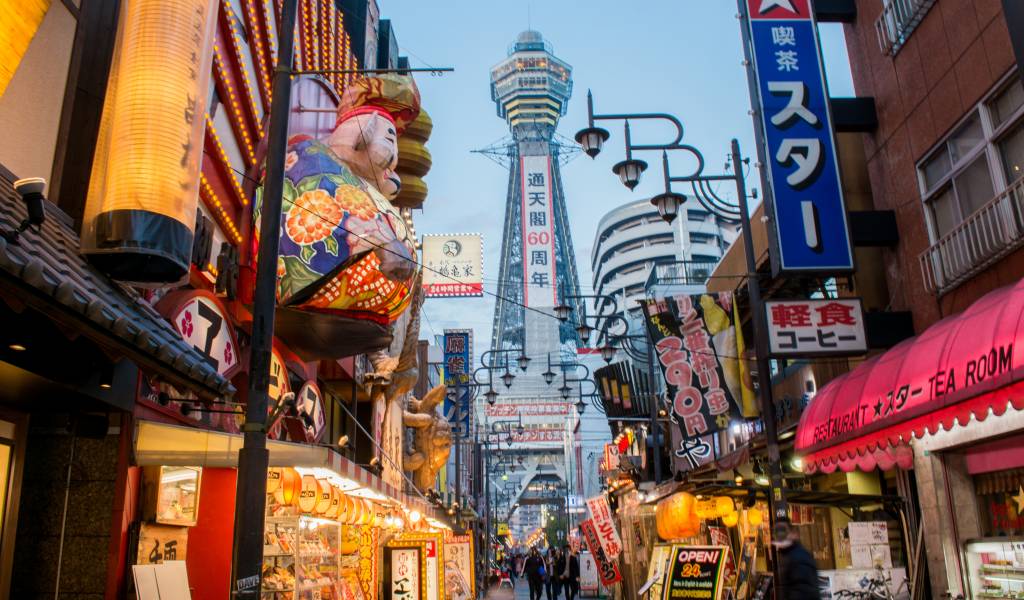 Troubled, scruffy and entirely enchanting, the streets of Shinsekai, Osaka were designed with the future in mind, but are full of the charm of years gone by.

Located across the park from Tennoji, it is home to kushikatsu, the iconic Tsutenkaku Tower and more traditional coffee shops than you can shake a stick at—but it still rarely makes the cut for most visitors to Osaka. While it may not be as well known as the famous Dotonbori or the traditional Shittenoji complex, it’s the perfect place to explore the older side of Osaka, although it was designed to be the future of the city.

A throwback to the 80s, there are no fast-food chains or convenience stores here, but there are plenty of independent shops run by families for generations. Take a stroll through the history and the streets of Shinsekai to learn about an area that encapsulates the forgotten side of a Japanese city often forgotten.

Pro tip: See the best of Shinsekai by booking a tour with a local guide.

The history on Shinsekai: Theme parks from the future

Designed in 1912, the north half of the city was modeled on New York and the south half on Paris, reflecting the growing interest in the influence of the West. It was the futuristic model of what cities should be, with the Tsutenkaku Tower becoming a focal point for progress as the highest tower in Asia at the time. Nearby, the Luna Park amusement area was constructed and was originally connected to the tower by an aerial tram. Tennoji Zoo opened in 1915 and the area flourished, with visitors traveling from across the Kansai region.

Unfortunately, it soon began to fade and the area was forgotten. The park closed in 1923 and the area was neglected, with the tower burning down in 1943 and the remaining steel being used for the war effort. As the area and its reputation deteriorated, there was a short boost following the war as a new tower was finally constructed in 1956, but no real investment to bring it back to the promising hub it had once been.

That reputation: The good, the bad and the sketchy

The area is unique: neglected for decades and considered the wrong side of Osaka’s neon tracks, it has become a home for those neglected by society. Today, like taking a trip back to the 80s, you can dine in restaurants handed down from generations past and enjoy the aged street decor, although most of the original buildings have long since disappeared.

The lack of regeneration is what gives the area its charm, but has also brought many of its problems. With a large community of day laborers who are largely homeless, it has attracted those seeking an anonymous existence. This includes the extreme example of murderer Tatsuya Ichihashi, who was eventually arrested after months in the city, but that goes to highlight the area’s problems.

There is a high level of prostitution and more crime than most areas and it is considered one of the most dangerous parts of Osaka (although keep in mind it is a dangerous area for a safe country, so you may be used to worse). Despite this, you might want to keep a closer eye on your stuff (and yourself) and watch where you wander at night. Generally, though, this reputation comes from the high level of organized crime that took place before the 90s.

Between your wanderings and explorations of the Shinesekai streets, there’s one must-try food that is forever linked to the area—and luckily it’s delicious as well. Kushikatsu is a simple dish—pieces of skewered meat, seafood and vegetables coated in batter and breadcrumbs and then fried, served with a special tonkatsu dipping sauce and fresh cabbage.

While it may not be the height of fine dining, it is a time-old tradition here and can be enjoyed at any of the countless standing fast-food-style counter restaurants or at some of the izakaya-style spots.

Meaning skewers (kushi) and deep fried cutlet (katsu), it is a great snack or fun meal as it goes very well with beer.  You can pick a place during your explorations or head to one of the more well-known spots.

The area is perfect for wandering, with alleys and shotengai (shopping streets) offering an insight into the more traditional daily life of Japan. Enjoy the old-fashioned adverts, sumo-themed restaurant walls and impressive graffiti that borders on art—often covering the rusted shutters. With pachinko parlors, coffee shops and vintage arcades, it’s easy to while away an afternoon. And there’s always Spa World if you want to soak away that city smoke…

The perfect place to explore, the shuttered stores of the old-school shopping arcades contain a whole world of old-fashioned entertainment. With pensioner-packed Mahjong cafes facing brightly colored fairground game stalls, it is an unusual combination of young and old.

The stores are a combination of barbershops, kissaten coffee shops and bargain stores, with fashion, health and everything else slotted in between.

The shutters are often covered in artistic graffiti and the signs look as if they have never been replaced, and they probably haven’t.

There are guesthouses and hostels, bars, a small cinema and kushikatsu spots too.

Plus pop-up shops, which are an example of amazing creativity; I once wandered into a shop devoted to an octogenarian’s carefully crafted images of jazz-inspired cats.

These streets are well worth exploring, but keep yourself alert if doing so in the evening, as there is that reputation to think of. You can easily find yourself in the red-light district and surrounded by some of the more desperate/drunk members of society.

Although we have covered a little of the history of this tower, it remains an important symbol of the area, but also of Osaka as a whole. The name means ‘building leading to heaven’ and was chosen by Fujisawa Nangaku, a Meiji-period Confucian.

Built in 1912 and based on the Eiffel Tower with a base designed after the Arc de Triumph, it was the tallest structure in Asia, but was not destined to last (see the black and white photo above). Burned and scrapped for the war effort, it was re-built in 1956 at 104m—nearly 40m taller than the original but without the impressive base. It has since been registered as a Tangible Cultural Property and has a variety of attractions within.

The basement holds WakuWaku Land—an entertainment area with souvenir shops and an area for performances and live bands. This is where you buy tickets and take the elevator up to the observatory and other floors which include: the Kinnikuman Museum and Jan Jan Town on the 2nd floor, the Luna Park display with dioramas on the 3rd floor, and observation area on the 4th floor. On the 5th floor is another observation deck, the statue of Billiken as well as the 7 deities of good fortune pilgrimage and the Billiken Shrine.

Originally located in Luna Park, Billiken is another reminder of Shinsekai’s golden times—quite literally. As the god of ‘Things as They Ought to Be’, he is a fitting figure for an area that has come to accept its place trapped in a time gone by.

Although resembling another traditional religious figure, he was originally invented by American teacher and illustrator Florence Pretz in 1908 after seeing the vision in a dream. A wooden statue was featured at Luna Park as a symbol of Americana, with popular souvenirs designed around him—but the statue went missing when the park closed in 1923. A replica was placed in the tower in 1980 and was even featured in a film where his return was used to restore the area to its previous levels of popularity. 4

The statue has since been on tour to Shibuya in temporary exchange for a statue of Hachiko, and St. Louis in Missouri (his traditional home) and was replaced with a new statue now residing on the 5th floor of the tower. There is also a gold replica on a corner right next to the statue.

For good luck, rub the feet and reap the rewards!

A pretty amazing way to spend a rainy afternoon in Osaka, Spa World is like an onsen theme park with two sections: an Asian zone and a European zone. Alternating each month, they are divided by gender but there’s also a mixed pool area where couples and friend can meet up.

There are themed pools in each zone, like the Finnish Sauna House and Grotto Azura, as well as the Persian Palace bath and a Bali-styled area. Don’t worry, there’s a Japanese outdoor bath and a cypress bath too if you’re keen to experience the Japanese onsen experience.

Water for the whole resort is sourced from a real natural hot spring—just with a few added stylistic extras.

Swimsuits are only worn in the mixed areas and traditional onsen etiquette is required throughout.

The park also has a no-tattoo policy. While subtle tattoos can be covered if you use plasters or carefully placed towels/hair (tried and tested), you may not want to risk it with larger ones as there are plenty of staff throughout the facility.

You’ll have a wristband after entry and can pay for drinks, massages and food with it—so keep an eye on your total!

Open with Maps
Written by: Lily Crossley-Baxter
Filed under: Things to Do
Tags:
Sharing