Kansai’s Hyogo Prefecture is a prefecture that runs along the Seto Inland Sea. For most people, it’s known for being home to Kobe and the Himeji Castle—and that’s about it. The castle is arguably the most stunning in Japan and one of the most beautiful in the world. But if you’re going to go all the way to Hyogo to check it out, it’d be a crime not to hang around a while and see what else this corner of Japan has to offer, which is a lot. Food, fun, and high-end designer fashion, here’s a side to Hyogo you need to get to know.

The area has a history with leather that stretches back 1,000 years. It’s a culture that hasn’t just influenced Hyogo, but has also made its mark on the high contemporary fashion scene. The Daisho Leather factory is a Hyogo institution, but you may not know by looking at it from the outside. Run by third generation leather maker and Daisho Leather CEO, Ogaki Masamichi, this factory is where the designers of Europe go when they need their hard-to-source animal hides.

By utilizing the good bacteria of the neighboring Ichikawa River, the leather producers here are able to create a unique white leather that’s near impossible to find elsewhere, which is one of the reasons Hyogo is a fashion capital. In terms of who from the high-end fashion scene is a customer of Daisho, Masamichi likes to remain a little more tight-lipped, but he did let slip that, “Hermès and Louis Vuitton have reached out and praised the quality of our work.” We’ll let you take that as you may.

If you’re crafty, the factory also has a leather store and workshop just a 10-minute stroll down the road. For more info check the website. 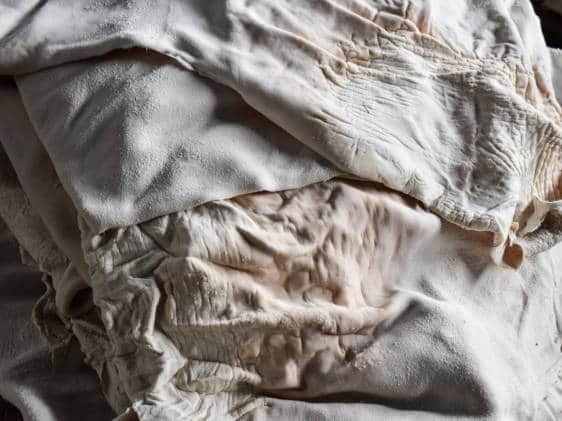 Nearby Osaka is a food-obsessed city, if you get a chance to visit the downtown neighborhood of Dotonbori, you’ll know what we mean. Rows and rows of snack stalls line the streets, continually billowing with smoke and steam and servicing a non-stop rotating cast of hungry passers-by. Although you’ll see more varieties of nibbles than you ever knew imaginable, the city’s number-one snack star is definitely takoyaki.

Takoyaki is essentially golf ball–sized balls of pan-fried dough filled with little pieces of octopus and coated in liberal layers of mayonnaise. They’re as delicious as they are ubiquitous. However, you may find it difficult to believe, but over in Hyogo’s Akashi City, they’ve crafted a local dish that’ll give takoyaki a run for its money. It’s known as akashiyaki and it’s a bit of a game changer. They look a little similar, but akashiyaki is made from a much eggier batter and dipped into a delicate but delicious dashi before being eaten. What makes it better is that it tastes a little lighter, a little less fried and it’s arguably much easier to eat in more copious amounts.

One of the best places to try akashiyaki is at Akashiyaki Wakasa in Akashi City. Located inside a shopping center on the second floor, it’s a little tricky to find, but worth the journey, so loosen those belt buckles and get hunting.

The ruins are the mystical remains of Takeda Castle located in Asago City. Initially built in 1411, the history books state that the castle was abandoned not long after the battle of Sekigahara in 1600.

Over its lifetime, the remains slowly disintegrated and were practically forgotten. During the 1970s and 80s, the area became a tourist site after the ruins were restored and both tourists and the people of the city realized the castle’s stunning beauty.

What makes these old ruins particularly special is that they’re known as the “castle floating in the sky.” That description may sound like a Studio Ghibli film, but during the moody autumn mornings, when the fog is thick and floating over the mountainous plateau, the site literally looks like a castle floating on a bed of clouds. If you’re a bit of a nature lover or a keen photographer, it’s truly one of the most spectacular sights in all of Hyogo.

To get a better view of the area before you leave, be sure to make the trip to the nearby Suma coastline to admire the stunning views of Kobe, Osaka, and the Seto Inland Sea. The best way to get the best vantage point in the area is by hopping aboard Kobe’s Sumaura Ropeway.

At the top of the ropeway’s 180 m-high incline you’ll see it all: Kobe, Osaka Asaki, and Great Naruto Bridge which connects Hyogo to Tokushima. While you’re up there take the time to explore the unintentionally retro-cute arcade and the family-friendly amusement park. For super fans of automobiles, you can always catch the ‘car-lator’ back down. A cross between a car and an escalator, (we think) it’s the only one of its kind in the world. And although it is cute, there’s probably never going to be a great demand for a second one elsewhere, so give it a go, it may be your only chance.