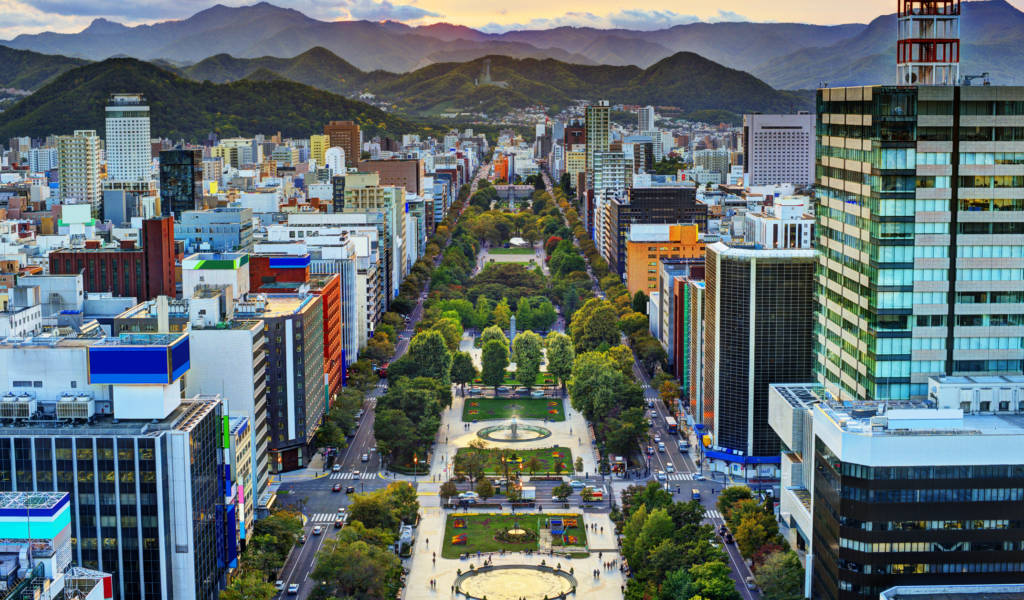 Sapporo is the capital and the largest city on Japan’s northernmost prefecture of Hokkaido. Come up north for good food and drinks, namely Japan’s freshest and tastiest seafood, delicious chocolate and craft beer, as well as a pretty town dotted with lots of green spaces and Meiji-era architecture. Start the day right at Asaichi, Sapporo’s fish market that rivals Tokyo’s Tsukiji Market (in its heyday) and end it right at the famous Ramen Alley for a bowl of Sapporo’s own creation, miso ramen. Come evening, head to Susukino, the nightlife district that never sleeps. Lastly, Hokkaido’s capital also recently developed a thriving art and design scene, which can be experienced by visiting its plentiful museums and galleries.

You can get to Sapporo by plane, ferry or theoretically a combination of bullet and local trains, although the latter would be rather lengthy and expensive.

Air is by far the fastest and often even cheapest way to get to Sapporo. If you snatch up a good deal, especially with one of the LCCs, tickets go for as little as ¥10,000 for a round trip. There are around 80 flights a day to Sapporo’s New Chitose Airport from Haneda and Narita in Tokyo–making it the second busiest air route in the world. You’ll get there in just 80 minutes and its quick and easy connection from the airport to the city. And be sure to read our New Chitose Airport to Sapporo guide—they’re not that close!

Another option for those with more time and maybe a sense of adventure is to board a ferry for Sapporo. There is no direct route from Tokyo, but from several other ports on Honshu, the main island, including Niigata, Oarai in Ibaraki Prefecture, Nagoya and Maizuru in Kyoto Prefecture. You will also be saving on a night of accommodation with the overnight trip and the ferries are quite luxurious, with comfy cabins and hot springs (sometimes even open-air) that let you see Japan from another angle. Most ferries take you into Otaru port, 30 minutes from Sapporo or Tomakai, a 60-minute train ride from the city. Check out the Japan Ferry Pass for a really good deal on six ferry trips across Japan for ¥21,000.

And while there is now a bullet train connection between the islands of Honshu and Hokkaido, it isn’t a good option for transfer between Tokyo and Sapporo. The Hokkaido Shinkansen only takes you up to Hakodate in southern Hokkaido in a bit more than 4 hours. For there, you would have to add at least an additional 3.5 hours on the Hokuto limited express train. The cost would also be around ¥27,000, making the air route the quicker and often cheaper option.

Read our full guide for all your Tokyo to Sapporo transportation options.

Sapporo is laid out on a rectangular grid, with most attractions in walking distance of each other. That means it’s a great city to explore on foot or by bicycle. At least in summer that is. From mid-October to mid-April, the city is covered in snow and temperatures can get extremely cold and additionally, some museums and other attractions are closed during the winter months. For the summer months, there are bicycle rental stations across from Sapporo Station as well as across the city usually near major sights.

For the colder months or longer distances, Sapporo is also covered by three subway lines, the JR line, a tramline and several bus routes, making it easy and convenient to get to most attractions. In addition, note that the Japan Rail Pass, Hokkaido Rail Pass and Hokkaido Free Pass are valid on the JR line and the buses operated by JR Hokkaido.

For much, much more, read our full guide to getting around in Sapporo.

Where to do and see in Sapporo

Get an insta-worthy photo with the clock tower, Sapporo’s most famous landmark before heading over to Nakajima Park, a surprisingly vast expanse of greenery in the middle of the city that is most beautiful during either the cherry blossom season or when the leaves change color. At dusk, take the ropeway up Mt. Moiwa for one of Japan’s most beautiful night views, encompassing both the Sea of Japan and Sapporo’s glittering lights. Continue your night in Susukino, Hokkaido’s nightlife district with a surprisingly wild reputation.

Foodies will enjoy the seafood at Asaichi Market that is best visited in the morning and at the famous Sapporo Ramen Alley, specializing in miso ramen, Hokkaido’s take on what is probably the world’s most popular noodle soup. Sapporo Art Park will impress those looking for something more refined and history geeks will thoroughly enjoy the Hokkaido Museum that explores the life and culture of its aboriginal inhabitants, the Ainu. A final stop at the Chocolate Museum or Saturdays Chocolate Factory lets you both indulge in another of Sapporo’s specialties and pick up some souvenirs before you leave the far North of Japan.

There’s also the annual Sapporo Snow Festival, which attracted close to 3 million visitors in 2019. Read our mega guide to planning for and making the most of your trip during festival time.

All Articles about Sapporo