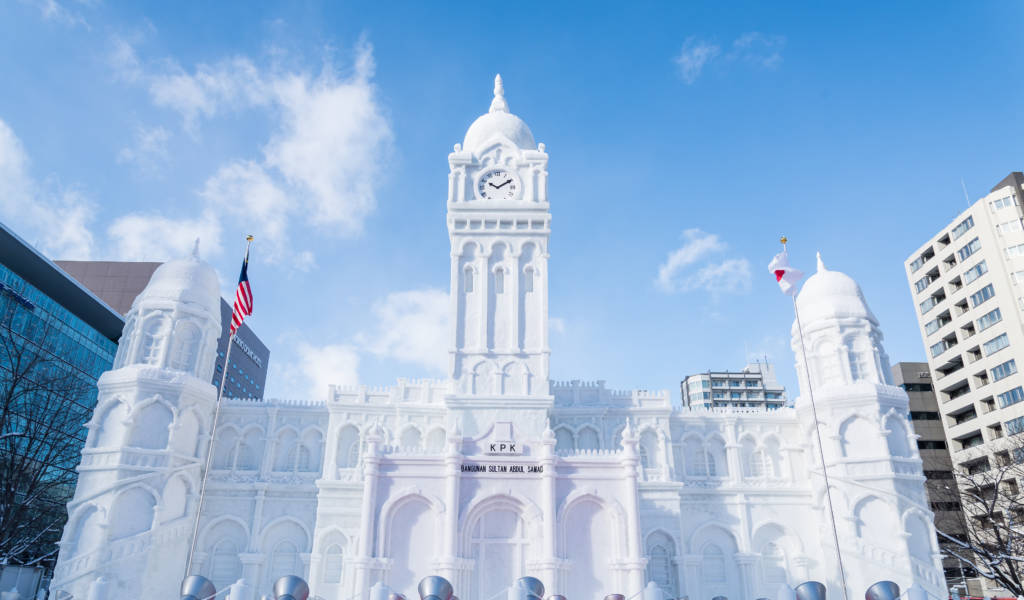 What’s cooler than being cool? The Sapporo Snow Festival!

Take yourself to a magical winter wonderland up in the cold north of Japan. This annual festival promises a bonanza of whimsical snow and ice sculptures — including life-sized buildings, and recreations of palaces, castles, and famous monuments. While you’re there, tuck into toasty, warming food, and get a real taste of Hokkaidō, Japan’s northernmost island.

The dates for the 73rd Sapporo Snow Festival are Saturday, February 4 to Saturday, February 11, 2023. There will be two sites this year — Ōdōri Park and Susukino. The Tsudome site has been canceled for 2023, as well as the International Snow Sculpture Contest and a number of food and drink stalls. Dates/scheduling may change at any time due to the situation with COVID-19, so be sure to check the official site for updates.

Ōdōri Park hosts the greatest number of sculptures, including the massive building-sized ones. Some are made by the Japanese Self-Defense Forces, while others are created by businesses, international groups, or artists.

In the Susukino district, known for its nightlife, there is a smaller display of more intricate ice sculptures amidst the host bars, karaoke places, and whiskey/highball counters.

The two sites are open 24 hours as they are places on public streets (though the lights will be turned off around 10 p.m. or 11 p.m. each night). All sites have extras, like souvenir shops, alongside the displays. Entrance to the festival is free, though of course food and souvenirs cost extra.

Pro tip: Book some other activities in Sapporo while you’re there. Or take advantage of JR Hokkaido’s rail passes and head out on your own.

What to know before you go

This is one of Japan’s most popular annual festivals — which also takes place in winter — so preparations are required!

Sapporo books out relatively quickly during this time, with around 2 million visitors coming to the festival annually (on a normal year). It’s best to score flights/train tickets and accommodation early if you want to attend at a reasonable price. We’ve listed some recommended hotels below.

Additionally, if you’re able to arrive a few days before the week begins or leave a few days after it ends, you may save on airfare. We recommend going early, if possible, since the sculptures are at their most beautiful at the beginning of the week; some of them can begin to look a bit melted and dirty by the end.

Layers! Baby, it’s cold outside! Don’t forget your gloves, mittens, hats, scarves, long johns/thermal underwear, thick warm socks, and boots with good tread. The ice can be forbidding, and if you’re not careful, you’ll soon be slip slidin’ away. Also pack or buy hokkairo (the little chemical hand warmer packets, or else the rechargeable type), tissues for runny noses, and pocket change for the various delicious street food snacks (canned coffee is never so delicious as in frozen Hokkaido).

Be aware that this festival happens in the dead of a Hokkaidō winter and heavy snow and blizzards are common. Make sure you arrive with some time to spare in case there are any delays.

The easiest way to get to Sapporo from Tokyo is to fly to Sapporo’s New Chitose Airport, which is 28 miles (45 km) outside of the city. The cheapest tickets tend to be on Airdo (rhymes with hairdo), Hokkaido’s low-cost carrier. There’s also Jetstar, another low-cost carrier, which also serves the city, in addition to the typically pricier legacy carriers ANA and JAL.

Check out our Tokyo to Sapporo travel article for more info on flying cheap, as well as our New Chitose Airport to Sapporo guide.

If you’re traveling with a lot of luggage, consider porting it from the airport to your accommodation to get right into the sightseeing.

Taking the train or ferry

It’s also possible to take the Shinkansen from Tokyo to Hakodate (Shin-Hakudate-Hokuto Station), and then take a limited express train onwards to Sapporo — the white-washed view out the window is spectacular. This is an expensive option, unless you take advantage of the Japan Rail Pass, or one of the regional passes from JR East that include travel to Hokkaidō.

If you fancy a spot of adventure, there’s an overnight ferry from Oarai in Ibaraki (north of Tokyo) to Tomakomai in Hokkaidō for as cheap as ¥9,000 one-way — although there’s a bit of a hike on either end to get from the port to the city, and the journey takes around 18 hours.

Where to stay for the Sapporo Snow Festival

There are lots of budget accommodation options in Sapporo, but be warned: rooms fill quickly during this season, so it’s best to act fast. For the young at heart, there are several hostels in town: Try Sapporo House Youth Hostel or The Stay Sapporo for a dorm bed starting around ¥3,550 a night.

For the less claustrophobic but more privacy inclined, get your own coffin-sized pod at a capsule hotel, which go for about the same price as a hostel. Two to check are Nikoh Refre (men only) and Safro (men and women ok). Both have big spa baths and saunas.

Getting around the city

Sapporo has a nice subway system and some charming street cars, but much of this city of 2 million is compact and walkable. In fact, unlike many Japanese cities, the streets are laid out in an easy-to-comprehend grid system, with block-shaped blocks and addresses like “North 2, West 6,” which correspond to the distance from Ōdōri Park and the Soseikawa Park.

In addition, much of the center of town can be walked underground in a vast network of tunnels, many of which double as shopping arcades and connect to the subway stations. In a city that has snow on the ground more than half the year, this just makes so much sense, but from up top you wouldn’t necessarily realize that so much of the city is subterranean.

For more details check out our guide to getting around Sapporo.

Be warned: If you must walk on the surface roads, they can be incredibly icy and slippery, and even the most surefooted may find themselves splayed on the roadside. The Sapporo Tourism Bureau even recommends that people buy ice cleats (suberidome) for their shoes, with an attachable pair available at local shops for around ¥500. You’ll also see what look like newspaper boxes filled with packets of rock salt, and citizens can help out by scattering this on the road as they cross.

What to eat in Sapporo

Hokkaidō is famous for its agriculture and supplies much of the rest of the country with vegetables, dairy, and other produce. You’ll find no shortage of delightful treats to warm your insides after braving the cold and crowds.

Local specialties include soup curry (vegetarian versions are available at many Indian restaurants), corn butter ramen, and super-fresh seafood, sushi, and crab — all washed down with Sapporo Beer or Nikka Whiskey, which are brewed locally. For a list of must-eats, see our Sapporo foodie guide.

Perhaps you’re one who likes to leave only footprints, and take only pictures, and if so, good for you. For the rest of us, there are several special souvenirs that you might want to tuck into your pack for the folks back home.

Hokkaidō is known for its famous sweets makers: Ishiya makes a popular cookie called Shiroi Koibito (“White Boyfriend”) that is made of a layer of white chocolate sandwiched between two thin butter cookies. Then there is Rokkaitei, which produces the famous Marusei Butter Sand, a sandwich cookie with a sweet butter filling studded with raisins. (The company also makes lots of other beautiful treats with lovely flowered packaging). Royce, meanwhile, makes fresh chocolates that are sought after not only in Japan but many other parts of Asia. These rich little truffle chocolate squares dusted with cocoa melt quickly in the mouth with an incredible velvet finish.

Finally, for those who want something that lasts a lot longer, Hokkaidō is also home to the Marimokkori character — a little man made from algae with a surprise in his trousers (NSFW) *cough* an erection *cough*. (A play on the words marimo, which means algae, and mokkori, which is slang for… well, you know.)

And for more fun, see our general sightseeing guide to Sapporo. Safe travels!

While we do our best to ensure that everything is correct, information is subject to change. Originally published in December, 2015. Last updated by staff writers in December 2022.