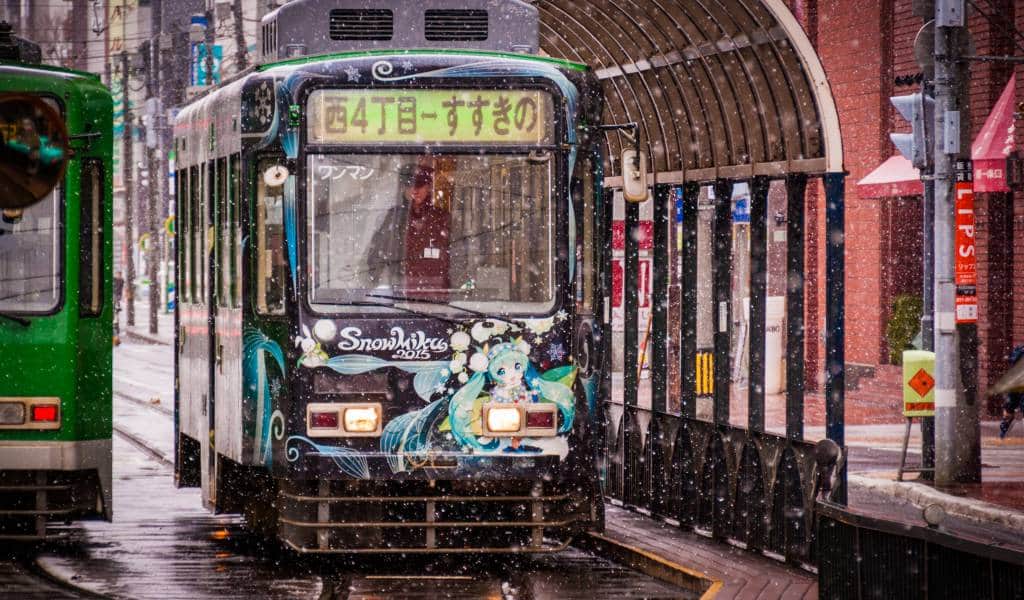 The Complete Guide to Getting Around in Sapporo

Sapporo, the capital of Hokkaido, is a large city. The odds are you will need to use Sapporo’s extensive transportation system to get from one tourist spot to another. This guide is a definitive look at all the ways you can travel around Sapporo.

The buses in Sapporo are, in our opinion, the easiest way to explore the city. While the subway is the most accessible, there are still a few attractions that can only be accessed via bus.

There are three companies operating in Sapporo: JR Hokkaido Bus, Hokkaido Chuo Bus, and Jotetsu Bus, and fares will vary depending on how far you travel.

All fares can be paid in cash or you can use an IC card such as PASMO, Suica, SAPICA, or Kitaca. Buses in Sapporo operate from approximately 06:30 to 23:30, although operational hours may change on weekends and public holidays.

Sapporo’s subway system is the most convenient form of transportation in Sapporo since a lot of the subway stations are situated close to many sightseeing spots. Plus there’s the added benefit of being underground so the subway isn’t as affected by snow in the winter months compared to the above ground trains.

(Note: buses and taxis in Sapporo can also be affected by heavy snowstorms. Cycling is also not recommended in the winter months, although if you’re a brave soul and decide to cycle, please watch out for hidden ice patches under the snow!)

There are three lines: the Namboku Line (green), the Tozai Line (orange), and the Toho Line (blue). Major stations like Sapporo and Odori provide transfers to streetcars, bus terminals, and JR lines.

The subway is in operation from approximately 06:00 to 24:00 (midnight). Operating hours may be affected on weekends and public holidays.

The Sapporo streetcar/tram runs in a loop that serves the southwestern area of downtown Sapporo where there is limited subway service. While we’re on the topic of boarding locations: most are located in the middle of busy streets, so don’t forget to look both ways before you cross!

Streetcar tickets are a flat ¥200 for adults and ¥100 for children. All fares can be paid in cash or you can use an IC card such as PASMO, SAPICA, Kitaca, or Suica.
The streetcar runs from approximately 06:00 to 23:00. Operational hours may change on weekends and public holidays.

There are two above ground train lines serving Sapporo. One runs west towards the coast and Otaru city and the other runs east towards Chitose Airport. While there are stops along these lines that bring you closer to attractions such as the Sapporo Beer Museum, Hokkaido University and Hokkaido’s Historical Village; unfortunately, both lines are really only useful if you’re traveling away from Sapporo.

All trains run through Sapporo station, the city’s main terminal. Local, limited express, and rapid trains arrive and depart from 10 platforms. All fares can be paid in cash or with one of the aforementioned IC cards.
That said, the lines are operated by JR so any cheapos lucky enough to be visiting with a JR Pass will be able to use the lines, as well as the JR Hokkaido Highway Buses, without much hassle.

Services start around 06:00 and end around 23:00. Operating hours may change on weekends, public holidays, or if there’s been heavy snowfall.

Like most cities in Japan, getting around by taxi in Sapporo can be expensive. However, if you want to get out of the weather or you just can’t be bothered lugging around your bags, a taxi can be a good option.

You can catch them either by hailing them on the street or catching one from a taxi stand. Most transport hubs and major points of interest have a taxi stand nearby.

The standard starting fare in the city is ¥670, which will get you a distance of up to 1.46km. After that, you’ll be charged an extra ¥80 for every additional 276 meters traveled. If you’re thinking of catching a taxi from New Chitose Airport, that will set you back ¥15,000 to ¥20,000, so you’re much better off hopping on a train or bus. See our guide for more about getting from New Chitose Airport to Sapporo.

For the bicycle fans out there, Sapporo recently introduced a bicycle sharing scheme called Porocle. Cycling is not only cost-effective but it’s also a nice alternative to standing around waiting for the bus.

What kind of bike can you rent? All of Porocle’s bicycles are electrically-assisted, which is great for the hilly inclines around Maruyama park. Plus, their bicycles come with the added benefit of insurance coverage so you can ride with peace of mind.

There are two ways to rent a bicycle through Porocle: registering as a member online or through an in-person application at a tourist office or an affiliated hotel.

There are no registration fees when signing up but you will need a credit card as well as a smartphone. There’s also a small charge of ¥550 (including postage) if you decide to purchase a dedicated IC card (used to unlock bikes). You don’t, however, need to purchase Porocle’s IC card, you can also use a regular IC card that you already own.

If you don’t carry a credit card, you can easily buy a day pass with cash from a tourist office, an affiliated hotel, or a convenience store. Some offices may also accept credit cards and e-money. A smart phone is still required, even for day passes, and they will hand you a dedicated IC card at the time of purchase.

Bear in mind that when renting a Porocle bike from a convenience store, some basic Japanese skills in reading and writing will be required as there is an application form to complete.

It’s important to note that in Japan children under the age of 13 years are required to wear a helmet. This year Porocle are renting helmets out for free in exchange for completing a questionnaire. Helmets are available for both adults and children so the whole family can ride together safely.

Porocle’s 2022 season is from April 9th to November 13th. Unfortunately, Porocle is not available during the winter months. The service is available 24 hours a day and day passes are valid from time of purchase until 23:59 the same day.

Travel passes are great for anyone looking to visit several sightseeing spots in one day. In Japan it’s common to pay for a one-way ticket every time you ride public transportation and, if you’re not careful, this can quickly eat away at your holiday funds.

There are 2 daily passes on offer: one for JR Hokkaido Bus and one for Hokkaido Chuo Bus. Both tickets allow unlimited travel (within the network) and are valid until the last bus of the day you intend to use the ticket.

The 1-Day JR Hokkaido bus pass is valid on local JR Hokkaido bus routes and can be purchased at JR Bus ticket centers and sales offices as well as on the bus. To use the pass, scratch off the date you intend to use it, then show it to the driver when disembarking.

The Hokkaido Chuo 1-Day bus fare is valid on all Hokkaido Chuo buses operating within Sapporo. It can be purchased on the bus (limited tickets available) or in Sapporo station from the ticket office. As with the JR Hokkaido Bus pass, scratch off the date you intend to use it, then show it to the driver when disembarking.

Note: the Chuo pass tickets explicitly state that it becomes invaild if there is more than one date scratched off.
Bonus bus info: there is a ¥100 bus that operates between Sapporo station and Susukino. It’s managed by Jotetsu buses and only accepts cash payments.

If you plan on using the subway for a large portion of the day, then you might want to consider a 1-day pass which allows unlimited trips until the last train of the day. A 1-day pass costs ¥830 for an adult and ¥420 for a child.

There is a slightly cheaper “Donichika” 1-day pass for use on weekends and national holidays as well as over the New Year period (between December 29th and January 3rd). The pass costs ¥520 for adults and ¥260 for children.

Both passes can be bought through ticket machines found in the subway ticketing halls.

For cheapos looking to save a little bit of money, the 1-Day Dosanko Pass is the way to go.

The pass can be purchased for use on weekends and national holidays as well as the New Year Holiday (between December 29th and January 3rd). The pass costs ¥360 and is a combined ticket for one adult with one child (up to 12 years of age).

There are no special day passes for JR lines in Sapporo. Anyone with a JR Pass will be able to use the local JR lines as part of the deal.

See our guide to JR Hokkaido rail passes for prices and details.

As we mentioned, IC cards can be used on transportation across Sapporo. However, Sapporo does have its own city smart card called SAPICA. This IC card is interesting because when you use a SAPICA you receive points equivalent to 10% of the fare. For example; if you spend ¥200 on a ticket, you receive 20 points. Neat, right?

SAPICA can also be used in selected drug stores and convenience stores around Sapporo (look out for the SAPICA logo in participating stores). At these stores you can earn 1 point for every ¥200 that you spend.
Points will be automatically deducted for fare payment once you have accumulated enough points to cover the fare.
Where can it be used? SAPICA can be used on Sapporo’s subway, streetcar, and bus. However, your card balance can not be used to purchase the one-day subway pass for weekends and holidays.

So, how much does it cost? The smart card will set you back ¥2. However, ¥500 is the deposit while the other ¥1 can be used towards fares. If you decide to return the card, the deposit will be refunded.

The SAPICA card can be purchased from subway stations, bus terminals, and sales offices. The card can be charged at subway ticket machines, bus offices, and in some convenience stores.