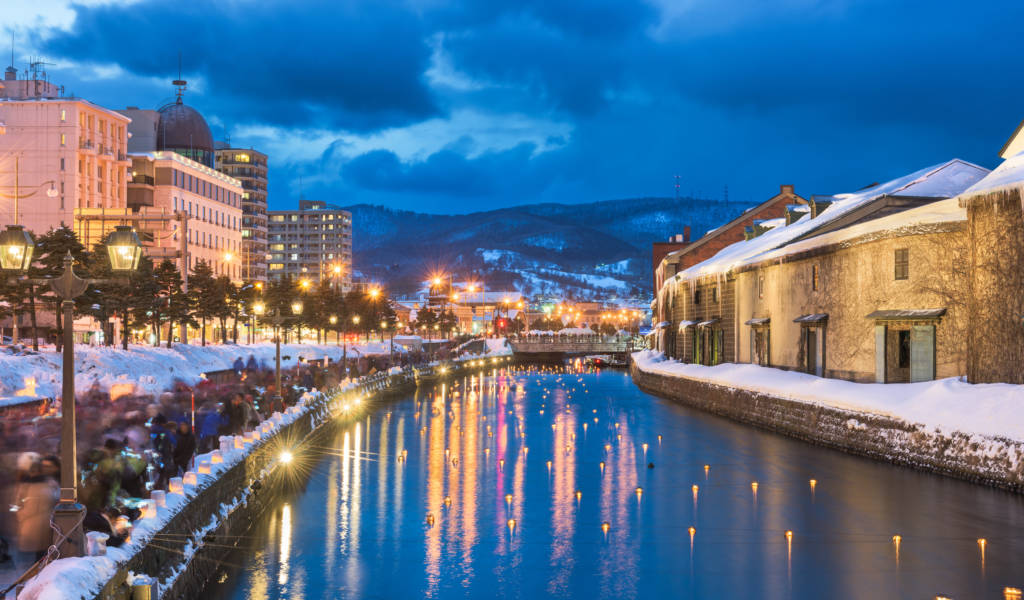 Japan's Best Winter Festivals and How to Get There from Tokyo

The Sapporo Snow Festival is an amazing experience, but there are plenty of other spectacular winter festivals in Japan. The north of Japan is filled with celebrations in the colder months — with sculptures, fire-cleansing, and snow slides making appearances in places like Akita, Nagano, and everywhere in between.

As well as seeing incredible creations, you can combine your trip with some skiing or soaking in onsen towns. Read on to learn about Japan’s top winter festivals and how to reach them from Tokyo, with or without a rail pass.

December to February in Yamagata (3.5 hrs from Tokyo)

During heavy snowfall, the trees covering the slopes of Zao Snow Village take on unusual shapes, becoming juhyō — snow monsters. In the evenings from late December to February, the monsters are illuminated. You can see them from the Zao Ropeway (¥3,500 return), which doubles as the ski lift. The town also has a great selection of onsen to try, so this is an excellent weekend getaway if you were looking for some sport and onsen action to go with your festival.

There are also a few special events during the festival. From 8 p.m. on Saturday, February 4 you can watch as around a thousand skiers and snowboarders make their way down the Uenodai Slope carrying LED lights as they slide and jump through the air. Mascots follow and the event ends with an impressive firework display. There will also be fireworks on January 14 and 15 after the Women’s Ski Jumping World Cup.

Getting to Zaō Snow Monster Festival

The nearest transit hub for Zaō is Yamagata, which is a stop on the Yamagata Shinkansen. The journey from Tokyo takes 2 hrs and 45 min and costs ¥11,450. From Yamagata, catch a bus, which costs ¥1,000 each way and takes 40 minutes, onwards to Zaō Onsen Bus Terminal. The line runs roughly hourly; full timetable here.

You can also reach Zaō Onsen via direct bus from Sendai between Dec 24 and March 12. The bus departs daily at 8 a.m. from bus stop no. 76 (outside the east exit) and arrives at 9:25 a.m. The return bus leaves Zaō Onsen at 4:30 p.m. Reservations can be made online here (in Japanese only).

Train travel between Tokyo and either Yamagata or Sendai is covered by the countrywide Japan Rail Pass as well as by several regional rail passes from JR East. Foreign residents can take advantage of JR East’s Tōhoku Area Pass, which covers travel to Yamagata. 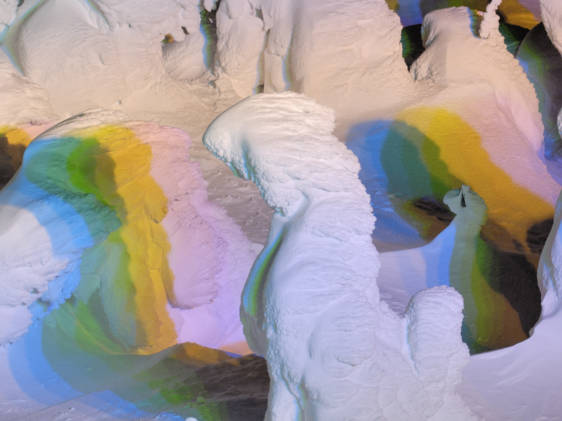 One of Japan’s three great fire festivals, the Nozawa Fire Festival is a spectacular sight with towering flames surrounded by snow. A shaden (shrine) is built from local trees, which villagers carry through the town before construction. The local Kosuge Shrine sends a priest to bless the structure and endow it with a dōsojin, a god who protects travelers. The festival is also known as the Nozawa Onsen Dōsojin Matsuri.

Then, on the 15th of January each year, a battle takes place, culminating in the shaden being set alight with burning torches. The ages of 25 and 42 are considered unlucky for men in Japan, therefore it is these ages who stand against the festive fire-lighting.

Sake is handed out and locals revel in the celebrations late into the night, so staying local is key if you want to join in! Accommodation in the area fills up fast, so be sure to book early if you want to attend (Chouchinya and Lodge Matsuya are some decently priced and centrally located options). Or consider staying somewhere nearby like Myōkō and getting a shuttle to the event.

Getting to Nozawa Onsen Dōsojin Matsuri

Pro tip: Use your time wisely and consider jumping on a tour to the festival — it also includes snow monkeys.

From Tokyo, catch the Hokuriku Shinkansen to Iiyama Station (1 hr and 45 mins). From there, hop on the bus to Nozawa Onsen VIllage — it takes around 30 minutes and costs ¥600. Alternativeley, you can take the JR Iiyama Line to Togari Nozawa Onsen Station and take a 10-minute taxi ride.

The whole journey from Tokyo costs approximately ¥9,380 one. The Shinkansen journey is covered by the Japan Rail Pass as well as JR East’s Nagano & Niigata Area Pass. 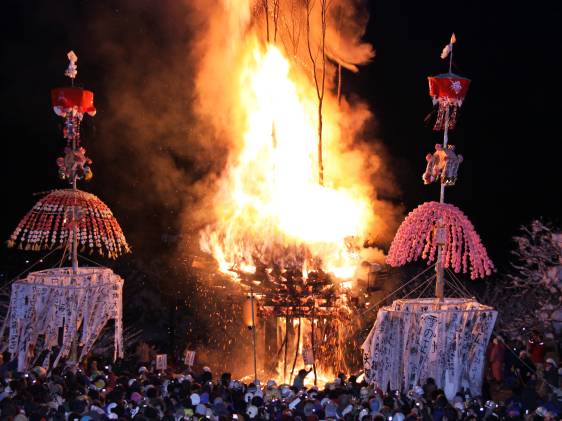 Second weekend of February in Fukushima (4 hrs from Tokyo)

A small town hosting a big festival, Tadami is well known across the region for its snow celebration featuring fireworks, ice sculptures, and more. The main sculpture rivals those seen at the Sapporo Snow Festival in size and grandeur.

There is a competition for local sculptors who have only 20 days to create their masterpiece before judging takes place. At night the main sculpture is illuminated and a fire-cleansing ritual takes place to alleviate misfortune and pray for good health. There is also a Shintō dance in the snow that sees men carry a portable shrine through the celebrations. Plus music, dance performances, food stalls, and a fireworks show to end each evening.

Getting to Tadami Snow Festival

Tadami is in eastern Fukushima prefecture, near the border with Niigata. To reach Tadami Station from Tokyo, take the Jōetsu Shinkansen to Echigo-Yuzawa or Urasa, where you can change for the JR Jōetsu line for Koide. At Koide, transfer to the JR Tadami line for Tadami Station. The total journey takes anywhere from 3 to 5 hours (depending on transfer time) and costs ¥9,440. The Tadami line in particular runs infrequently.

The whole journey is covered by the Japan Rail Pass, as well as by several regional rail passes offered by JR East. The excellent value Tokyo Wide Pass, which costs just ¥10,180 for 3 days of travel, covers the Shinkansen journey to Echigo-Yuzawa; the remaining fare is ¥1,520 one-way.

The festival site is in front of Tadami Station. 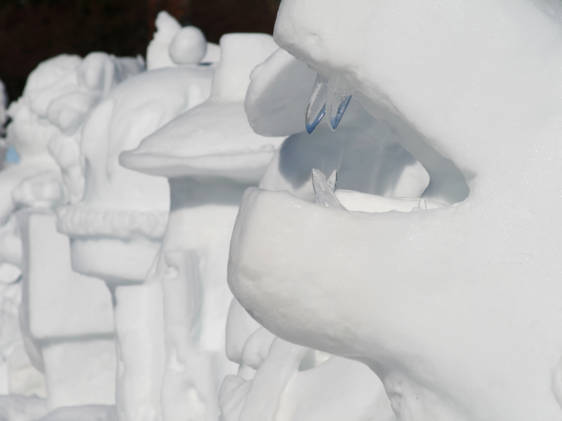 Early to mid-February in Otaru, Hokkaidō  (30 mins from Sapporo)

This once-small festival has been growing ever since it began in 1999, now attracting over 500,000 visitors each year. This is partly due to the magical displays of candle-lit snow, but also due to it being held around the same time as the Sapporo Snow Festival. And Otaru is only a 30-minute train ride away from Sapporo.

There are a variety of displays in two main areas and then countless private ones that join together to light the town as a whole. Schools, community groups, and even businesses (like KFC!) create displays that range from adorable to terrifying. The town’s central canal, one of the main spots, is covered with floating candles. The other main spot is the former Temiya Railway line, where there is a snow tunnel and plenty of great photo spots.

If you’re keen to try an onsen to warm up in the cold, you can head out to Asarigawa Onsen Town, which has its own light displays along the river as well as plenty of nice warming baths available.

Otaru is a wonderful place to explore and the festival atmosphere is fantastic. From the very dangerous-looking but extremely fun snow slides (do it, trust me) to the German beer halls, this is a community-driven festival that’ll welcome you with open arms.

From Sapporo, Otaru is an easy 30-minute, ¥1,590 limited express train journey on the JR Hakodate line. (Or a 47-min local train ride that costs ¥750). Traveling from Tokyo, it can be cheaper and quicker to fly to Sapporo than to use the train — check our Tokyo to Sapporo transport guide for details on getting between the two cities. 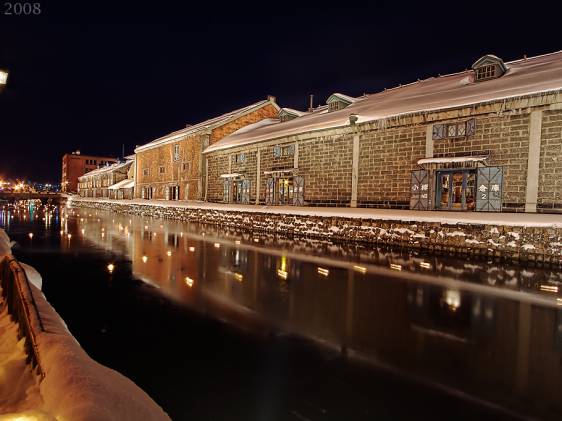 The original purpose of the Paper Balloon Festival in Akita was to pray for a good rice harvest by releasing balloons, beautifully decorated and covered in the wishes. The festival dates back to the Edo period; however, these days, the wishes aren’t limited to bountiful grain.

Some balloons are as tall as eight meters and require a small team to engineer their successful release into the night sky. A second release follows with smaller lanterns covered with personal wishes on them (since the larger ones tend to be covered in businesses’ hopes). The balloons are all made with paper and sealed with a glue made from rice. You can find some decorated with colorful depictions of famed characters. Exactly two months before the festival, people from all eight districts of the town join together to make the balloons in time.

It is recommended that you arrive before 5 p.m. to see the full event and to have an opportunity to write your own wish on one of the balloons. There will be food stalls selling local specialties as well as drinks in the park.

Getting to Kamihinokinai Paper Balloon Festival

Catch the Akita Shinkansen from Tokyo to Kakunodate (3 hrs) and switch to the Jukan Railway to take you to Kamihinokinai Station, from where it is a 5- to 10-minute walk to the main festival area.

The final 40-minute journey on the private Jukan railway is not covered by any rail passes, and costs ¥780. However, you can use a JR Pass or either a Tōhoku Area Pass or a East–South Hokkaidō Pass from JR East to cover the Shinkansen journey. The full journey would cost ¥17,800 one-way without a rail pass. 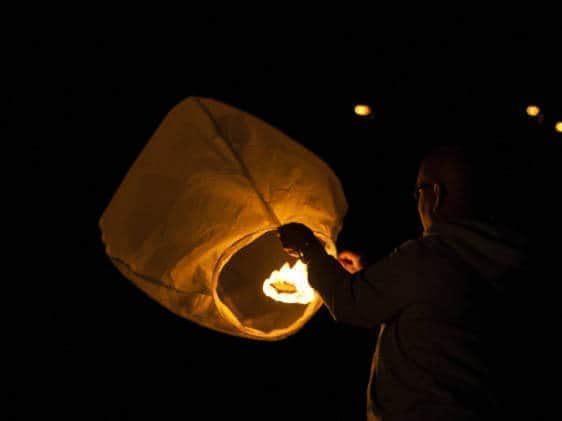 Kamakura, in addition to being a popular day trip from Toyko, means something like “snow hut” in Japanese — and that’s exactly what you’ll find at this winter wonderland festival in northern Japan. With a history dating back over 450 years, the Yokote Kamakura Snow Festival features dozens of snow structures throughout the city, each containing a snowy altar for people to pray to the water deity.

The main spots are at the Kamakurakan Hall, which is open specially for the festival and is found just past the Janosaki Bridge. The river also has a stream of glowing miniature kamakura and the local elementary school has a great display, too. Locals will be grilling rice cakes on charcoal grills and serving up warming amazake (a traditional non-alcoholic drink made from rice) to keep everyone toasty. There will also be some creative snow sculptures and traditional food stalls around the Kamakurakan Hall, so that’s a great place to start your tour!

Getting to Yokote Kamakura Snow Festival

You can reach Yokote Station quite easily from Tokyo; it takes about 3.5 to 4 hours, depending on transfer time. Take the Akita Shinkansen to Ōmagari Station (3 hrs and 15 mins) before changing to the local JR Ou line for the final 15-minute journey to Yokote. The whole trip costs approximately ¥17,350 one-way, but is covered completely by the countrywide JR Pass as well as the Tōhoku Area Pass and the East–South Hokkaidō Pass from JR East. 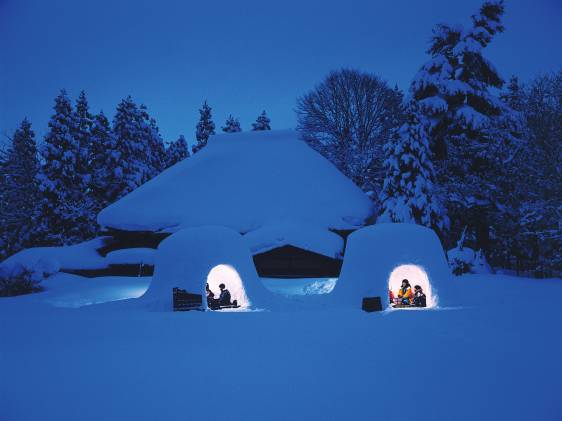 This post was originally published in December 2017. Last updated: November 2022.