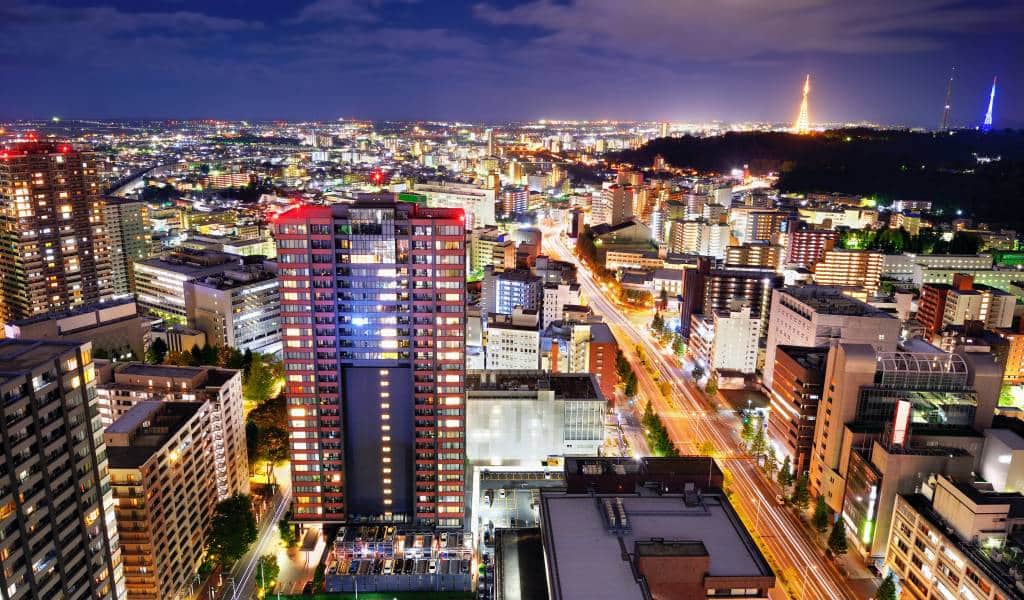 Sendai in Miyagi Prefecture is the Tohoku region’s largest city and the largest metropolis between the Kanto region and Sapporo in Hokkaido. While it is a little sleepier than some of Japan’s bigger cities, Sendai makes up for it with some amazing local cuisine. It’s also a convenient place to stay for visiting scenic Matsushima.

Sendai is a green city with delicious beef tongue dinners and a gateway to the Tohoku area.

This former feudal capital in northern Japan is also known as 杜の都 (Mori no miyako, Japanese for “the city of trees”) for its many green spaces and tree-lined streets. With about a million people, it is one of the bigger cities in Japan yet very comfortable to get around and much less crowded than other places in the country. Highlights include temples, shrines, and the largest Buddhist statue in Japan, as well the local specialty beef tongue.

Situated about 350 km northeast of Tokyo, Sendai is the capital of Miyagi Prefecture and the gateway to the Tohoku region.

It is a 90–120 minute ride on the Tohoku Shinkansen, with different options available for around ¥12,000, more or less depending on the speed of the train you choose. Consider buying a Japan Rail Pass. You can also access Sendai with some of JR East Passes.

The cheapest option is definitely taking a highway bus. Fares start from as low as ¥2,800 one way. The buses usually leave Tokyo late at night and get you to Sendai around 5 am or 6 am the next morning.

Kosoku Bus offers several routes to Sendai (and here’s where to go for the return journey).

You could even take a local train up to Sendai. From Tokyo, this would take you around six hours (including five transfers) and cost around ¥6,000–¥7,000. Highway buses take a similar amount of time but can be reserved from about half the price—and you’re guaranteed a seat.

However, if you are in Japan during Seishun 18 ticket season, which coincides with the big holidays, the super-cheap pass allows five days (consecutive or not) of unlimited travel on local and rapid JR trains for ¥12,050. The ticket can also be split between up to five people!

Finally, you could also fly to Sendai Airport, which is about 25 minutes from the city center. While air tickets for the one-hour flight can be sometimes cheaper than the bullet train, you have to factor in the airport train costs to Narita before clicking “buy”. All in all it might take you longer and cost you more than the train ride.

With the convenience of the Shinkansen, flying from Tokyo is not common. However, there are plenty of flights to other places in Japan and East Asia.

Here is a detailed review of all the options of getting from Tokyo to Sendai.

Getting around the city

Central Sendai is quite walkable, with lots of restaurants around the station, along the Chuo-dori arcade and in the Kokubuncho neighborhood.

The city’s subway has two lines: the north-south Namboku Line and the east-west Tozai Line. The lines intercept at Sendai Station. IC cards such as Suica, Pasmo and Icoca can be used on the JR Lines and the subway.

There is also a tourist sightseeing bus called Loople (pronounced ruupuru), which (as the name suggests) runs a loop of sightseeing spots in the city. A single trip is ¥260 while a hop-on/hop-off day pass costs ¥630. A one-day Loople and subway pass is ¥920

Attractions reachable on the Loople include Sendai Mediatheque and the Aoba Castle ruins. The bus leaves from the west exit of Sendai Station.

Pro tip: Once you’re in town, pick up a one-day Sendai Area Pass or two-day Sendai Marugoto Pass for discounts on trains and buses in and between Sendai, Matsushima and Yamadera.

What to do in Sendai

Sendai was bombed flat in the war and rebuilt, so it doesn’t exactly boast as many historical sights as other Japanese cities. But there are a few highlights absolutely worth checking out.

The Osaki Hachiman Shrine is another highlight and designated as a national treasure.

Rinno-ji Temple is a historical temple adorned with a beautiful garden and ponds. The temple offers free Zazen meditation on Saturdays, 6:25 pm to 8 pm. English instructions are available

Locals often recommended visiting the ruins of Aoba Castle, where Lord Date Masumune resided. The site has a replica castle gate and a statue of its lord.

Zuihoden is the mausoleum of Lord Masamune and adorned in traditional ornate style.

There are also a few contemporary sites worth checking out in the capital of Miyagi Prefecture. The SS30 Building Observation Lounge is free of charge and gives you a few of the city from the 30th floor. The Miyagi Museum of Art (modern art), Sendai City Museum or The Museum of the Forest of Depths of the Earth (Stone Age) might interest those that like to roam indoors.

If you wanna go souvenir shopping, make sure to pick up a typical Japanese wooden doll, called kokeshi. They were conceived here in Miyagi.

Finally, you absolutely must have grilled beef tongue called gyutan in Japanese (unless you are vegetarian, in which case try a macrobiotic restaurant). Also, try some zundamochi, which is the local sweet, rice balls filled with green soybean paste.

Here is a sample sightseeing guide for a full day in Sendai.

All Articles about Sendai