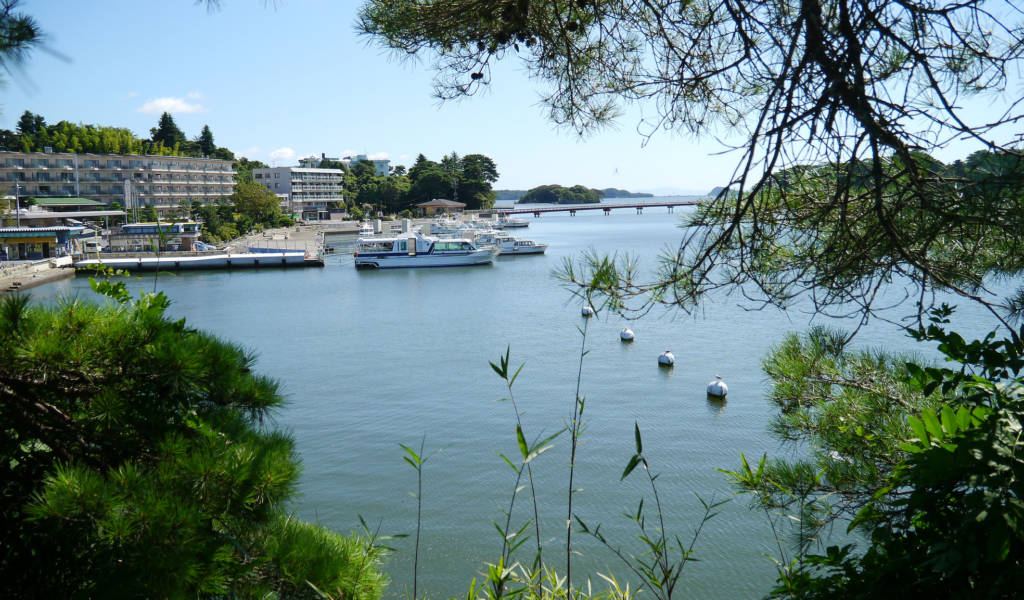 A short train ride out of the city of Sendai lies Matsushima in Miyagi Prefecture. A small town on an island-dotted bay so beautiful that it rendered famous poet Matsuo Basho speechless. And not much left Basho lost for words: he managed a haiku about this gorgeous place, after all. Four hundred years later, Matsushima has lost none of its charms. Still considered one of the Three Great Views of Japan, the Bay of Pines rewards visitors with temples, bridges, caves and islands, with a view at every turn. In this article we explore the temple complex of Zuiganji, the island of Fukuurajima, and one or two other drawcards.

Zuiganji was founded in 828 as a temple in the Tendai Sect of Buddhism, converted to Zen Buddhism in the Kamakura Period, and then became gently inconsequential until Date Masamune restored it as the family temple of his daimyo clan in 1609 at the beginning of the Edo Period. Travelers to Tohoku will be familiar with Masamune’s frankly terrifying helmet, and won’t be surprised to find that although Zuiganji is a temple, it has some elements of fortification that are pretty rare for religious precincts, such as watchtowers and nightingale floors. Masamune spared no expense in restoring Zuiganji to glory: he rebuilt it in the Momoyama style, importing cedar, cypress and zelkova wood from as far away as the Kumano Mountains and bringing in craftsmen from all over Japan. The result is one of Tohoku’s most alluring spots to spend an afternoon.

Visitors approach the temple complex through a gate off a busy shopping street. Beyond the gate is a park, and an avenue of vast cedars (some of which were lost to the 2011 tsunami). The temple complex itself consists of the Hondo, built in 1609, the Zen kitchen known as the Kuri, and the Suiryuden museum, which houses the complex’s treasures and many of the Masamune clan’s artifacts.

The Hondo is a beautifully preserved wood-and-plaster building facing the bay. Visitors are free to explore (barefoot/in socks) the eleven rooms that have been restored to their original pristine 1622 state, with tatami, gold-leaf paintings, elegant woodwork, and screens. Take particular note of the Peacock Panel in the shitchu kujaku no ma, the one-of-a-kind Chinese rounded sliding doors of the jodan no ma, and the original, unrestored ink paintings of the sumie no ma. Also of note are the Emperor’s Entrance, or onari genkan, and Kuri. The Hondo also offers views of the mossy temple grounds, which are as serene in summer as they were on the still autumn day I visited, and the main courtyard with its toro lantern, white pine, and twin Korean plum trees.

Visitors should allow about 1 hour to 90 minutes to fully appreciate the Zuiganji grounds, and be sure to include time to make a leisurely circuit of the Seiryuden museum, the admission to which is included in the temple’s ¥700 entrance fee. The museum’s rotating collection includes some 30,000 objects, including Date Masamune’s armor, weapons, household items, calligraphy, over 200 wall paintings, gold-leaf fusuma doors, and Masamune’s large wakizashi sword. There are also many small hand-carved caves in the limestone rock in the temple area; these were used by monks practicing zazen mediation, but are now repositories for devotional tablets and effigies.

Temples in Matsushima don’t end at Zuiganji: there’s Entsuin Temple (where Date Masamune is buried), Tenrinin, and Godaido as well. Godaido is overseen by Zuiganji, and it’s situated across the road on a small island. The main structure there is a Buddhist worship hall, with representations of signs of the Chinese Zodiac, and images of the Five Wisdom Kings: Fudo, Gozanze, Daiitoku, Gundari and Kongo Yasha. It is this quintet that gives Godaido its name. But watch your step on the bridge: if you miss your footing, it’s a sign you’re not ready to visit the temple yet.

Note: Some parts of the Zuiganji complex are closed to the public due to ongoing restoration work. Free English-speaking guides, volunteers from the Matsushima Goodwill Guide Association, are available between 10am and 3pm on Sundays, the second Friday of the month, and national holidays.

Matsushima Bay: Fukuurajima and the islands

Leaving Zuiganji by the main gate, walk back onto the main road and join the flow of pedestrians. Head away from the station and look for Cafe Bayland, the gate to Fukuurabashi and uninhabited Fukuurajima. For a small fee paid at the cafe, you walk out onto the quarter-kilometer-long bridge (reconstructed following the 2011 tsunami) and out to Fukuurajima, the archipelago’s largest island.

The island is well signposted and offers a number of paved walking paths, bathrooms, a picnic area, and lookout points handily supplied with signs telling you the names of the islands you can see. And there are 260 tiny islands (aka shima), mostly covered in pines (aka matsu), so you will need the map. If you care about island names, that is, and there’s a chance you’ll be too stunned by the view to really care what things are called. The island also has a small temple of Benzaiten, and if you leave the path you can pick your way over stones and roots to find small, secluded views of the bay.

Allow about an hour to see the island properly, but prepare to be slower: it’s not somewhere you can march around, ticking off viewpoints, on a strict timetable.

If for some reason you can’t get onto an island, there are several places on the mainland where you can get a great view of the bay: Shin-Tomiyama Overlook in Matsushima itself; Otakamori, on the eastern arm of the bay in neighboring Higashimatsushima municipality; and Tamonzan in Shichigahama to the south.

Temples, islands, museums and where to get lunch

Matsushima is famous for its seafood, particularly oysters farmed in the bay. There are many seafood kiosks along the main street, all selling fresh fish and shellfish straight off the grill for fairly reasonable prices. Oysters are on offer pretty much everywhere, but try the oyster grill at Matsushima Fish Market for year-round deliciousness: oyster burgers, grilled oysters, or raw. If kaki aren’t your jam you could try the region’s signature fish dish: sasa kamaboko.

Kamaboko are found, in various forms, everywhere in Japan, a result of the nation’s fish-rich diet. Flaked or minced white fish is seasoned, spiced and shaped, then steamed or grilled. In Miyagi, and particularly in Matsushima, the shape is that of a bamboo leaf. A popular option at pretty much all eateries, you can also get them as omiyage packs at gift shops.

If fish isn’t your thing, the other local specialty is gyutan. This is beef tongue, which became popular in WWII. Matsushima has a few gyutan joints, including Gyutan Sumiyaki Rikyu and Gyutan No Mise Akama Seinikuten, both on the main road. Variations available, apart from the plain grilled classic version, are gyutan kare raisu and gyutan doria, a Japanified take on the Western gratin dish with rice replacing pasta. Both are delicious.

If you just want a quick nibble, Cafe Shokado offers an array of hot drinks, cold drinks and pastry snacks.

Tohoku is a relatively rare destination for Western tourists, and that’s a crying shame—it’s friendly, relatively cheap all around, and jaw-droppingly beautiful. Sendai, the capital of Miyagi Prefecture, is but a short Shinkansen ride from Tokyo, so technically you could do this as a day trip, but it’s far better to take your time and spend at least one night there (possibly at this cheapo’s top pick, the delightful Richmond Hotel). Tokyo’s great, but heading into Tohoku is well worth the extra steps it takes to get there. And by extra steps, we mean picking up a Japan Rail Pass and a bento lunch and sitting in comfort on a fast train for an hour or two. For an idea of what you can do, check out this itinerary.

If you’ve already made it to Sendai, firstly: congratulations on your good choice! To get to Matsushima’s waterfront, head for Matsushimakaigan Station on the JR Senseki Line. The small regional station is a very short walk from the main road running along the sea, with all attractions and eateries within an easy stroll.

While we do our best to ensure it’s correct, information is subject to change.

Written by: Kylie Van Zyl
Filed under: Things to Do
Tags:
Sharing